The longest and deepest downturn in the history of the United States and the modern industrial economy lasted more than a decade, beginning in 1929 and ending during World War II in 1941. 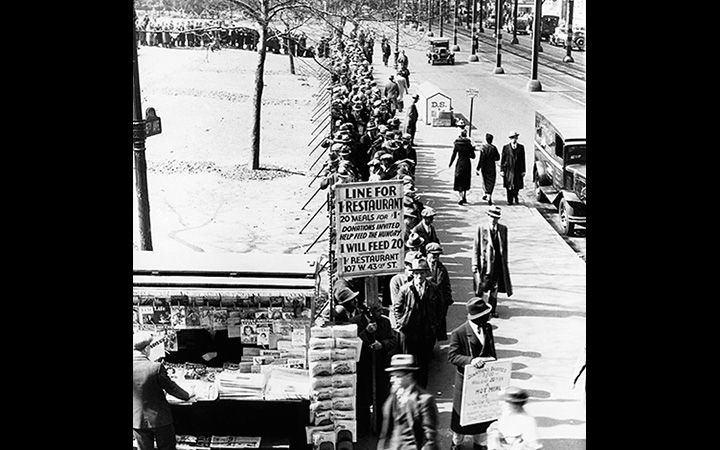 “Regarding the Great Depression, … we did it. We’re very sorry. … We won’t do it again.”
—Ben Bernanke, November 8, 2002, in a speech given at “A Conference to Honor Milton Friedman … On the Occasion of His 90th Birthday.”

In 2002, Ben Bernanke, then a member of the Federal Reserve Board of Governors, acknowledged publicly what economists have long believed. The Federal Reserve’s mistakes contributed to the “worst economic disaster in American history” (Bernanke 2002).

Bernanke, like other economic historians, characterized the Great Depression as a disaster because of its length, depth, and consequences. The Depression lasted a decade, beginning in 1929 and ending during World War II. Industrial production plummeted. Unemployment soared. Families suffered. Marriage rates fell. The contraction began in the United States and spread around the globe. The Depression was the longest and deepest downturn in the history of the United States and the modern industrial economy.

The Great Depression began in August 1929, when the economic expansion of the Roaring Twenties came to an end. A series of financial crises punctuated the contraction. These crises included a stock market crash in 1929, a series of regional banking panics in 1930 and 1931, and a series of national and international financial crises from 1931 through 1933. The downturn hit bottom in March 1933, when the commercial banking system collapsed and President Roosevelt declared a national banking holiday.1  Sweeping reforms of the financial system accompanied the economic recovery, which was interrupted by a double-dip recession in 1937. Return to full output and employment occurred during the Second World War.

To understand Bernanke’s statement, one needs to know what he meant by “we,” “did it,” and “won’t do it again.”

By “we,” Bernanke meant the leaders of the Federal Reserve System. At the start of the Depression, the Federal Reserve’s decision-making structure was decentralized and often ineffective. Each district had a governor who set policies for his district, although some decisions required approval of the Federal Reserve Board in Washington, DC. The Board lacked the authority and tools to act on its own and struggled to coordinate policies across districts. The governors and the Board understood the need for coordination; frequently corresponded concerning important issues; and established procedures and programs, such as the Open Market Investment Committee, to institutionalize cooperation. When these efforts yielded consensus, monetary policy could be swift and effective. But when the governors disagreed, districts could and sometimes did pursue independent and occasionally contradictory courses of action.

The governors disagreed on many issues, because at the time and for decades thereafter, experts disagreed about the best course of action and even about the correct conceptual framework for determining optimal policy. Information about the economy became available with long and variable lags. Experts within the Federal Reserve, in the business community, and among policymakers in Washington, DC, had different perceptions of events and advocated different solutions to problems. Researchers debated these issues for decades. Consensus emerged gradually. The views in this essay reflect conclusions expressed in the writings of three recent chairmen, Paul Volcker, Alan Greenspan, and Ben Bernanke.

By “did it,” Bernanke meant that the leaders of the Federal Reserve implemented policies that they thought were in the public interest. Unintentionally, some of their decisions hurt the economy. Other policies that would have helped were not adopted.

An example of the former is the Fed’s decision to raise interest rates in 1928 and 1929. The Fed did this in an attempt to limit speculation in securities markets. This action slowed economic activity in the United States. Because the international gold standard linked interest rates and monetary policies among participating nations, the Fed’s actions triggered recessions in nations around the globe. The Fed repeated this mistake when responding to the international financial crisis in the fall of 1931. This website explores these issues in greater depth in our entries on the stock market crash of 1929 and the financial crises of 1931 through 1933.

One reason that Congress created the Federal Reserve, of course, was to act as a lender of last resort. Why did the Federal Reserve fail in this fundamental task? The Federal Reserve’s leaders disagreed about the best response to banking crises. Some governors subscribed to a doctrine similar to Bagehot’s dictum, which says that during financial panics, central banks should loan funds to solvent financial institutions beset by runs. Other governors subscribed to a doctrine known as real bills. This doctrine indicated that central banks should supply more funds to commercial banks during economic expansions, when individuals and firms demanded additional credit to finance production and commerce, and less during economic contractions, when demand for credit contracted. The real bills doctrine did not definitively describe what to do during banking panics, but many of its adherents considered panics to be symptoms of contractions, when central bank lending should contract. A few governors subscribed to an extreme version of the real bills doctrine labeled “liquidationist.” This doctrine indicated that during financial panics, central banks should stand aside so that troubled financial institutions would fail. This pruning of weak institutions would accelerate the evolution of a healthier economic system. Herbert Hoover’s secretary of treasury, Andrew Mellon, who served on the Federal Reserve Board, advocated this approach. These intellectual tensions and the Federal Reserve’s ineffective decision-making structure made it difficult, and at times impossible, for the Fed’s leaders to take effective action.

These differences of opinion contributed to the Federal Reserve’s most serious sin of omission: failure to stem the decline in the supply of money. From the fall of 1930 through the winter of 1933, the money supply fell by nearly 30 percent. The declining supply of funds reduced average prices by an equivalent amount. This deflation increased debt burdens; distorted economic decision-making; reduced consumption; increased unemployment; and forced banks, firms, and individuals into bankruptcy. The deflation stemmed from the collapse of the banking system, as explained in the essay on the banking panics of 1930 and 1931.

The Federal Reserve could have prevented deflation by preventing the collapse of the banking system or by counteracting the collapse with an expansion of the monetary base, but it failed to do so for several reasons. The economic collapse was unforeseen and unprecedented. Decision makers lacked effective mechanisms for determining what went wrong and lacked the authority to take actions sufficient to cure the economy. Some decision makers misinterpreted signals about the state of the economy, such as the nominal interest rate, because of their adherence to the real bills philosophy. Others deemed defending the gold standard by raising interests and reducing the supply of money and credit to be better for the economy than aiding ailing banks with the opposite actions.

The reforms of the 1930s, ’40s, and ’50s turned the Federal Reserve into a modern central bank. The creation of the modern intellectual framework underlying economic policy took longer and continues today. The Fed’s combination of a well-designed central bank and an effective conceptual framework enabled Bernanke to state confidently that “we won’t do it again.”