The Emergency Relief and Construction Act of 1932 added Section 13(3) to the Federal Reserve Act, expanding the Fed's ability to make certain loans under "unusual and exigent circumstances." 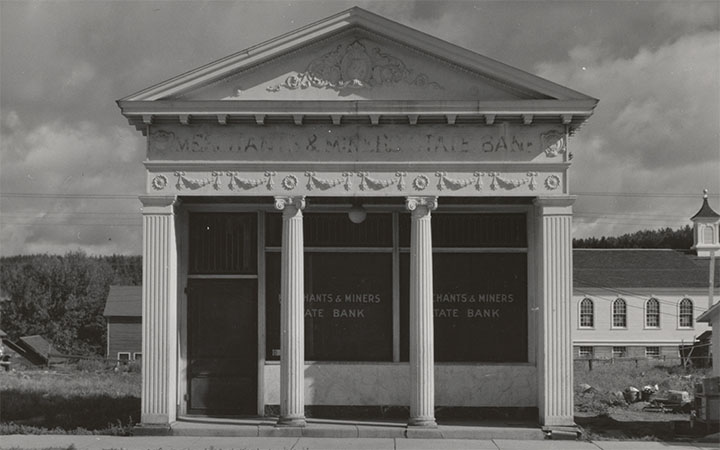 (Public domain photograph by Russell Lee via New York Public Library)
David C. Wheelock, Federal Reserve Bank of St. Louis
Thousands of commercial banks failed during the early years of the Great Depression, and many that survived became more cautious in their lending to firms and other borrowers. Fed officials were concerned that some credit-worthy borrowers were unable to obtain loans to keep their businesses afloat and urged Congress to act. Fed governor Charles Hamlin wrote to Senate Banking Committee Chair Carter Glass, “I firmly believe, but cannot prove, that there are many merchants in the United States today who are unable to obtain credit, although they can give satisfactory collateral. I know that there are large areas where there are no banks left. I therefore, personally, would favor giving this power in emergencies to Federal Reserve Banks."1

Congress responded to the Fed’s request by amending the Federal Reserve Act to allow the Reserve Banks to make loans to creditworthy borrowers that were unable to obtain adequate loans from other sources. The provision was included in the Emergency Relief and Construction Act of 1932, enacted July 21, 1932, and added paragraph 3 to Section 13 of the Federal Reserve Act. The amendment limits lending under Section 13(3) to “unusual and exigent circumstances” and requires an authorizing vote of at least five members of the Federal Reserve Board. Further, borrowers must post acceptable collateral and demonstrate that they cannot obtain adequate credit from other sources.

On July 26, 1932, the Federal Reserve Board granted temporary authority to the Reserve Banks to make loans under Section 13(3). The Board renewed the authorization at six-month intervals to July 31, 1936. The Reserve Banks made 123 Section 13(3) loans totaling just $1.5 million during the four-years; the largest loan was for $300,000. The program was likely not used more heavily because the Fed set the interest rate on Section 13(3) loans above the discount rate on loans to member banks and because amendments to the Federal Reserve Act in 1933 and 1934 provided new avenues for the Fed to lend directly to individuals and firms on more favorable terms.2

The Fed’s lending under Section 13(3) in 2007-08 was extensive, peaking at $710 billion in November 2008,4 and included controversial loans to protect the creditors of the investment bank Bear Stearns and the giant insurance company AIG. Although arguably important for preventing more widespread disruption to the financial system and resulting in no losses to the Federal Reserve or taxpayers, the loans were politically unpopular. Hence, as part of a broader reform of the financial system under the Dodd-Frank Wall Street Reform and Consumer Protection Act of 2010, Congress amended Section 13(3) to prohibit loans to individual firms except through programs that are broadly available to many firms. Further, Dodd-Frank requires the Fed to obtain prior approval from the Secretary of the Treasury before establishing any lending facility under Section 13(3).

When financial markets were disrupted by the COVID-19 pandemic in 2020, the Fed again turned to Section 13(3) and established several programs to provide liquidity to the U.S. financial system. The programs included facilities to support lending to small and medium-sized businesses, municipalities, corporations, the commercial paper market, and money market mutual funds, among others. The programs were wound down over the ensuing months as financial conditions improved and normal credit flows resumed.