During the 2007-09 financial crisis, the Federal Reserve helped to resolve difficulties at some institutions, such as Bear Stearns and AIG, while allowing others like Lehman Brothers to fail. 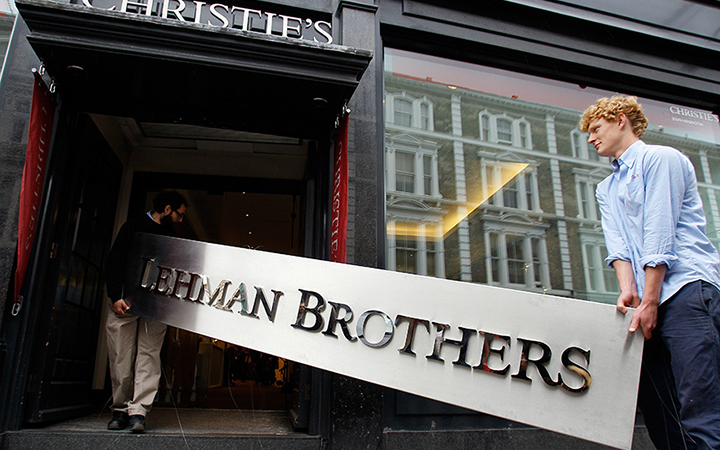 Financial distress at several large financial firms in 2008 played a prominent role in the 2007-09 financial crisis. Several of these institutions were not commercial banks and therefore not the types of institutions to which the Federal Reserve typically provides support. Nonetheless, the Federal Reserve intervened to support some of these institutions, motivated by a desire to avert disorderly failures that could have harmed the US economy more broadly. Bear Stearns, an investment bank, was acquired by JPMorgan Chase (JPMC) in the spring of 2008 in a transaction that was assisted by the Federal Reserve Bank of New York (FRBNY). Lehman Brothers, an investment bank, filed for bankruptcy on September 15, 2008. The next day, AIG, a large insurance and financial services company received support from the FRBNY. In addition, Citigroup and Bank of America, which are commercial banking institutions, each sought specific support programs protecting against losses on specific asset pools.

Bear Stearns was one of the largest securities firms in the country, with assets of approximately $400 billion in March 2008. The financial condition of the firm deteriorated markedly between mid-January and mid-March 2008. On March 13, 2008, Bear Stearns notified the Federal Reserve that it expected that it would not have enough funding or liquid assets to meet its obligations the following day and would not be able to find a private sector source of alternative financing. On Friday, March 14, 2008, the Board of Governors of the Federal Reserve System authorized the FRBNY to extend credit to Bear Stearns through JPMC. The loan from the FRBNY was for $12.9 billion and was secured by assets valued at $13.8 billion; it was extended under the authority of Sections 10B and 13(3) of the Federal Reserve Act.1

Despite the receipt by Bear Stearns of Federal Reserve funding through the JPMC bridge loan on Friday, March 14, 2008, market pressures on Bear Stearns worsened that day and during the weekend. On Sunday, March 16, Bear Stearns accepted an offer to merge with JPMC in a transaction facilitated by the FRBNY. The FRBNY created a limited liability company, Maiden Lane LLC, to purchase illiquid assets from the books of Bear Stearns. The FRBNY extended credit to the LLC, which would then manage those assets through time. Maiden Lane LLC purchased approximately $30 billion in assets from Bear Stearns with a loan of approximately $29 billion from the FRBNY. Under the terms of the agreement, JPMC also lent roughly $1 billion to Maiden Lane in a loan that was subordinated to the loan from the FRBNY for repayment purposes. The loan to Maiden Lane LLC also was extended under the authority of Section 13(3) of the Federal Reserve Act. Complete details of the transactions can be found on the Board's website.

AIG is a global financial services company that had approximately $1 trillion in reported assets in mid-2008. Through an unregulated subsidiary, AIG had entered into credit default swaps in which it insured counterparties against losses on particular debt instruments, many of them mortgage-related. In response to market developments in September, many counterparties, acting on their contractual rights, pressed AIG to post collateral to guarantee performance, which AIG was unable to do without assistance. On September 16, 2008, the FRBNY extended credit to AIG, as authorized by the Board of Governors under Section 13(3) of the Federal Reserve Act. In consideration for this credit extension, the US Department of Treasury received a 79.9 percent equity interest in AIG. On November 10, 2008, the Federal Reserve and the Treasury announced a restructuring of the arrangement; the Treasury purchased preferred shares using funds from the Troubled Asset Relief Program, a portion of the funds were used to reduce the loan from the FRBNY, and the FRBNY extended the maturity of the remaining loan. A further restructuring took place in March 2009. Complete details of Federal Reserve and Treasury intervention in AIG can be found on the Board's website.

The bankruptcy of Lehman Brothers stands in contrast to the resolution of difficulties at Bear Stearns and AIG. During the weekend prior to the bankruptcy, the Federal Reserve, the US Treasury, and the Securities and Exchange Commission brought together leaders of the major financial firms to attempt to devise a private-sector solution to Lehman’s situation. They were unsuccessful, and early Monday, September 15, Lehman formally filed for bankruptcy. Although Lehman Brothers did not receive an institution-specific support program, such as those for Bear Stearns and AIG, its primary dealer subsidiary did participate in special credit facilities for primary dealers. On September 12, 2008, the Friday immediately prior to the bankruptcy filing, Lehman Brothers’ primary dealer subsidiary had $18.5 billion in lending outstanding at the Term Securities Lending Facility.2 On Monday, September 15, Lehman’s primary dealer subsidiary borrowed $28 billion through the Primary Dealer Credit Facility. Both were programs set up earlier in 2008 under Section 13(3) of the Federal Reserve Act. All borrowing ceased on September 18, 2008.

The afternoon of September 16, a prominent money market fund announced that it would not be able to continue to redeem its shares at the usual price of $1 per share because of losses on Lehman commercial paper that it held. Following that announcement, many investors withdrew money from money market funds that were not restricted by charter to holding only US Treasury and federal agency obligations. Investor withdrawals caused many such funds to sell some of their holdings of commercial paper. Some investors transferred balances to so-called government-only funds, but some left money market funds altogether. To stem these outflows, the Department of the Treasury subsequently announced that it would establish a temporary guarantee program for US money market funds and the Federal Reserve established the Asset-backed Commercial Paper Money Market Mutual Fund Liquidity Facility.

Citigroup, one of the three largest US banking organizations at the time, experienced growing losses in its portfolio in 2008, including on mortgage-related assets. On November 23, 2008, the Treasury, the Federal Reserve, and the Federal Deposit Insurance Corporation (FDIC) jointly announced that the US government would provide support to Citigroup. The Treasury and the FDIC provided protection against the possibility of unusually large losses on an asset pool of approximately $306 billion of loans and securities backed by residential and commercial real estate and other such assets, which remained on Citigroup's balance sheet. As a fee for this arrangement, Citigroup issued preferred shares to the Treasury and FDIC. The FRBNY agreed to provide a backstop commitment to absorb residual risk in the asset pool through a non-recourse loan. In addition, Treasury invested $20 billion in Citigroup from the TARP in exchange for preferred stock with an 8 percent dividend to the Treasury. In December 2009, the Treasury, the Federal Reserve, and the FDIC agreed to terminate the Master Agreement dated January 15, 2009, with Citigroup. In return for the termination of the agreement, Citigroup agreed to pay FRBNY $50 million.

When Bank of America, another large US banking organization, acquired Merrill Lynch in late 2008, it assumed a large portfolio of mortgage-related assets. On January 16, 2009 the Treasury, the Federal Reserve, and the FDIC jointly announced that the US government would provide support to Bank of America. Protection would have been provided against a pool of approximately $118 billion in assets, the large majority of which were the result of the Merrill Lynch acquisition, on terms analogous to those extended to Citigroup, and an investment by the TARP would have provided support to Bank of America. The full arrangement was never implemented, however. On May 7, 2009, following the release of the results of the Supervisory Capital Assessment Program, Bank of America announced that it did not plan to move forward with the announced asset protection arrangement. In September 2009, Bank of America paid an exit fee of $425 million to the Treasury, the FDIC, and the Federal Reserve in order to terminate the arrangement.

Board of Governors of the Federal Reserve System. “Appendix B, Monthly Report on Credit and Liquidity Programs and the Balance Sheet.” Last updated August 2, 2013, http://www.federalreserve.gov/monetarypolicy/clbs_appendixb_201008.htm.

Board of Governors of the Federal Reserve System. “Bank of America.” Last updated August 2, 2013, http://www.federalreserve.gov/newsevents/reform_boa.htm.

Board of Governors of the Federal Reserve System. “Citigroup.” Last updated August 2, 2013, http://www.federalreserve.gov/newsevents/reform_citi.htm.

Board of Governors of the Federal Reserve System. “Credit and Liquidity Programs and the Balance Sheet.” Last updated February 5, 2010, http://www.federalreserve.gov/monetarypolicy/bst_lendingprimary.htm.

Board of Governors of the Federal Reserve System. “Credit and Liquidity Programs and the Balance Sheet.” Last updated October 17, 2014,  http://www.federalreserve.gov/monetarypolicy/bst_supportspecific.htm.

Board of Governors of the Federal Reserve System. “Joint Statement by Treasury, Federal Reserve, and the FDIC on Citigroup.” November 23, 2008, http://www.federalreserve.gov/newsevents/press/bcreg/20081123a.htm.