Lasting from December 2007 to June 2009, this economic downturn was the longest since World War II. 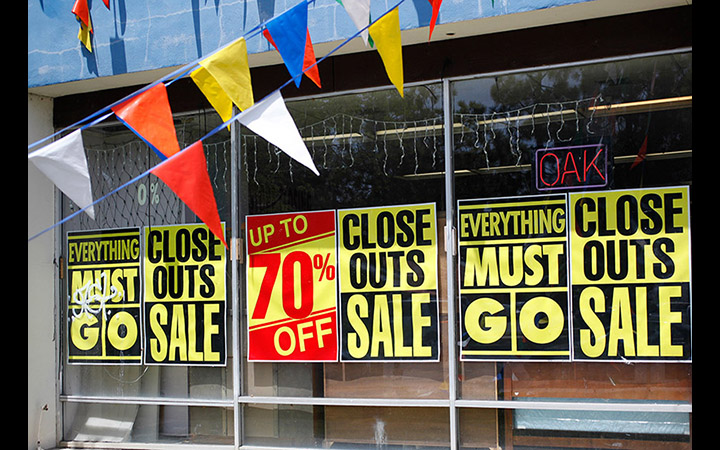 The Great Recession began in December 2007 and ended in June 2009, which makes it the longest recession since World War II. Beyond its duration, the Great Recession was notably severe in several respects. Real gross domestic product (GDP) fell 4.3 percent from its peak in 2007Q4 to its trough in 2009Q2, the largest decline in the postwar era (based on data as of October 2013). The unemployment rate, which was 5 percent in December 2007, rose to 9.5 percent in June 2009, and peaked at 10 percent in October 2009.

The financial effects of the Great Recession were similarly outsized: Home prices fell approximately 30 percent, on average, from their mid-2006 peak to mid-2009, while the S&P 500 index fell 57 percent from its October 2007 peak to its trough in March 2009. The net worth of US households and nonprofit organizations fell from a peak of approximately $69 trillion in 2007 to a trough of $55 trillion in 2009.

As the financial crisis and recession deepened, measures intended to revive economic growth were implemented on a global basis. The United States, like many other nations, enacted fiscal stimulus programs that used different combinations of government spending and tax cuts. These programs included the Economic Stimulus Act of 2008 and the American Recovery and Reinvestment Act of 2009.

The Federal Reserve’s response to the crisis evolved over time and took a number of nontraditional avenues. Initially, the Fed employed “traditional” policy actions by reducing the federal funds rate from 5.25 percent in September 2007 to a range of 0-0.25 percent in December 2008, with much of the reduction occurring in January to March 2008 and in September to December 2008. The sharp reduction in those periods reflected a marked downgrade in the economic outlook and the increased downside risks to both output and inflation (including the risk of deflation).

With the federal funds rate at its effective lower bound by December 2008, the FOMC began to use its policy statement to provide forward guidance for the federal funds rate. The language made reference to keeping the rate at exceptionally low levels “for some time” (Board of Governors 2008) and then “for an extended period” (Board of Governors 2009a). This guidance was intended to provide monetary stimulus through lowering the term structure of interest rates, increasing inflation expectations (or decreasing prospects of deflation), and reducing real interest rates. With the recovery from the Great Recession slow and tenuous, the forward guidance was strengthened by providing more explicit conditionality on specific economic conditions such as “low rates of resource utilization, subdued inflation trends, and stable inflation expectations” (Board of Governors 2009b). This was followed by the explicit calendar guidance in August 2011 of “exceptionally low levels for the federal funds rate at least through mid-2013” and eventually by economic-threshold-based guidance for raising the funds rate from its zero lower bound, with the thresholds based on the unemployment rate and inflationary conditions (Board of Governors 2012). This forward guidance can be seen as an extension of the Federal Reserve’s traditional policy of affecting the current and future path of the funds rate.

In addition to its forward guidance, the Fed pursued two other types of “nontraditional” policy actions during the Great Recession. One set of nontraditional policies can be characterized as credit easing programs that sought to facilitate credit flows and reduce the cost of credit, as discussed in more detail in “Federal Reserve Credit Programs during the Meltdown."

Another set of non-traditional policies consisted of the large scale asset purchase (LSAP) programs. With the federal funds rate near zero, the asset purchases were implemented to help push down longer-term public and private borrowing rates. In November 2008, the Fed announced that it would purchase US agency mortgage-backed securities (MBS) and the debt of housing related US government agencies (Fannie Mae, Freddie Mac, and the Federal Home Loan banks).1  The choice of assets was partly aimed at reducing the cost and increasing the availability of credit for home purchases. These purchases provided support for the housing market, which was the epicenter of the crisis and recession, and also helped improve broader financial conditions. The initial plan had the Fed buying up to $500 billion in agency MBS and up to $100 billion in agency debt; this particular program was expanded in March 2009 and completed in 2010. In March 2009, the FOMC also announced a program to purchase $300 billion of longer-term Treasury securities, which was completed in October 2009, just after the end of the Great Recession as dated by the National Bureau of Economic Research. Together, under these programs and their expansions (commonly called QE1), the Federal Reserve purchased approximately $1.75 trillion of longer-term assets, with the size of the Federal Reserve’s balance sheet increasing by slightly less because some securities on the balance sheet were maturing at the same time.

As of this writing in 2013, however, real GDP is only a little over 4.5 percent above its previous peak and the unemployment rate remains at 7.3 percent. With the federal funds rate at the zero bound and the current recovery slow and grudging, the Fed’s monetary policy strategy has continued to evolve in an attempt to stimulate the economy and fulfill its statutory mandate. Since the end of the Great Recession, the Fed has continued to make changes to its communication policies and to implement additional LSAP programs: a Treasuries-only purchase program of $600 billion in 2010-11 (commonly called QE2) and an outcome-based purchase program that began in September 2012 (in addition, there was a maturity extension program in 2011-12 where the Fed sold shorter-maturity Treasury securities and purchased longer-term Treasuries). Moreover, the increased focus on financial stability and regulatory reform, the economic side effects of the European sovereign debt crisis, and the limited prospects for global growth in 2013 and 2014 speak to how the aftermath of the Great Recession continues to be felt today.

Board of Governors of the Federal Reserve System. “FOMC Statement.” December 16, 2008, http://www.federalreserve.gov/newsevents/press/monetary/20081216b.htm.

Board of Governors of the Federal Reserve System. “FOMC Statement.” March 18, 2009a, http://www.federalreserve.gov/newsevents/press/monetary/20090318a.htm.

Board of Governors of the Federal Reserve System. “FOMC Statement.” November 4, 2009b, http://www.federalreserve.gov/newsevents/press/monetary/20091104a.htm.