Signed by President Barack Obama on July 21, 2010, this legislation provided wide-ranging prescriptions aimed at correcting the causes of the 2007-09 financial crisis. 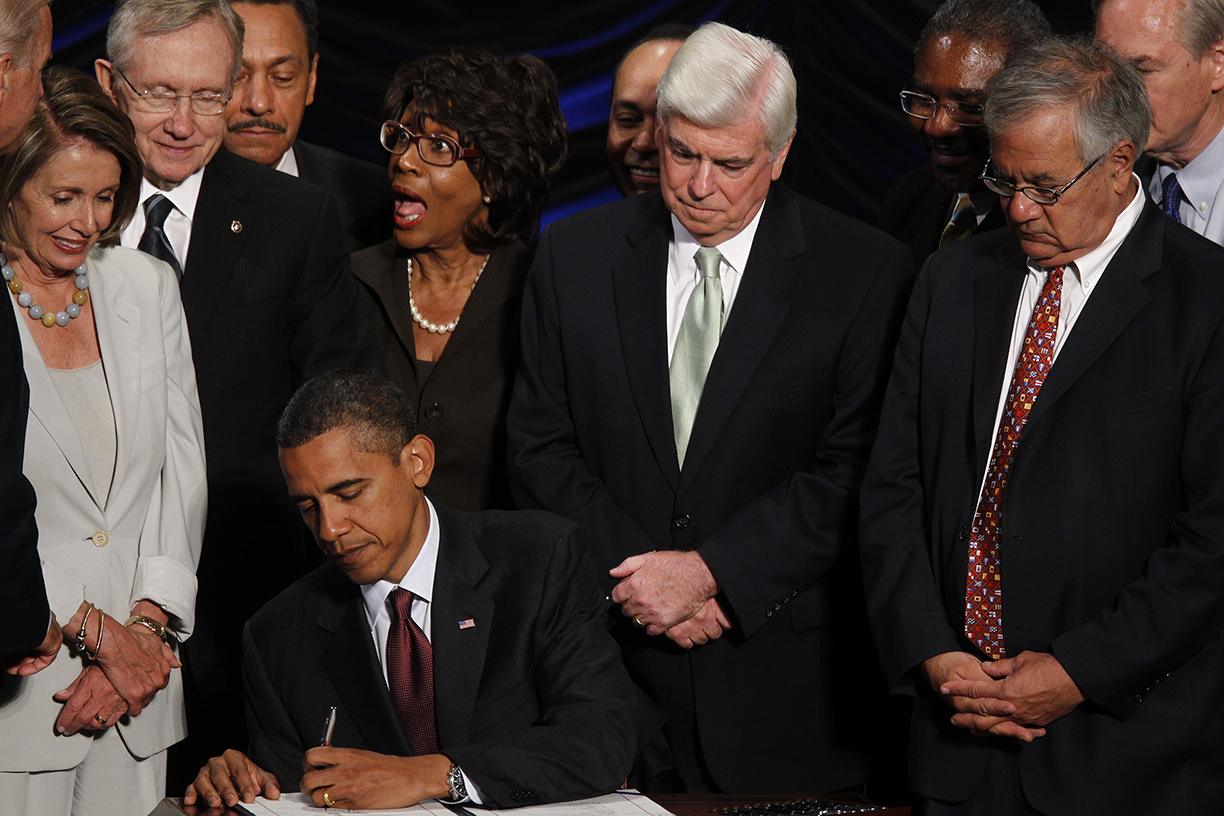 While a number of factors led to such a severe recession, the primary cause was a breakdown in our financial system. It was a crisis born of a failure of responsibility from certain corners of Wall Street to the halls of power in Washington. For years, our financial sector was governed by antiquated and poorly enforced rules that allowed some to game the system and take risks that endangered the entire economy.

Unscrupulous lenders locked consumers into complex loans with hidden costs. Firms like AIG placed massive, risky bets with borrowed money. And while the rules left abuse and excess unchecked, they left taxpayers on the hook if a big bank or financial institution ever failed.

Scholars, practitioners, and casual observers will debate for years to come the precise causes of the 2008 financial crisis. They need not agree with President Obama’s broad description of those causes, however, to understand that it summarizes how legislators perceived those causes in 2009 and 2010, when members of Congress began to craft the Dodd-Frank Act. Through its wide-ranging prescriptions for everything from mortgage lending to shareholder voting to derivatives clearing, and despite the fact that few congressional Republicans supported it, Dodd-Frank reveals where Congress saw flaws in the US financial system.

On the day he signed Dodd-Frank into law, President Obama tried to distill some of those flaws and place them into a few broad categories. First, he described inadequate prudential supervision and regulation, noting how “our financial sector was governed by antiquated and poorly enforced rules that allowed some to game the system and take risks that endangered the entire economy.” Second, he referred to bailouts, those government loans, payments or guaranties that “left taxpayers on the hook if a big bank or financial institution ever failed.” Finally, he cited consumers’ vulnerability to sharp practices, such as when “lenders locked consumers into complex loans with hidden costs.” These broad categories offer a simple but useful way to consider Dodd-Frank and its responses to the crisis.

“Antiquated and poorly enforced rules.” Rulemaking, on-the-ground examination and inspection, and enforcement actions are the ways regulatory agencies make sure financial institutions operate safely and soundly. The financial crisis revealed how these activities, generally referred to as prudential supervision and regulation, sometimes failed to keep up with innovations in the financial marketplace or financial institutions’ reckless behaviors. As evidence, some members of Congress pointed to eroded mortgage lending standards, others to unchecked and opaque securitization, still others to deregulation and the mingling of traditional banking and securities investment. Many cited all of the above and then some. Congress didn’t hesitate to hold the regulatory agencies responsible, either, whether because these watchdogs didn’t appreciate the severity of the problems afflicting the residential housing market, failed to rein in the securities market, or allowed financial institutions to carry too little capital and too much debt.

In response, Dodd-Frank does several things:

"Taxpayers on the hook." When the federal government facilitated the sales of firms like Wachovia and Bear Stearns, lent money to firms like AIG, and bought or insured bank assets through programs like TARP, it was deploying public money to bail out private companies. These efforts helped prevent a cascade of sudden, disorderly corporate collapses, but they also absorbed losses those companies and their creditors would’ve otherwise sustained. By saving companies and creditors from themselves, these efforts, in effect, were bailouts. These bailouts often involved very large, complex, and interconnected financial firms, and as a result the idea of "Too Big To Fail" became part of the public discourse. "Too Big To Fail" is shorthand for the troublesome relationship between the very largest corporations, their creditors, and the federal government. When these corporations become sufficiently large or complex or interconnected with other firms, the marketplace assumes the government, for fear that the corporations’ failures would have catastrophic domino effects, will probably prop them up, and creditors, who understand this, lend to those corporations more cheaply. Congress concluded it had to untangle this knot of large financial institutions, near-systemic financial collapse, privatization of gain, and socialization of loss.

To help failing firms fail without threatening US financial stability and to help keep taxpayers off the hook, Dodd-Frank created new powers and crimped old ones:

"Complex loans with hidden costs." In the years before the crisis, house prices steadily rose and lending standards steadily loosened. Consumers borrowed without demonstrating their ability to repay. Lenders extended complicated, interest-only, adjustable mortgages to borrowers who often didn’t understand them and couldn’t afford them. All the while, securitizers bundled these mortgages into securities, which the secondary market hungrily ate up. These practices may have seemed sustainable when home prices were rising; they proved catastrophic once prices began to decline. Mortgage fraud only made the problem worse. Unable to keep up or refinance, borrowers by the millions defaulted or found themselves stuck with mortgage debts exceeding their houses’ worth. Many in Congress watched the resulting foreclosure crisis and concluded the time had come for a new regulatory agency dedicated solely to consumer protection in the financial marketplace.

In response, Dodd-Frank established a new regulatory agency dedicated to financial consumer protection and prohibited many of the lending practices that proliferated in the years before the crisis:

Dodd-Frank reaches beyond prudential supervision, orderly liquidation, and consumer protection, but these three areas are at its heart. Passage, enactment, and the president’s signature were only the beginning, however. Since President Obama signed Dodd-Frank into law, federal agencies, the Federal Reserve included, have been hard at work translating the statute’s broad directions into specific regulations they can enforce. This difficult but crucial work of writing and enforcing Dodd-Frank Act regulations will be among the Federal Reserve’s most important responsibilities as it embarks on its second century.