Lasting from May 1937 until June 1938, this recession was America’s third-worst downturn of the 20th century. With real GDP dropping 10 percent and unemployment hitting 20 percent, it was less severe than the recessions of 1920 and 1929. 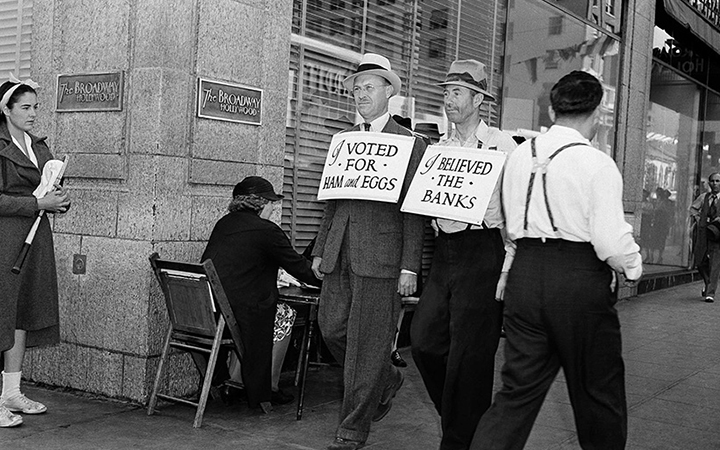 According to the National Bureau of Economic Research, the 1937 contraction, which lasted from May 1937 until June 1938, was America’s third-worst recession of the twentieth century, paling in comparison to the 1920 and 1929 downturns. A few statistics reveal the severity of the 1937 recession: Real GDP fell 10 percent. Unemployment, which had declined considerably after 1933, hit 20 percent. Finally, industrial production fell 32 percent (Bordo and Haubrich 2012).

According to the literature on the subject, the possible causes of that recession were a contraction in the money supply caused by Federal Reserve and Treasury Department policies and contractionary fiscal policies. In 1936, to prevent an “injurious credit expansion,” Fed policymakers doubled reserve requirement ratios to soak up banks’ excess reserves (which is money above the amount banks were required to hold as a fraction of customers’ deposits) (Federal Reserve Bank of St. Louis 1936). Excess reserves averaged about $500 million in 1933. Remarkably, they swelled from $859 million in December 1933 to over $3.3 billion in December 1935 (Roose 1954).

A question arises: Why did banks hold such large quantities of reserves? A 2010 piece published by the Atlanta Fed answers this question (Dwyer 2010). Uncertainty, associated with runs on the banking system from 1929 to 1933 and the ensuing economic problems, probably explains part of the increase in excess reserves. Friedman and Schwartz (1963) share the view that banks increased their preferences for reserves in the wake of the 1929 crash. Low interest rates also contributed to the high level of excess reserves and may well have been a more important reason for the increase of excess reserves. The reason is that when short-term rates are low, it is less costly to hold large amounts of non-interest-earning reserves than to repeatedly incur the fixed cost of adjusting.

The Fed’s contractionary policy was complemented by the Treasury’s decision, in late June 1936, to sterilize gold inflows in order to reduce excess reserves. The sterilization policy severed the link between gold inflows and monetary expansion. By preventing gold inflows from becoming part of the monetary base, this policy abruptly halted what had been a strong monetary expansion. Friedman and Schwartz (1963, 544) maintained that “The combined impact of the rise in reserve requirements and—no less important—the Treasury gold-sterilization program first sharply reduced the rate of increase in the monetary stock and then converted it into a decline.” This brief essay is limited to noting that there is an ongoing debate about which policy played the greater contractionary role.

Fiscal policy hardly helped. The Social Security payroll tax debuted in 1937, on top of the tax increase mandated by the Revenue Act of 1935. The changes in the net effect of government spending have been heavily emphasized as a cause of both the recession and the revival of 1937‒38. For example, in 1939, Marriner Eccles asserted that the “too rapid withdrawal of the government’s stimulus…accompanied by other important factors…[led to the] rapid deflation in the fall of 1937, which continued until the present spending program of the government was begun last summer” (Federal Reserve Bank of St. Louis 1939). The acceptance of this viewpoint among high-ranking officials gives added significance to an investigation of government fiscal policy.

The recession ended after the Fed rolled back reserve requirements, the Treasury stopped sterilizing gold inflows and desterilized all remaining gold that had been sterilized since December 1936, and the Roosevelt administration began pursuing expansionary fiscal policies. The recovery from 1938 to 1942 was spectacular: Output grew by 49 percent, fueled by gold inflows from Europe and a major defense buildup.

Concerning the recovery from the recent financial crisis, the 1937 episode provides a “cautionary tale,” wrote economist Christina Romer, against withdrawing economic support too early: A return to economic decline, or even panic, could follow. Chicago Fed President Charles Evans expressed a similar view in 2012: “There is a natural tendency for policymakers to pull back on accommodation too early before the real rate of interest has fallen to low enough levels. Such errors happened in 1937 when the Fed prematurely withdrew accommodation.” In short, the 1937 recession warns us to proceed with caution.