In August 1935, President Franklin D. Roosevelt enacted significant reforms to the Federal Reserve and the financial system, including increasing the independence of the Fed from the executive branch and shifting some powers formerly held by the Reserve Banks to the Board of Governors. 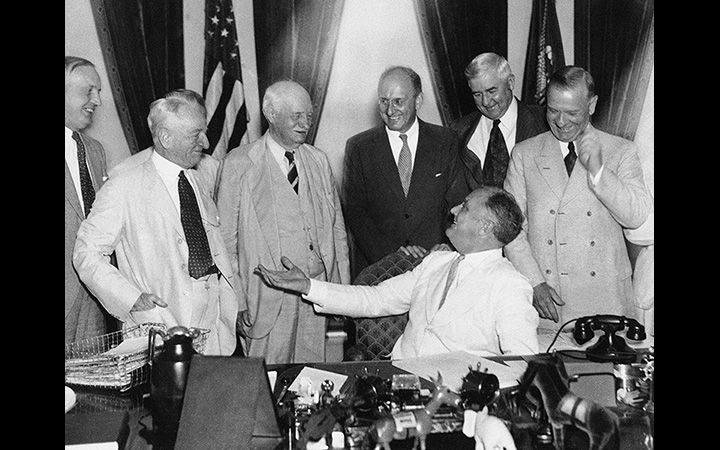 The Banking Act of 1935, which President Roosevelt signed on August 23, completed the restructuring of the Federal Reserve and financial system begun during the Hoover administration and continued during the Roosevelt administration. Much of that earlier legislation contained emergency expedients and regulatory experiments that Congress approved on a temporary basis. The Banking Act of 1935 finalized these reforms “to provide for the sound, effective, and uninterrupted operation of the banking system.” 1

Changing the titles of the Federal Reserve’s leaders had symbolic and legal significance. Around the world, the final decision-maker in a central bank held the title of governor. This tradition probably arose with the Bank of England, which had been led by its governor since 1694. The Federal Reserve Act of 1913 labeled the chief executive officers at reserve banks as governors because the Fed’s founders viewed the system as a confederation of autonomous reserve banks, each operating independently under general oversight of the Federal Reserve Board in Washington, DC. Governors were active executive officers who directed the day-to-day operations of their organization.

The Banking Act of 1935 changed the titles of the System’s leaders to signify the centralization of authority at the Board of Governors and the reduction in the independence and stature of the twelve Federal Reserve District Banks (Friedman and Schwartz 1963, 445-6). These changes required a careful editing of the entire Federal Reserve Act to clearly indicate which powers of the old bank governors transferred to the new board governors and which powers of the old bank CEOs remained with the new bank CEOs.

In this rewriting of the act, the reserve banks lost certain legal powers and much policy independence. Originally, each bank directed open-market operations in its own district. Banks decided what securities to purchase at what price for their own accounts. In the 1920s, the banks realized that each bank’s actions influenced markets in other districts and that uncoordinated simultaneous actions disturbed markets throughout the nation. In 1922, to enhance coordination, the Reserve Banks of New York, Boston, Chicago, Cleveland, and Philadelphia created a committee of governors to plan and execute joint purchases and sales. In 1923, with the concurrence of the Board, that adhoc committee became the formal Open Market Investment Committee (OMIC). The OMIC directed a single account that conducted open-market transactions for the entire system, under the general supervision of the Board, with pro-rata shares of transactions allocated to district banks. This was a voluntary arrangement, with individual banks retaining legal rights to engage in open market operations on their own initiative or to decline to participate in system-wide actions, although deviations from common policy tended to be small and temporary.

In 1930, the Board and the banks altered the arrangement. The five-member OMIC, which had the authority to initiate and execute open market policy, was replaced by the twelve-member Open Market Policy Conference (OMPC), consisting of all twelve bank governors, which planned open market policies in consultation with the Board, and a five-member executive committee (consisting of the members of the old OMIC), which directed the execution of policies. The OMPC remained a voluntary organization of equals. Each bank retained the right to decide whether or not to participate in joint action, the right to act on their own account (except for government securities), and the right to withdraw from the conference.

This arrangement appeared to function effectively for two years. In the fall of 1931, the System coordinated a joint response to the financial crisis in Europe. In the winter and spring of 1932, the System embarked on expansionary open market policies of unprecedented scale. The aggressive policies appeared to be effective. The economy appeared poised to recover. But, in the summer of 1932, disagreements arose, cooperation collapsed, expansion ceased, and contraction resumed. The Depression reached its trough in the winter of 1933, during the nationwide financial crisis in February and March, when several reserve banks refused to cooperate with system-wide open market policies or to rediscount assets of other reserve banks. Congress and the Roosevelt administration responded to this clear failure of cooperation in the Banking Act of 1933 (commonly called Glass-Steagall), which changed the OMPC into the Federal Open Market Committee (FOMC), whose members remained the governors of the twelve regional reserve banks, but whose decisions became binding on the reserve banks.

The Banking Act of 1935 superseded this arrangement by creating the FOMC’s modern structure. The FOMC’s voting members consisted of the seven members of the Board of Governors, the president of the Federal Reserve Bank of New York, and the presidents of four other banks on a rotating basis. The FOMC directed open market operations for the system as a whole implemented through the trading facilities at the Federal Reserve Bank of New York. Within this structure, the district banks participated in the creation of a coordinated, national monetary policy, rather than pursuing independent policies in their own districts.

The final version of Title II arose after a vigorous debate, which lasted throughout the spring and summer, after the Roosevelt administration introduced an initial version of the bill to Congress in February 1935 (Williams 1936, 95).

The initial version of Title II was prepared under the direction of Marriner Eccles, who moved from the Treasury to become governor of the Federal Reserve Board in November 1934 and for the next several months closely supervised the staff who drafted the legislation.4  The February draft contained provisions similar to those described above and additional clauses (New York Times 1935, 20).

The initial version proposed to eliminate collateral requirements for Federal Reserve notes and to allow the Federal Reserve Banks to purchase any security guaranteed by the U.S. government, including Treasury notes, bills, and bonds, without regard for maturity. This proposal would have allowed the Federal Reserve to expand the supply of money and credit rapidly and without limit by purchasing government debt. In the past, the supply of Federal Reserve notes rose and fell depending upon the quantity of short-term business loans extended by commercial banks within bounds determined by the available supply of gold coins and bullion. This dynamic arose from the real bills doctrine underlying the original Federal Reserve Act, where the extension of commercial loans created collateral that backed additional issues of currency.

These provisions of the initial bill “released a flood of protest and criticism, with a modicum of endorsement, which followed it through the hearings in both the House and the Senate” (Bradford 1935, 663).  The House passed the administration’s banking bill with few amendments. When the bill arrived in the Senate, Sen. Carter Glass (D-VA) declared:

“that he had before him a volume of letters that would fill a dozen issues of the Congressional Record from commercial institutions, business institutions, and industrial institutions of every description all protesting against the banking bill as sent over from the House of Representatives” (GFW 1936).

Opposition came from people who feared inflation and worried about the centralization of monetary policy in Washington. Opposition also came from business leaders, bankers, economists, and politicians who doubted the economic theories underlying the controversial provisions of the initial bill and valued ideas embedded in the original Federal Reserve Act, particularly the real bills doctrine, which tied the quantity of currency issued by the central bank to the quantity of short-term business loans extended by commercial banks. “The sections of the original bill which drew the most fire were those which tended to increase political influence in the administration of the system” (Preston 1935, 761).

Title III of the Banking Act of 1935, Technical Amendments to Banking Laws, touched on a wide range of issues. Some altered the investments that banks were allowed to make. Others altered arrangements for voting on bank stock and rules regarding the governance of financial firms. A large literature characterizes the range of changes. Here, we emphasize a particularly important example.

From 1863 until 1935, shareholders of most commercial banks faced double liability. This meant that if banks failed, the stockholders – who typically included the directors and officers of the bank – lost the amount they had invested in the stock of the bank and an additional amount, typically $100, per share. This additional liability gave bank shareholders and managers an incentive to ensure the safe operation of financial institutions, but also deterred investment in commercial banks and impeded the recovery of the financial system following the widespread failures of the early 1930s. To speed the recovery, the Banking Act of 1935 eliminated double liability.

Together, the creation of the FDIC and the elimination of double liability changed the relationship between the federal government, Federal Reserve, and financial industry. Before these changes, bank failures led to harsh consequences for banks’ owners and managers. Fear of these consequences kept risk-taking in check. After 1935, when things went wrong, bankers faced less liability and the FDIC cleaned up the mess. This change aroused little opposition at the time, although academics note its long-run consequences (Mitchener and Richardson 2013).

Eventually, a conference committee composed of senators and representatives met to reconcile differences in different versions of the legislation. The final version closely resembled the Senate’s versions, which was broadly acceptable to bankers and businessmen. When Congress presented the Banking Act of 1935 to the president, the “American Bankers Association endorsed the act as an acceptable piece of legislation and basically sound” (G.F.W. 1936).