On Black Monday, October 28, 1929, the Dow Jones Industrial Average declined nearly 13 percent. Federal Reserve leaders differed on how to respond to the event and support the financial system. 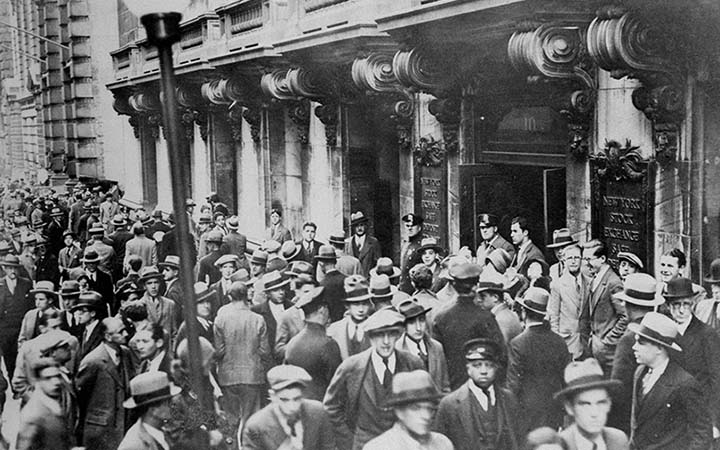 The epic boom ended in a cataclysmic bust. On Black Monday, October 28, 1929, the Dow declined nearly 13 percent. On the following day, Black Tuesday, the market dropped nearly 12 percent. By mid-November, the Dow had lost almost half of its value. The slide continued through the summer of 1932, when the Dow closed at 41.22, its lowest value of the twentieth century, 89 percent below its peak. The Dow did not return to its pre-crash heights until November 1954.

The financial boom occurred during an era of optimism. Families prospered. Automobiles, telephones, and other new technologies proliferated. Ordinary men and women invested growing sums in stocks and bonds. A new industry of brokerage houses, investment trusts, and margin accounts enabled ordinary people to purchase corporate equities with borrowed funds. Purchasers put down a fraction of the price, typically 10 percent, and borrowed the rest. The stocks that they bought served as collateral for the loan. Borrowed money poured into equity markets, and stock prices soared.

The Board’s opinion stemmed from the text of the act. Section 13 authorized reserve banks to accept as collateral for discount loans assets that financed agricultural, commercial, and industrial activity but prohibited them from accepting as collateral “notes, drafts, or bills covering merely investments or issued or drawn for the purpose of carrying or trading in stocks, bonds or other investment securities, except bonds and notes of the Government of the United States” (Federal Reserve Act 1913).

Section 14 of the act extended those powers and prohibitions to purchases in the open market.3

These provisions reflected the theory of real bills, which had many adherents among the authors of the Federal Reserve Act in 1913 and leaders of the Federal Reserve System in 1929. This theory indicated that the central bank should issue money when production and commerce expanded, and contract the supply of currency and credit when economic activity contracted.

The Federal Reserve decided to act. The question was how. The Federal Reserve Board and the leaders of the reserve banks debated this question. To rein in the tide of call loans, which fueled the financial euphoria, the Board favored a policy of direct action. The Board asked reserve banks to deny requests for credit from member banks that loaned funds to stock speculators.4  The Board also warned the public of the dangers of speculation.

The governor of the Federal Reserve Bank of New York, George Harrison, favored a different approach. He wanted to raise the discount lending rate. This action would directly increase the rate that banks paid to borrow funds from the Federal Reserve and indirectly raise rates paid by all borrowers, including firms and consumers. In 1929, New York repeatedly requested to raise its discount rate; the Board denied several of the requests. In August the Board finally acquiesced to New York’s plan of action, and New York’s discount rate reached 6 percent.5

The Federal Reserve’s rate increase had unintended consequences. Because of the international gold standard, the Fed’s actions forced foreign central banks to raise their own interest rates. Tight-money policies tipped economies around the world into recession. International commerce contracted, and the international economy slowed (Eichengreen 1992; Friedman and Schwartz 1963; Temin 1993).

The financial boom, however, continued. The Federal Reserve watched anxiously. Commercial banks continued to loan money to speculators, and other lenders invested increasing sums in loans to brokers. In September 1929, stock prices gyrated, with sudden declines and rapid recoveries. Some financial leaders continued to encourage investors to purchase equities, including Charles E. Mitchell, the president of the National City Bank (now Citibank) and a director of the Federal Reserve Bank of New York.6  In October, Mitchell and a coalition of bankers attempted to restore confidence by publicly purchasing blocks of shares at high prices. The effort failed. Investors began selling madly. Share prices plummeted.

To relieve the strain, the New York Fed sprang into action. It purchased government securities on the open market, expedited lending through its discount window, and lowered the discount rate. It assured commercial banks that it would supply the reserves they needed. These actions increased total reserves in the banking system, relaxed the reserve constraint faced by banks in New York City, and enabled financial institutions to remain open for business and satisfy their customers’ demands during the crisis. The actions also kept short term interest rates from rising to disruptive levels, which frequently occurred during financial crises.

At the time, the New York Fed’s actions were controversial. The Board and several reserve banks complained that New York exceeded its authority. In hindsight, however, these actions helped to contain the crisis in the short run. The stock market collapsed, but commercial banks near the center of the storm remained in operation (Friedman and Schwartz 1963).

While New York’s actions protected commercial banks, the stock-market crash still harmed commerce and manufacturing. The crash frightened investors and consumers. Men and women lost their life savings, feared for their jobs, and worried whether they could pay their bills. Fear and uncertainty reduced purchases of big ticket items, like automobiles, that people bought with credit. Firms – like Ford Motors – saw demand decline, so they slowed production and furloughed workers. Unemployment rose, and the contraction that had begun in the summer of 1929 deepened (Romer 1990; Calomiris 1993).7

While the crash of 1929 curtailed economic activity, its impact faded within a few months, and by the fall of 1930 economic recovery appeared imminent. Then, problems in another portion of the financial system turned what may have been a short, sharp recession into our nation’s longest, deepest depression.

From the stock market crash of 1929, economists – including the leaders of the Federal Reserve – learned at least two lessons.8

First, central banks – like the Federal Reserve – should be careful when acting in response to equity markets. Detecting and deflating financial bubbles is difficult. Using monetary policy to restrain investors’ exuberance may have broad, unintended, and undesirable consequences.9

Second, when stock market crashes occur, their damage can be contained by following the playbook developed by the Federal Reserve Bank of New York in the fall of 1929.

Economists and historians debated these issues during the decades following the Great Depression. Consensus coalesced around the time of the publication of Milton Friedman and Anna Schwartz’s A Monetary History of the United States in 1963. Their conclusions concerning these events are cited by many economists, including members of the Federal Reserve Board of Governors such as Ben Bernanke, Donald Kohn and Frederic Mishkin.

In reaction to the financial crisis of 2008 scholars may be rethinking these conclusions. Economists have been questioning whether central banks can and should prevent asset market bubbles and how concerns about financial stability should influence monetary policy. These widespread discussions hearken back to the debates on this issue among the leaders of the Federal Reserve during the 1920s.

Greenspan, Alan, “The Challenge of Central Banking in a Democratic Society,” Remarks at the Annual Dinner and Francis Boyer Lecture of The American Enterprise Institute for Public Policy Research, Washington, DC, December 5, 1996.