The Roosevelt administration's policies in 1933-34 regarding gold and dollars were both controversial and consequential. 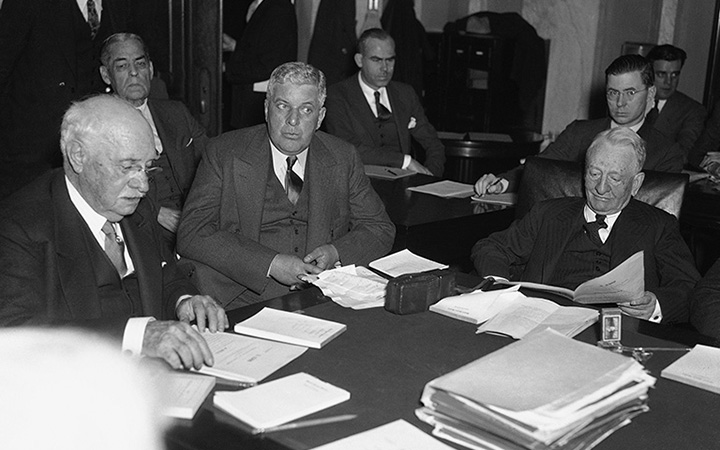 The Roosevelt administration’s policies regarding gold and dollars were controversial and consequential.

During the financial crisis of 1933 that culminated in the banking holiday in March 1933, large quantities of gold flowed out from the Federal Reserve. Some of this outflow went to individuals and firms in the United States. This domestic drain occurred because individuals and firms preferred holding metallic gold to bank deposits or paper currency. Some of the gold flowed to foreign nations. This external drain occurred because foreign investors feared a devaluation of the dollar. Together, the internal and external drains consumed the Federal Reserve’s free gold. In March 1933, when the Federal Reserve Bank of New York could no longer honor its commitment to convert currency to gold, President Franklin Roosevelt declared a national banking holiday.

The Roosevelt administration’s policies regarding gold responded to this crisis. The policies unfolded through three phases.

During the first phase, in the spring and summer of 1933, the Roosevelt administration suspended the gold standard.

In March 1933, the Emergency Banking Act gave the president the power to control international and domestic gold movements. It also gave the secretary of the treasury the power to compel surrender of gold coins and certificates. The administration waited before employing these powers, in hope that the situation would correct itself, but gold outflows continued.

On April 20, President Roosevelt issued a proclamation that formally suspended the gold standard. The proclamation prohibited exports of gold and prohibited the Treasury and financial institutions from converting currency and deposits into gold coins and ingots. The actions halted gold outflows.

In May 1933, the administration once again weakened links to gold. The Thomas amendment to the Agricultural Relief Act gave to the president the power to reduce the gold content of the dollar by as much as 50 percent. The president also received the power to back the dollar with silver, rather than gold, or with both silver and gold, at silver prices determined by the administration.

On June 5, a congressional resolution abrogated gold clauses in all contracts, both government and private. Gold clauses guaranteed that contracts would be repaid in gold or in gold’s monetary equivalent, at the value set in 1900. A series of cases in the United States Supreme Court upheld the constitutionality of these actions.1

Together, these measures weakened the dollar’s link to gold. The dollar nominally retained its value, but the Department of the Treasury would not exchange dollars for gold and forbade the Federal Reserve from doing so. The administration could, at any time, change the dollar’s value or begin backing the dollar with silver. In the future, the government might (or might not) allow the conversion of paper dollars into gold (or silver or both) at some price that the government would announce at some point in the future. To ordinary men and women, in other words, the dollar’s value in terms of gold (and other goods) was uncertain.

The second phase of the Roosevelt administration’s gold policy began in October 1933 with the inauguration of the gold purchase plan.

This phase involved the deliberate devaluation of the dollar. The government did this by authorizing the Reconstruction Finance Corporation to buy gold at increasing prices. These purchases raised gold’s value in terms of dollars, conversely lowering the dollar’s value in terms of gold and in terms of foreign currencies, whose value in gold remained pegged at old prices.

The goal of these programs was to raise American prices of commodities like wheat and cotton, returning them to the level of 1926, before the beginning of the contraction. This reflation would counteract the deflation that had dragged the economy into the abyss. The reflation would relieve debtors, resuscitate banks, and revive businesses. The reflation would lower prices of American goods abroad, encouraging exports, and raise prices of foreign goods in the US, discouraging imports.

The third phase began in January 1934, with the Gold Reserve Act and a return to stability. The new stability solidified the emergency measures enacted in 1933, resurrected the gold standard, and re-established financial links between America and the rest of the world.

At the time, the Roosevelt administration’s gold policies were controversial. Critics asserted that they were “completely immoral” and “a flagrant violation of the solemn promises made in the Gold Standard Act of 1900” and promises made to purchasers of Liberty and Victory Loans during World War I (Angell 1934, 492). Critics claimed these policies set the stage for an inflation of supply of credit and currency, which would trigger a speculative boom bigger than ever before and eventually end in a disastrous depression (Bullock 1934, 44). Critics claimed that these policies delayed economic recovery by frightening and confusing consumers and businessmen.

Economic historians have come to a different conclusion. Scholars believe Roosevelt’s reflation accelerated America’s recovery from the Great Depression. These scholars include Milton Friedman and Anna Schwartz (1963), who vigorously criticized Federal Reserve policies during the 1960s and 1970s, and Allan Meltzer (2003), a famous historian and prominent critic of Federal Reserve policies following the financial crisis of 2008. These scholars also include academics who work or have worked as policymakers in recent years such as Ben Bernanke (2013) and Christina Romer (1992). On this issue, seminal statistical analysis appears in an essay by Ehsan Choudhri and Levis Kochin (1980). Perhaps the most persuasive research belongs to Barry Eichengreen and Jeffrey Sachs (1985). Their essay demonstrated that economic recovery in the United States and in most of the world’s leading industrial nations began at the time they suspended the gold standard and reflated their economies.

The opinions of the leaders of the Federal Reserve System have changed dramatically on this issue, as Ben Bernanke makes clear in his recent speeches and writings on this topic (2013).

Choudhri, Ehsan U and Levis A. Kochin. "The Exchange Rate and the International Transmission of Business Cycle Disturbances: Some Evidence from the Great Depression," Journal of Money, Credit and Banking 12, no. 4, part 1 (November 1980): 565-74.

Fisher, Irving. “Reflation and Stabilization.” Annals of the American Academy of Political and Social Science 171 (January 1934).