The U.S. appeared to be poised for economic recovery following the stock market crash of 1929, until a series of bank panics in the fall of 1930 turned the recovery into the beginning of the Great Depression. 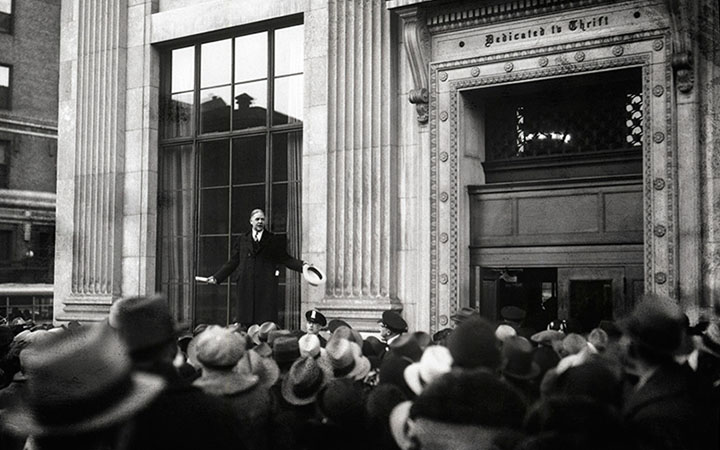 John Poole, president of the Federal American National Bank in Washington, D.C., stands on a narrow ledge outside the building and declares to the crowd that the institution was sound, February 5, 1931.

In the fall of 1930, the economy appeared poised for recovery. The previous three contractions, in 1920, 1923, and 1926, had lasted an average of fifteen months.1 The downturn that began in the summer of 1929 had lasted for fifteen months. A rapid and robust recovery was anticipated. In November 1930, however, a series of crises among commercial banks turned what had been a typical recession into the beginning of the Great Depression.

One cause was the practice of counting checks in the process of collection as part of banks’ cash reserves. These ‘floating’ checks were counted in the reserves of two banks, the one in which the check was deposited and the one on which the check was drawn.2  In reality, however, the cash resided in only one bank. Bankers at the time referred to the reserves composed of float as fictitious reserves. The quantity of fictitious reserves rose throughout the 1920s and peaked just before the financial crisis in 1930. This meant that the banking system as a whole had fewer cash (or real) reserves available in emergencies (Richardson 2007).

Another problem was the inability to mobilize bank reserves in times of crisis. Nonmember banks kept a portion of their reserves as cash in their vaults and the bulk of their reserves as deposits in correspondent banks in designated cities. Many, but not all, of the ultimate correspondents belonged to the Federal Reserve System. This reserve pyramid limited country banks’ access to reserves during times of crisis.3  When a bank needed cash, because its customers were panicking and withdrawing funds en masse, the bank had to turn to its correspondent, which might be faced with requests from many banks simultaneously or might be beset by depositor runs itself. The correspondent bank also might not have the funds on hand because its reserves consisted of checks in the mail, rather than cash in its vault. If so, the correspondent would, in turn, have to request reserves from another correspondent bank. That bank, in turn, might not have reserves available or might not respond to the request.4

These problems turned the collapse of Caldwell and Company into a painful financial event. Caldwell was a rapidly expanding conglomerate and the largest financial holding company in the South. It provided its clients with an array of services – banking, brokerage, insurance – through an expanding chain controlled by its parent corporation headquartered in Nashville, Tennessee. The parent got into trouble when its leaders invested too heavily in securities markets and lost substantial sums when stock prices declined. In order to cover their own losses, the leaders drained cash from the corporations that they controlled.

On November 7, one of Caldwell’s principal subsidiaries, the Bank of Tennessee (Nashville) closed its doors. On November 12 and 17, Caldwell affiliates in Knoxville, Tennessee, and Louisville, Kentucky, also failed. The failures of these institutions triggered a correspondent cascade that forced scores of commercial banks to suspend operations. In communities where these banks closed, depositors panicked and withdrew funds en masse from other banks. Panic spread from town to town. Within a few weeks, hundreds of banks suspended operations. About one-third of these organizations reopened within a few months, but the majority were liquidated (Richardson 2007).

Panic began to subside in early December. But on December 11, the fourth-largest bank in New York City, Bank of United States, ceased operations. The bank had been negotiating to merge with another institution. The New York Fed had helped with the search for a merger partner. When negotiations broke down, depositors rushed to withdraw funds, and New York’s superintendent of banking closed the institution. This event, like the collapse of Caldwell, generated newspaper headlines throughout the United States, stoking fears of financial panics and currency shortages like the panic of 1907 and inducing jittery depositors to withdraw funds from other banks.

The Federal Reserve’s reaction to this crisis varied across districts. The crisis began in the Sixth District, headquartered in Atlanta. The leaders of the Federal Reserve Bank of Atlanta believed that their responsibility as a lender of last resort extended to the broader banking system. The Atlanta Fed expedited discount lending to member banks, encouraged member banks to extend loans to their nonmember respondents, and rushed funds to cities and towns beset by banking panics.5

The crisis also hit the Eighth District, headquartered in St. Louis. The leaders of the Federal Reserve Bank of St. Louis had a narrower view of their responsibilities and refused to rediscount loans for the purpose of accommodating nonmember banks. During the crisis, the St. Louis Fed limited discount lending and refused to assist nonmember institutions.

Outcomes differed between the districts. After the crisis, in the Sixth District, the economic contraction slowed and recovery began. In the Eighth District, hundreds of banks failed. Lending declined. Business faltered and unemployment rose (Richardson and Troost 2009; Jalil 2014; Ziebarth 2013).

The banking crisis that began with the collapse of Caldwell subsided in early 1931. A new crisis erupted in June 1931, this time in the city of Chicago. Once again, depositor runs beset networks of nonmember banks, some of which had invested in assets that had declined in value. In Chicago, the problem particularly involved real estate.

These regional banking crises harmed the national economy in several ways. The crises disrupted the process of credit creation, increasing the prices that firms paid for working capital and preventing some firms from acquiring credit at any price (Bernanke 1983). This process was particularly pronounced in regions, like the Eighth Federal Reserve District, where large numbers of banks failed, and the information that those banks possessed about who in their community was a good and a bad credit risk disappeared.

The crises also generated deflation because they convinced bankers to accumulate reserves and the public to hoard cash (Friedman and Schwartz 1964). Hoarding reduced the proportion of the monetary base deposited in banks. Accumulating reserves reduced the proportion of deposits that banks loaned out. Together, hoarding and accumulating reduced the supply of money, particularly the amount of money in checking accounts, which at the time were the principal means of payment for goods and services. As the stock of money declined, the prices of goods necessarily followed.

Deflation harmed the economy in many ways. Deflation forced banks, firms, and debtors into bankruptcy; distorted economic decision-making; reduced consumption; and increased unemployment. The gold standard transmitted deflation to other industrial nations, which contributed to financial crises in those countries, and reflected back onto the United States, exacerbating a deflationary feedback loop.

The deflation ended with the Bank Holiday of 1933 and the Roosevelt administration’s recovery programs. These programs included the suspension of the gold standard and the reflation of prices, discussed in essays on Roosevelt’s Gold Program and the Gold Reserve Act of 1934, as well as the reform of financial regulation, creation of deposit insurance, and recapitalization of commercial banks, discussed in essays on the Emergency Banking Act, Banking Act of 1933, and Banking Act of 1935.

Bernanke, Ben. “Nonmonetary Effects of the Financial Crisis in the Propagation of the Great Depression.” American Economic Review 73, no. 3 (June 1983): 257-276.

Richardson, Gary. “Categories and Causes of Bank Distress during the Great Depression, 1929—1933: The Illiquidity versus Insolvency Debate Revisited.” Explorations in Economic History 44, no. 4 (October 2007): 586-607.

Ziebarth, Nicolas L. “Identifying the Effects of Bank Failures from a Natural Experiment in Mississippi during the Great Depression.” American Economic Journal: Macroeconomics 5, no. 1 (2013): 81-101.