Signed by President Ronald Reagan in October 1982, the Act aimed to ease pressures on depository institutions as the Fed raised interest rates to curb the high inflation of the 1970s. 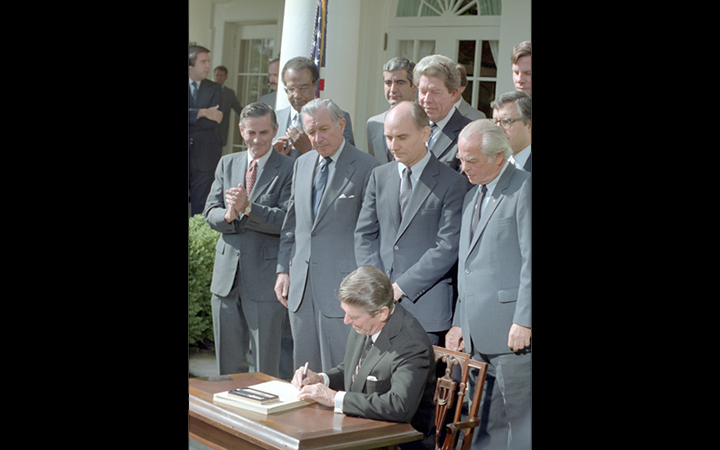 During the 1970s, the US economy was plagued by high inflation. At the time banks and thrift institutions were restricted from raising their deposit interest rates. Fed Regulation Q prohibited banks from paying interest on demand deposits while additional restrictions constrained rates paid on other deposits. These institutions experienced disintermediation as households shifted their deposits to unconstrained money market mutual funds, which offered more attractive rates. Corporations increasingly adopted deposit alternatives, such as repurchase agreements. In October 1979, Federal Reserve Chairman Paul Volcker moved to contain inflation, and, in doing so, raised market interest rates even further. Depository institutions then became illiquid when they were unable to obtain enough deposits to fund their loans.

Regulators had begun slowly removing rate caps in the mid-1970s. But then banks, and especially unhedged thrifts, incurred losses when the value of their long-term, fixed-rate mortgages fell. These institutions had to pay more for their deposits than they were earning on their mortgage loans, many of which had been made in earlier years at low interest rates. Thrift failures became increasingly common, and the savings and loan (S&L) industry and its insurer, the Federal Savings and Loan Insurance Corporation, faced insolvency.

The Garn-St Germain Act aimed to ease the pressures on banks, thrifts, and their insurance funds. The act expanded previous deregulation of deposit rates by creating a new money market deposit account (MMDA) for households that proved to be very popular. It also created a Super NOW account for businesses and government agencies. It removed some Depression-era constraints on thrift asset holdings to facilitate higher earnings. Thrifts were newly allowed to make nonresidential and variable-rate mortgages and to change their charters more readily (Allardice et al. 1983). Title II of the act preempted state laws that thwarted due-on-sale provisions in mortgage contracts that forced property sellers to repay their loans. In the absence of due-on-sale provisions, sellers could pass their low-rate mortgages to buyers, thus preventing the lender from earning a higher market rate on its repaid funds. While these changes were intended to raise thrift earnings, they often backfired when inexperienced lenders made mistakes, and weak thrifts used the new powers to gamble unsuccessfully for recovery (Kane 1989). Many lenders, for example, made high-risk loans in commercial real estate projects.

Although they were less troubled than thrifts, banks and their holding companies were also experiencing disintermediation and decreasing profitability. The act, therefore, took small steps to assist them. Banks could offer the new MMDA and Super NOW accounts. The interest rate differential that allowed thrifts to offer depositors a one-quarter percent higher rate was abolished. Limits on national banks’ loans to one borrower, on real estate lending, and on insider loans were relaxed. Unfortunately, many of those banks that were heavily exposed to the real estate markets failed during the financial crisis that began in 2007. Although restrictions on banks’ insurance activities were increased, restraints were relaxed on relations with their subsidiary banks and on bank service corporation activities that the Fed found to be “closely related to banking.” Holding companies could henceforth offer discount brokerage services, but the traditional separation of banking and commerce was maintained.

As depositors used the new accounts to shift funds from money to near money (highly liquid assets that can be turned into cash), the Fed experienced increasing difficulties in conducting monetary policy. At the time, the Fed guided the economy by controlling the supply of money. Deposit shifts made the velocity of money difficult to predict, and the Fed subsequently changed its operating procedures to avoid this problem.

During this period, the Federal Deposit Insurance Corporation (FDIC) and the state deposit insurance agencies found it increasingly difficult to identify acquirers for the growing numbers of failed institutions. The act, therefore, provided the insurers with emergency powers to breach the 1927 McFadden Act, which had given states the authority to regulate bank branching, and other barriers to interstate banking by allowing cross-industry and cross-state acquisitions. This was an early step toward interstate banking, which culminated in the Riegle-Neal Interstate Banking and Branching Efficiency Act of 1994. The Garn-St Germain Act also mandated several studies that later successfully resulted in risk-based deposit insurance premiums and the combination of the bank and thrift insurance funds.

Some features of the act later proved to be problematic. It gave the deposit insurers emergency powers to aid troubled institutions that were closed, insolvent, defaulting, and/or experiencing severe financial conditions that threatened the stability of the financial system. Insurers could also assist troubled institutions to reduce their exposure to loss. They could issue guarantees; purchase or assume the insured institution’s assets or liabilities (but to preclude nationalization, not its common stock); make loans, contributions and deposits in a troubled institution or its acquirer; organize charter conversions; arrange extraordinary mergers or acquisitions; and/or issue net worth certificates to banks and thrifts with substantial residential real estate loans. Such actions enabled supervisors to delay closing failed firms, which allowed recipients to gamble for recovery. Often they were unsuccessful and increased their and their insurer’s losses. In reaction, the prompt corrective-action provisions of the FDIC Improvement Act of 1991 (FDICIA) required the FDIC to use the least costly form of resolution and mandated supervisors to close an institution before it became book-value insolvent. During the recent financial crisis, the pendulum swung again when the US Treasury used the Troubled Asset Relief Program to inject capital into troubled firms, and the Fed and the FDIC provided unprecedented financial assistance to financial institutions.

Title VIII of the Garn-St Germain Act allowed lenders to make alternative mortgages, some of which proved to be problematic during the recent financial crisis. Some unrestrained lenders, for example, offered infamous 2/28 adjustable-rate mortgages to entice subprime borrowers to initiate loans at low rates, only to find that they could not afford the payments when the mortgage quickly reset at a much higher rate. Millions of foreclosures ensued.

There are two important lessons from this experience. First, rising interest rates impose losses on unhedged depository institutions that hold long-term, fixed-rate loans made at low rates. Second, hiding, instead of resolving, the industry’s problems can increase the severity of those problems and augment the losses that ultimately fall to investors or taxpayers or both.

Kane, Edward J. The S&L Insurance Mess: How Did It Happen? Washington, DC: The Urban Institute, 1989.