In the 1980s, the financial sector suffered through a period of distress that was focused on the nation's savings and loan industry. 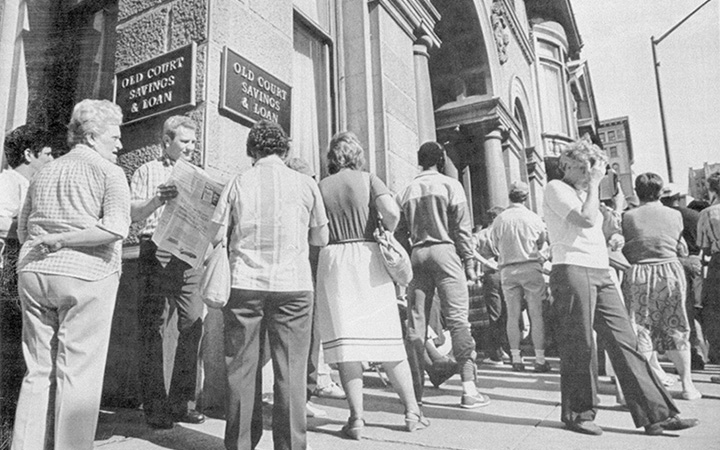 May 13, 1985: Depositors line up to withdraw money from a Baltimore bank following the court order that limited depositors' cash withdrawals until a purchaser was found for the troubled savings and loan. (Photo: Bettmann/Bettmann/Getty Images)
by Kenneth J. Robinson, Federal Reserve Bank of Dallas

In the 1980s, the financial sector suffered through a period of distress that was focused on the nation’s savings and loan (S&L) industry. Inflation rates and interest rates both rose dramatically in the late 1970s and early 1980s. This produced two problems for S&Ls. First, the interest rates that they could pay on deposits were set by the federal government and were substantially below what could be earned elsewhere, leading savers to withdraw their funds. Second, S&Ls primarily made long-term fixed-rate mortgages. When interest rates rose, these mortgages lost a considerable amount of value, which essentially wiped out the S&L industry’s net worth. Policymakers responded by passing the Depository Institutions Deregulation and Monetary Control Act of 1980. But federal regulators lacked sufficient resources to deal with losses that S&Ls were suffering. So instead they took steps to deregulate the industry in the hope that it could grow out of its problems. The industry’s problems, though, grew even more severe. Ultimately, taxpayers were called upon to provide a bailout, and Congress was forced to act with significant reform legislation as the 1980s came to a close.

S&Ls have their origins in the social goal of pursuing homeownership. The first S&L was established in Pennsylvania in 1831. These institutions were originally organized by groups of people who wished to buy their own homes but lacked sufficient savings to purchase them. In the early 1800s, banks did not lend money for residential mortgages. The members of the group would pool their savings and lend them back to a few of the members to finance their home purchases. As the loans were repaid, funds could then be lent to other members.

S&Ls, sometimes called thrifts, are generally smaller than banks, both in number and in the assets under their control. But they were nevertheless important conduits for the U.S. mortgage market. In 1980, there were almost 4,000 thrifts with total assets of $600 billion, of which about $480 billion were in mortgage loans (FDIC). That represented half of the approximately $960 billion in home mortgages outstanding at that time (Board of Governors 2013).

The relatively greater concentration of S&L lending in mortgages, coupled with a reliance on deposits with short maturities for their funding, made savings institutions especially vulnerable to increases in interest rates. As inflation accelerated and interest rates began to rise rapidly in the late 1970s, many S&Ls began to suffer extensive losses. The rates they had to pay to attract deposits rose sharply, but the amount they earned on long-term fixed-rate mortgages didn’t change. Losses began to mount.

As inflation and interest rates began to decline in the early 1980s, S&Ls began to recover somewhat, but the basic problem was that regulators did not have the resources to resolve institutions that had become insolvent. For instance, in 1983 it was estimated that it would cost roughly $25 billion to pay off the insured depositors of failed institutions. But the thrifts’ insurance fund, known as the FSLIC, had reserves of only $6 billion.

As a result, the regulatory response was one of forbearance – many insolvent thrifts were allowed to remain open, and their financial problems only worsened over time. They came to be known as “zombies.” Moreover, capital standards were reduced both by legislation and by decisions taken by regulators. Federally chartered S&Ls were granted the authority to make new (and ultimately riskier) loans other than residential mortgages. A number of states also enacted similar or even more expansive rules for state-chartered thrifts. The limit on deposit insurance coverage was raised from $40,000 to $100,000, making it easier for even troubled or insolvent institutions to attract deposits to lend with.

As a result of these regulatory and legislative changes, the S&L industry experienced rapid growth. From 1982 to 1985, thrift industry assets grew 56 percent, more than twice the 24 percent rate observed at banks. This growth was fueled by an influx of deposits as zombie thrifts began paying higher and higher rates to attract funds. These zombies were engaging in a “go for broke” strategy of investing in riskier and riskier projects, hoping they would pay off in higher returns. If these returns didn’t materialize, then it was taxpayers who would ultimately foot the bill, since the zombies were already insolvent and the FSLIC’s resources were insufficient to cover losses.

Texas was the epicenter of the thrift industry meltdown. In 1988, the peak year for FSLIC-insured institutions’ failures, more than 40 percent of thrift failures (including assisted transactions) nationwide had occurred in Texas, although they soon spread to other parts of the nation. Emblematic of the excesses that took place, in 1987 the FSLIC decided it was cheaper to actually burn some unfinished condos that a bankrupt Texas S&L had financed rather than try to sell them (see Image 2).

By the late 1980s, Congress decided to address the thrift industry’s problems. In 1989 it passed the Financial Institutions Reform, Recovery and Enforcement Act of 1989 that instituted a number of reforms of the industry. The main S&L regulator (the Federal Home Loan Bank Board) was abolished, as was the bankrupt FSLIC. In their place, Congress created the Office of Thrift Supervision and placed thrifts’ insurance under the FDIC. In addition, the Resolution Trust Corporation (RTC) was established and funded to resolve the remaining troubled S&Ls. The RTC closed 747 S&Ls with assets of over $407 billion. The thrift crisis came to its end when the RTC was eventually closed on December 31, 1995. The ultimate cost to taxpayers was estimated to be as high as $124 billion. Unfortunately, the commercial banking industry also suffered its own set of problems over this period, both in Texas and elsewhere. This banking crisis also resulted in major reform legislation that paved the way for a period of stability and profitability…until 2008.

Curry, Timothy, and Lynn Shibut. “The Cost of the Savings and Loan Crisis: Truth and Consequences.” FDIC Banking Review 13, no. 2 (2000).

National Commission on Financial Institution Reform, Recovery, and Enforcement. Origins and Causes of the S&L Debacle: A Blueprint for Reform: A Report to the President and Congress of the United States. Washington, DC: The Commission, 1993.