In October 1979, Fed Chairman Paul Volcker announced new measures by the Federal Open Market Committee aimed at reining in the inflation that had afflicted the US economy for several years. 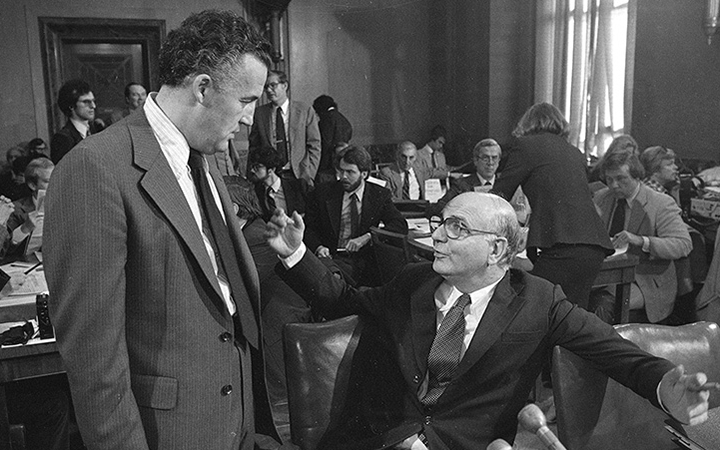 In 1979, President Jimmy Carter nominated Federal Reserve Chairman G. William Miller as treasury secretary as part of a larger cabinet shakeup. Miller, a former business executive who had served a little more than a year at the Fed, oversaw a period of slow growth and high inflation—more popularly known as “stagflation.” In a move that signaled the growing discontent with inflation, Carter nominated New York Fed President Paul Volcker to take Miller’s place as Federal Reserve System chairman.

Since the late 1960s, the nation had experienced a trend of rising prices as inflation began creeping upward from annual rates that were previously less than 2 percent for several years. In 1973, the Federal Reserve tightened policy to address an increase in inflation rates. However, in the face of higher unemployment, the Fed eased its policy before inflation had been fully contained. The year-over-year inflation rate bottomed out at 5 percent in December 1976 before moving higher once again.

By January 1979, inflation was threatening to rise further, as prices jumped 7.7 percent from the year before, according to the personal consumption expenditure index. At the same time, there was concern about the US dollar, which had lost 12 percent of its value against major foreign currencies since late 1976.

During Volcker’s confirmation hearing in July 1979 before the Senate Banking Committee, the soon-to-be Fed chairman made his intentions clear. By then, inflation was running at an annual pace of about 9 percent. Volcker pledged to make fighting inflation his top priority, telling lawmakers the Fed would “have to call the shots as we see them.” In response to questions about his views on the money supply, Volcker responded the supply had been “rising at a pretty good clip,” and there was no evidence the nation was “suffering grievously from a shortage of money” (Dow Jones News Service July 30, 1979).

A few weeks later in a breakfast meeting with reporters, Volcker, who had just started his tenure as chairman, reinforced this message, saying he would be focused on restraining the growth of the money supply, with the ultimate goal of promoting sustainable growth for the US economy.

Throughout the late summer and early fall of 1979, the Federal Reserve under Volcker had begun pushing the federal funds rate slightly higher. At the same time, unemployment began rising to about 6 percent, a move that began making officials in the Carter administration nervous, according to media accounts at the time. An unnamed Treasury official told the Wall Street Journal in September that the Fed would be forced to cut interest rates once unemployment hit 7 percent, “because the unemployment rate will be too high and Congress isn’t willing to bear that burden.”

However, some members of the Federal Open Market Committee remained concerned about the level of inflation, and Volcker made a dramatic move to attack the problem. During a rare press conference on the evening of October 6, 1979, the Saturday before Columbus Day, Volcker announced the results of an unscheduled FOMC meeting held earlier that day.

In front of reporters who had rushed to the Eccles Building to cover the unexpected announcement, Volcker explained the FOMC would shift its focus to managing the volume of bank reserves in the system instead of trying to manage the day-to-day level of the federal funds rate (Lindsey et al. 2005). It was an approach that would lead to more fluctuation in rates and, Volcker hoped, rein in inflation.

Previously, the Fed had conducted policy by targeting growth rates for the money supply and by keeping the federal funds rate within a narrow range that was believed to be consistent with the monetary growth objectives. This was the result of a congressional mandate that required the Fed to set targeted growth rates for the money supply and report on its success or failure to meet the targets. However, as the Board of Governors noted in its Annual Report for 1979, “It was felt this procedure had become less reliable in an environment of rapid and variable inflation.”

“By emphasizing the supply of reserves and constraining the growth of the money supply through the reserve mechanism, we think we can get firmer control over the growth in money supply in a shorter period of time,” Volcker told the assembled reporters. “But the other side of the coin is in supplying the reserve in that manner, the daily rate in the market…is apt to fluctuate over a wider range than had been the practice in recent years” (Federal Reserve Bank of St. Louis 1979a).

As a result of the new focus and the restrictive targets set for the money supply, the federal funds rate reached a record high of 20 percent in late 1980. Inflation peaked at 11.6 percent in March of the same year. Meanwhile, the new policy was also pushing the economy into a severe recession where, amid high interest rates, the jobless rate continued to rise and businesses experienced liquidity problems. Volcker had warned that such an outcome was possible soon after the October 6, 1979, FOMC meeting, telling an ABC News program that “some difficult adjustments may lie ahead,” (Federal Reserve Bank of St. Louis 1979b). With the economy now facing a recession, it is perhaps not surprising that the Fed came under widespread public criticism.

Farmers protested at the Federal Reserve’s headquarters, and car dealers, who were especially affected by high interest rates, sent coffins containing the car keys of unsold vehicles. Many people also wrote letters to Volcker telling him how they had saved for many years to purchase a home but were now unable to because of high rates.

In the 1980 presidential election, Ronald Reagan defeated Carter. With the Fed in a position to play a crucial role in the success of the new administration, Reagan’s staff wanted to arrange a meeting between the new president and Volcker.

The two discussed several issues during the meeting. A member of Reagan’s Council of Economic Advisers noted on behalf of the administration that they recognized the Fed’s independence (Neikerk 1987). But that view was not held by everyone.

With interest rates high in the Volcker-led fight on inflation, the attacks came from both political parties. “We are destroying the small businessman. We are destroying Middle America. We are destroying the American dream,” conservative Congressman George Hansen said during a 1981 hearing (Todd 2012). During the same hearing, Democrat Frank Annunzio shouted and pounded his desk, accusing the Fed of favoring big business, and Texas Congressman Henry Gonzalez threatened to introduce a bill to impeach Volcker and most of the Fed’s other governors.

A couple of weeks later, Treasury Secretary Donald Regan directly criticized the Fed’s position during an interview with a New York Times reporter.

“What I am suggesting is that if (money supply growth) stays here, you’re going to have a severe recession,” said Regan, who then went on to suggest how the money supply needed to be adjusted going forward (Todd 2012).

Volcker responded to the treasury secretary’s comments at an American Bankers Association meeting in San Francisco two months later, saying the Fed had no plans to ease the tight money supply despite “some unusual public communication from the secretary of the Treasury.” He went on to say that the Fed’s concern was to restrain the money supply. “Inflating the money supply now would only aggravate the situation,” he said (Todd 2012).

By the summer of 1982, House Majority Leader James C. Wright Jr. was calling for Volcker’s resignation. Wright said he had met with Volcker eight times in hopes of giving the Fed chairman an “understanding” of what high interest rates were doing to the economy, but Volcker was apparently not getting the message (Todd 2012).

However, in July the data showed that the recession had bottomed out. Volcker told lawmakers that he was backing off his previous targets for tight monetary policy and that a recovery in the second half of the year – long touted and targeted by the Reagan administration – was “highly likely.”

At the same time, after hitting its peak in 1980, inflation began to decline, falling to 6.1 percent in early 1982 and then to 3.7 percent in the following year. The unemployment rate hit a peak of 10.8 percent in late 1982 before beginning a steady decline.

With the recovery at hand and inflation greatly reduced, the political pressure on Volcker and the Federal Reserve eased, and the economy entered a new period of sustained growth and low inflation. Prior to the dramatic announcement in October 1979, the Federal Reserve’s policies had produced high and variable inflation and contributed to macroeconomic instability. There was little confidence that inflation could rapidly be brought under control without enormous economic disruption. The prevailing strategy of gradualism had been to bring the inflation rate down slowly over time through fine-tuned adjustments in the federal funds rate. By breaking with traditional operating procedures, and persevering despite a recession that was quite large by historical standards, the Fed re-established credibility for low inflation (Goodfriend and King 2005). In the end, the recession turned out to be smaller than many gradualists had predicted. That credibility laid the groundwork for the long period of sustained growth, known as the Great Moderation, that followed.

Todd, Tim. “Fighting Inflation, Congress and the White House.” In The Balance of Power: The Political Fight for an Independent Central Bank, 1790-Present, 43-50. Kansas City: The Federal Reserve Bank of Kansas City, 2012.