One of the most important laws to affect the Federal Reserve in its 100-year history, the Act was aimed at deregulating depository institutions and improving the Fed's control of monetary policy. 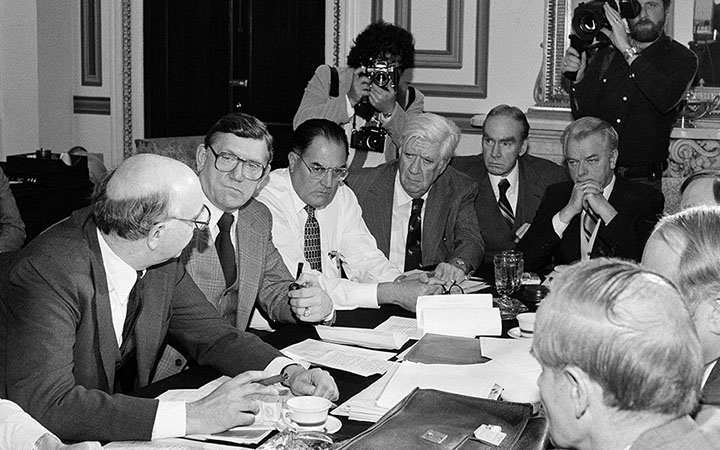 One of the most important pieces of legislation to affect the Federal Reserve in its hundred-year history is known formally as the Depository Institutions Deregulation and Monetary Control Act. It was signed into law by President Jimmy Carter on March 31, 1980. The title of the act itself indicates two major areas of concern that the legislation hoped to address – the deregulation of institutions that accept deposits and efforts to improve the control of monetary policy by the Federal Reserve.

The regulatory environment that banks and other depository institutions operated under required a major overhaul. Interest rates rose to double-digit levels, primarily as a result of high rates of inflation. However, the rates that depository institutions were allowed to pay on their deposits were limited by laws in effect since the Great Depression. Consequently, savers began to avoid banks as vehicles for their savings and placed their funds in unregulated entities such as mutual funds. Unfortunately, some savers, notably lower-income households, could not access such alternatives easily, and the rate on their savings was significantly below what was available in financial markets. This set of circumstances made saving less attractive and at the same time reduced banks’ traditionally important role in financial markets.

How to Increase Savings

Among the purposes of the act were “to provide for the gradual elimination of all limitations on the rates of interest which are payable on deposits and accounts, and to authorize interest-bearing transaction accounts.” Up until this time, the maximum interest rate that banks and other institutions could pay on deposits was regulated by the federal government under what was known as Regulation Q. In fact, banks were not allowed to pay any interest on checking accounts (or “demand deposit” accounts), and at the time the act was signed, the rate on savings accounts at banks was set at 5.25 percent. But market interest rates were in double digits, as witnessed by the rate on short-term Treasury securities of over 12 percent. So, banks and other traditional types of depository institutions were at a severe disadvantage in attracting deposits compared with less-regulated competitors, such as money market mutual funds. Because of restrictions on interest rates, savers who used traditional banks and other types of depository institutions were penalized by being denied a market rate of interest for their funds. Not surprisingly, funds flowed out of banks, and savings by households tended to suffer, a process known as “disintermediation.”

Title II of the act is known as the Depository Institutions Deregulation Act of 1980. It phased out restrictions on interest rates that depository institutions could offer on their deposits. To ensure an orderly transition to this new environment, the phase-out lasted six years. Eliminating restrictions on rates not only improved the ability of banks to compete for funds, it encouraged consumers to save more since they were now able to get a higher return on their savings accounts and had greater access to different accounts that paid a market rate of interest.

Reserve requirements mandate that depository institutions set aside a certain amount of their funds either in the form of vault cash or the accounts they keep at regional Federal Reserve Banks. The amount they have to keep in reserve is based on the size of their deposits. The act contained an eight-year phase-in of new reserve requirements for nonmember institutions. Also, any institution holding reserves would now be eligible for discount-window borrowing, which had previously only been available to member banks. Additional reporting requirements for depository institutions’ assets and liabilities were also part of the act, again to help the Fed gain greater control of the money supply.

Another important feature of the Monetary Control Act was the requirement that the Federal Reserve begin charging fees for certain services it provided. These included currency and coin storage for institutions, check clearing and collection services, wire transfers, and safekeeping of securities. The fees were required to be sufficient to cover all direct and indirect costs associated with the provision of these services. Because some large banks also provided many of these same services, the Federal Reserve was required to give due regard to competitive factors and the provision of an adequate level of such services nationwide.

Besides the monetary control and deregulatory components of the legislation, certain other features of the act affected financial markets and consumers. For instance, the act authorized banks to provide automatic transfer services from checking to savings accounts and expanded deposit insurance coverage from $40,000 to $100,000. It also expanded the powers of savings and loans, which, unfortunately, had some unintended consequences.

Since the passage of the Federal Reserve Act in 1913, few pieces of legislation have had as significant an impact on the Federal Reserve as the Depository Institutions Deregulation and Monetary Control Act. After passage of the act, Paul Volcker noted that Titles I and II “will undoubtedly take their place among the most important pieces of financial legislation enacted in this century” (Volcker 1980). Applying reserve requirements to all institutions that accept deposits provided the Fed with valuable ammunition needed at the time to fight inflation and help stabilize the economy. Opening up the discount window to these same institutions and charging for certain services represented a dramatic shift in the operations of the Fed. Freeing up financial markets so banks could compete for depositors’ funds benefited consumers, increased savings, and helped markets function more smoothly. Three decades later, most would agree that allowing banks to compete for funds makes savers better off. However, financial innovations have made traditional measures of the money supply less informative for monetary policymaking. Despite this development, requiring all depository institutions to hold reserves and granting them access to the discount window do provide for a more level regulatory playing field across institutions.

Volcker, Paul. Statement by Paul A. Volcker, Chairman, Board of Governors of the Federal Reserve System, Before the Subcommittee on Domestic Monetary Policy of the Committee on Banking, Finance & Urban Affairs, House of Representatives, May 15, 1980, via FRASER.