Signed into law by President Bill Clinton in September 1994, the law removed several obstacles to banks opening branches in other states and provided a uniform set of rules regarding banking in each state. 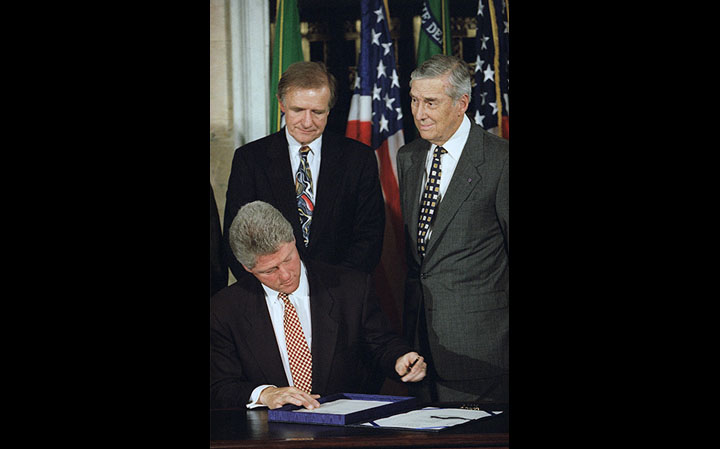 The Riegle-Neal Interstate Banking and Branching Efficiency Act of 1994 removed many of the restrictions on opening bank branches across state lines. These restrictions were largely the result of the McFadden Act in 1927 and other laws that attempted to address long-standing concerns about the concentration of financial activity and worries that large banking organizations operating in multiple states could not be adequately supervised. In addition, the act allowed banking organizations to acquire banks in any other state under a uniform, nationwide standard.

Throughout the 1980s and early 1990s federal lawmakers launched several efforts to remove the interstate branching prohibitions, but their proposals failed, due in part to opposition from a coalition of small banks and insurance companies. The banks feared they would face a competitive disadvantage once large financial institutions entered their markets, and insurance companies were concerned about new competition from banks that had begun to offer insurance products to their customers.

However, starting in the early 1980s some states began whittling away at the restrictions on interstate banking and made changes to their own laws that permitted out-of-state banks to enter their states under specific conditions.1 By 1990, forty-six states had made changes allowing out-of-state bank holding companies to acquire in-state banks in some circumstances. The situation led Treasury Secretary Lloyd Bentsen to comment in 1993 that the nation effectively had an interstate banking system, but it was one that was working under “laws and regulations made for another time in America” (Federal Deposit Insurance Corporation 1997).

Through Bentsen, the Clinton administration made clear that it would support moving away from the current patchwork system, and the work of writing a new law to allow for uniformity at the federal level fell to Sen. Donald Riegle, a Michigan Democrat who chaired the Senate Banking Committee, and Rep. Stephen Neal, a Democrat from North Carolina who headed the House Banking (now called Financial Services) Subcommittee on Domestic Monetary Policy.

One of the main proponents of the new interstate banking reform effort was Hugh L. McColl, CEO of North Carolina-based NationsBank.

During a speech in Little Rock, Ark., in December 1992, McColl said it was time for the banking industry to consolidate following the banking crisis of the 1980s and “let the strong take over the weak so that we can move forward,” he said (Chaddock 1994).

Amid this push for the removal of interstate banking restrictions, the opposition from small banks was not as vocal as it had been in earlier legislative attempts because of new concessions the smaller institutions won. The American Bankers Association had worked with more than one hundred bankers to come to an agreement on a measure that would give states the ability to opt out of any new federal interstate banking legislation related to interstate branching. In addition, smaller banks pushed for, and received, a provision that would allow states to limit interstate entry to the acquisition of existing banks and also set a minimum age requirement of up to five years for the banks that could be acquired.

According to media accounts of the time, a few smaller banks still opposed the measure. Echoing past concerns, a spokesman for the Independent Bankers Association of America worried the law would result in more financial industry concentration. Despite these concerns, the bill received wide bipartisan support.

As passed, the Riegle-Neal Interstate Banking Act of 1994 provided for uniform branching and interstate acquisition rules for the entire country. These new rules included the following:

Following the Senate’s passage of the Act on September 13, 1994, President Bill Clinton praised the new legislation. “Today this country took an historic step, one that had been delayed for much too long, to help American banks better meet the needs of our people, our communities and our economy,” Clinton said (Clinton 1994). When the president signed the bill on September 29 in the Treasury Department’s ornate Cash Room, several bankers were on hand to show their support.

“Many observers think this legislation is about mergers and acquisitions in the banking industry. Wrong!” said Richard Kovacevich, chief executive of Minneapolis-based Norwest Corp., at the bill’s signing ceremony. “It’s about allowing banks to serve our customers wherever they are, wherever they want to be, and doing it faster, better and at a lower cost. No matter where they live, work, move or travel, consumers will be able to bank there, too” (Cobb, Dahl, and Fettig 1995).

While its supporters touted the benefits of the Riegle-Neal Act for bank customers, the law also marked a new period of banking deregulation that would later include the removal of the barriers between commercial and investment banking with the Gramm-Leach-Bliley Act of 1999.