The Act was signed into law by President George H.W. Bush in December 1991 in response to problems in the banking and thrift industries. It required federal banking agencies to take prompt corrective supervisory actions when an insured depository institution’s capital declines, and it required the FDIC to choose the resolution method that minimizes the costs to taxpayers of a bank failure. 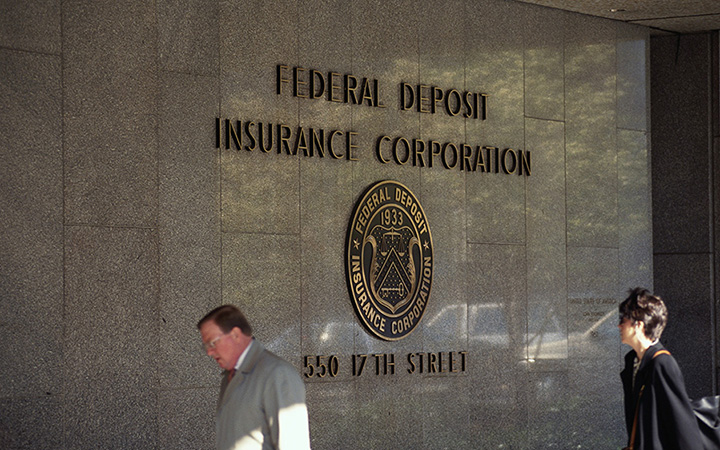 The Federal Deposit Insurance Corporation Improvement Act (FDICIA) was adopted in response to serious problems in the banking and thrift industries. After the establishment of the Federal Deposit Insurance Corporation (FDIC) in 1934 the number of bank failures in the United States averaged roughly fifteen per year until 1981, when the number of bank failures began to rise and reached roughly 200 per year by the late 1980s. The wave of bank failures occurred due to a surge and subsequent collapse in industries including energy, agriculture and real estate. From roughly the beginning of 1980 until the end of 1991, nearly 1,300 commercial banks either failed or required failing bank assistance from the FDIC. The FDIC took action to close down insolvent institutions and by 1991 had become severely undercapitalized (Mishkin 1997).

In addition to the wave of bank failures, the thrift crisis contributed to the problems in the financial services industry, which ultimately led to the passing of FDICIA. The thrift industry breakdown began prior to the problems in the banking industry. In the late 1970s there was a large, unanticipated increase in interest rates. For savings and loan institutions (S&Ls), this meant depositors moving funds out of S&Ls and into institutions that were not restricted on the amount of interest they could pay their depositors. It also meant a significant decrease in the present value of their fixed-rate mortgages. The congressional deregulation of S&Ls in 1980 gave these institutions many of the same capabilities as banks without the necessity of adherence to strict regulation, causing regulatory forbearance as an additional strain in the early 1980s. Regulatory forbearance led to S&Ls taking on greater risk, which ultimately resulted in losses to taxpayers of more than $100 billion. From 1983 to 1990, nearly 25 percent of S&Ls were closed, merged, or placed in conservatorship by the Federal Savings and Loan Insurance Corporation (FSLIC). This collapse drove the FSLIC into insolvency, leading to its abolishment by the Financial Institutions Reform, Recovery, and Enactment Act (FIRREA) in 1989.

These challenging times in both the banking and thrift industries ultimately led to the passing of the FDICIA. Congress enacted FDICIA in 1991 to implement regulatory changes that would ensure the safety and soundness of both the banking and thrift industries (Mishkin 1997). The main overarching provisions of the act, which was implemented in 1994, include “prompt corrective action” and “least cost resolution.” Additional sections of FDICIA include limitations on the ability of undercapitalized and critically undercapitalized institutions to borrow from the Fed, the annual or eighteen-month examination cycle requirement for banks, introduction of risk-based deposit insurance premiums, as well as improved and more uniform disclosures on savings accounts.

The prompt corrective action provision requires federal banking agencies to take progressively severe, corrective, supervisory actions as an insured depository institution’s capital declines. The agencies must assign individual institutions to one of five capital categories – well capitalized, adequately capitalized, undercapitalized, significantly undercapitalized, or critically undercapitalized – as determined by selected capital measures. When a bank falls into any of the last three capital categories, its primary federal regulator must take certain mandatory supervisory actions and may supplement these with discretionary actions. Banks that become critically undercapitalized must be placed in conservatorship or receivership within ninety days unless they restore their capital or their federal regulator and the FDIC believe other actions are warranted. These prompt corrective action provisions are among the most important features of the FDICIA (Spong 2000). In essence, these provisions require the FDIC and other federal banking supervisors to intervene earlier and more vigorously when a bank gets into financial trouble, with the ultimate goal of minimizing the losses of all involved parties.

The least-cost resolution provisions require that the FDIC choose the resolution method that minimizes the cost to taxpayers of a bank failure. “This provision is generally understood to limit the FDIC’s ability to absorb losses that would otherwise be borne by uninsured depositors and non-deposit creditors” (Eisenbeis and Wall 2002). It is important to note that there is a systemic exception in FDICIA to the least-cost resolution of failed banks. Section 141 of the act “provides for an exception that preserves the potential for banks to be considered too big to fail” (Wall 2010). This “too big to fail” provision has come under a considerable amount of scrutiny in recent years.

Many economists have studied the impact of FDICIA on the banking and thrift industries in the years since its passing. Serious improvements in the banking industry were apparent in the years immediately following the implementation of FDICIA. This banking recovery allowed the FDIC to recapitalize the Bank Insurance Fund. In addition, FDICIA increased the FDIC’s ability to borrow from the Treasury from a limit of $5 billion to $30 billion. It further provides the FDIC with the ability to borrow another $45 billion for working capital money that would be repaid as the FDIC sold the assets of failed banks (Mishkin 1997). By the end of 1996, virtually all remaining banks were well or adequately capitalized—meaning they were classified in the top two of the five FDICIA capital categories. In the thrift industry, by the end of 1996 only 0.5 percent of the surviving institutions, holding approximately 0.2 percent of industry assets, were classified as “undercapitalized.” The wave of thrift failures contributed to a substantial consolidation in the industry. The number of thrift institutions had dropped from nearly 3,000 in 1989 to less than 1,500 in 1996 (Benston and Kaufman 1997).

In more recent years, the provisions of the FDICIA have been put to the test as the United States experienced the most recent financial crisis. Most economists agree that FDICIA has had a generally positive impact on the health and stability of the financial services industry; however, questions have been raised about the prompt corrective action provision and why it didn’t perform better during the crisis and meet the expectations many had for it. These concerns led to the Dodd-Frank Act mandating a study on prompt corrective action. Among other conclusions, the study, conducted by the Government Accountability Office (GAO), indicated that prompt corrective action may not perform well during rapid declines in financial conditions. “It is impossible to know whether the enactment of FDICIA explains differences in Federal Reserve lending practices during 2007-10 and the previous period of financial distress in the 1980s. However, it does seem clear that Federal Reserve lending to depository institutions during the recent episode was consistent with the Congressional intent of this legislation” (Gilbert et al. 2012).1