Home > Federal Reserve History > From WWII to the Treasury-Fed Accord

From WWII to the Treasury-Fed Accord

The Federal Reserve pegged interest rates at a low level during World War II in order to facilitate the financing of government debt and enforced that peg for six years after the war’s end. 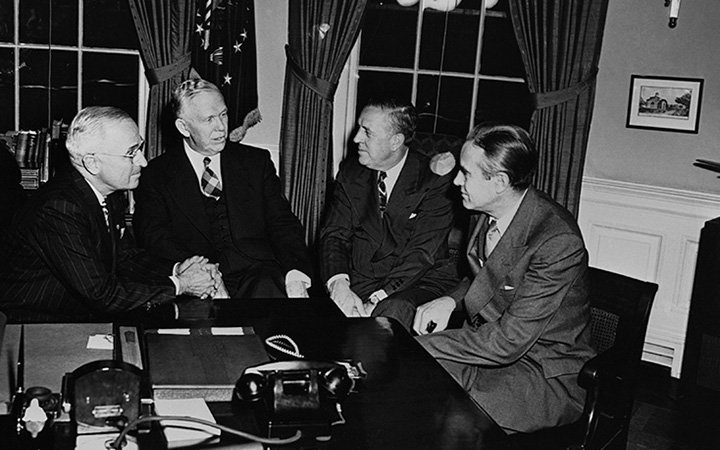 Just as it had in World War I, in World War II, the Fed pegged interest rates at a low level in order to facilitate the financing of government debt. As was the case after World War I, the Treasury enforced that rate peg well after the end of the war. The Fed struggled internally about whether to challenge the Treasury over its subservience. Resolution replaced indecision in fall 1950 with the entry of the Chinese into the Korean War and the belief in the imminence of World War III.

Both expectations created by historical experience and the intellectual environment worked against a challenge to the Treasury. Based on the experience after the Civil War and World War I, the widespread expectation existed that deflation would follow the war. The juxtaposition of high unemployment in the Depression and low unemployment in World War II created an intellectual consensus in favor of Keynesian ideas. Keynesians believed that any increase in private consumption would fail to counter the inevitable decline in military expenditures after the war and that the Depression would return as a result.

The assumed practical irrelevance of monetary policy constituted an important component of the Keynesian consensus. According to this view, the economy was in a liquidity trap at a low rate of interest in which the public simply accommodated changes in the quantity of money. The velocity of money would vary according to the psychology of investors. The general belief that markets did not work carried over to an assumption that if the Fed did not peg government bond rates, then wild, erratic swings in bond prices would destabilize the government bond market.

Within the Federal Reserve System, there were two dominant individuals: Marriner Eccles, who had been chairman of the Board of Governors since 1934, and Allan Sproul, who had been president of the Federal Reserve Bank of New York since 1941. Eccles had been a close, informal adviser to President Roosevelt and believed that he (Eccles) had originated deficit spending as a tool of countercyclical policy independently of Keynes. After the war, Eccles believed that the government should control inflation through running budget surpluses.

Sproul wanted to break free from Treasury dominance and return the New York Fed to the preeminent position it held before the war. Along with his adviser John Williams, Sproul wanted to conduct monetary policy in a way intended to stabilize the economy. After the war, the Philadelphia Fed was the major opponent of the Fed’s rate peg. Thomas McCabe was the chairman of the Board of Directors at the Philadelphia Fed. Although he was a businessman, he benefited from the advice of Winfield Riefler, who was an economist and adviser to the Bank.

The end of price controls in summer 1946 unleashed the suppressed inflation that had built up during the war. That inflation ignited the first debate within the Fed over whether to challenge the Treasury. In spring 1947, the Philadelphia Fed urged the Board of Governors to abandon the rate peg and raise interest rates to counter inflation. The Board sent a letter to Philadelphia sternly reprimanding it. The Board not only used the language “monetary cranks” but also made clear that any challenge to the Treasury would be politically futile. The transitory nature of the inflation shock and the start of recession in late 1948 put debate on hold, but only temporarily.

The vigorous economic recovery that commenced after October 1949 revived concerns within the Fed over the rate peg. Those concerns intensified with the outbreak in June 1950 of the Korean War. In summer 1950, the Board chafed at the high-handed treatment by the Treasury. Treasury Secretary John Snyder would simply announce the terms of a Treasury offering and assume that the New York open-market desk would intervene to buy whatever securities remained unsold. The practical issue was whether the desk would keep bank reserves unchanged and allow market forces to set interest rates or whether it would accommodate whatever reserves demand emerged at the rate peg. In addition, there was a personal element. In 1948, President Truman had not reappointed Eccles as chairman of the Board of Governors but had instead appointed Thomas McCabe. However, Eccles remained on the Board to serve out his term as governor.

The Treasury-Fed dispute simmered until November 1950 when the Chinese entered the war by crossing the Yalu River that marked the boundary between China and Korea. A confrontation between China and the United States appeared imminent with the Soviet Union entering on the side of its client North Korea and then seizing Berlin by force. The prospect of World War III created the anticipation of the return of the inflation, price controls, and rationing of wartime. Commodity prices and purchases of consumer durables soared.

The issue of the rate peg forced the Fed to take a stand that would be fundamental to the idea of a modern central bank. After World War II, monetary policymakers had retained the conventional view that inflation arose from an excessive extension of credit, which through speculative excess raised prices of goods and assets to unsustainable heights. Inevitably, deflation would follow inflation when the credit-market bubble burst. However, with the surge in inflation following the end of price controls, the price level had risen permanently. Neither deflation nor depression followed. In January 1951, Eccles broke with this real bills tradition when he stated that it was the unrestrained creation of bank reserves in defense of the rate peg that made the Federal Reserve into “an engine of inflation.”

In this supercharged environment, Truman called the entire Federal Open Market Committee to the White House at the end of January 1951. Although the FOMC made no commitment to maintain the rate peg, after the meeting the White House press secretary announced that the FOMC had agreed to maintain the price of government securities at the pegged rate. Eccles challenged Truman by conveying to the New York Times and the Washington Post a memorandum summarizing the FOMC’s view that it had made no commitment to the president.

In the heated public debate that followed, the FOMC wrote a letter to the president stating that inflation was caused by the excessive money creation forced by central bank monetization of government deficits. Despite pressure from congressmen, bankers (the Federal Advisory Committee), and of course the Treasury, the FOMC held fast. In February 1951, it informed the Treasury that it was no longer willing to maintain the rate peg.

Under pressure from a deteriorating bond market, Secretary Snyder agreed to negotiate an understanding with the Fed. Snyder then went into the hospital for cataract surgery and left negotiations to his assistant, William McChesney Martin Jr. The result was the Treasury-Fed Accord of 1951. The language was ambiguous. However, the White House forced the resignation of McCabe and appointed William McChesney Martin Jr. in his place. To the surprise of everyone, Martin was not the Treasury’s man. He carried into his position as chairman of the Board of Governors a firm belief in the importance of price stability and the responsibility to the Fed for its achievement.