The Federal Reserve's Role During WWII

The Federal Reserve supported the war effort in several ways: it helped finance wartime spending, fund our allies, embargo our enemies, stabilize the economy, and plan the return to peacetime activities. 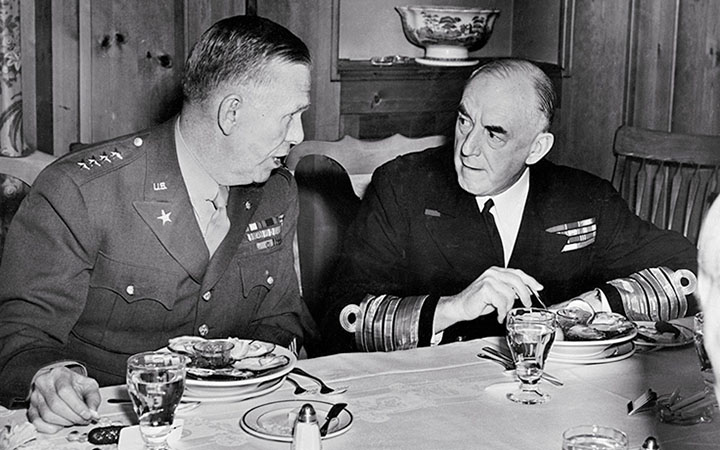 The Great Depression strained societies around the globe. The economic catastrophe produced political tensions that grew throughout the 1930s. World War II was a result. In September 1939, Germany’s invasion of Poland triggered war among the principal European powers. In December 1941, Japan attacked Pearl Harbor. Germany and Italy declared war on the United States. The American “arsenal of democracy” joined the Allied nations, including Britain, France, China, the Soviet Union, and numerous others, in the fight against the Axis alliance. The Allied counteroffensive began in 1942. The Axis surrendered in 1945.

When the United States entered the war, the Board of Governors issued a statement indicating that the Federal Reserve System was “. . . prepared to use its powers to assure at all times an ample supply of funds for financing the war effort” (Board of Governors 1943, 2). Financing the war was the focus of the Federal Reserve’s wartime mission. This mission differed from the mission of the System before and after the war.

Finance formed a foundation for the war effort. Before the war, America’s military was small, and its weapons were obsolescent. The military needed to purchase thousands of ships, tens of thousands of airplanes, hundreds of thousands of vehicles, millions of guns, and hundreds of millions of rounds of ammunition. The military needed to recruit, train, and deploy millions of soldiers to theaters of action on six continents. Accomplishing these tasks entailed paying entrepreneurs, inventors, and firms so that they, in turn, could purchase supplies, pay workers, and produce the weapons with which America’s soldiers and sailors would defeat its enemies. Military expenditures rose from a few hundred million a year before the war to $85 billion in 1943 and $91 billion in 1944.1

Plans for financing the war were devised by the Treasury and the Federal Reserve. These organizations met frequently to determine how to finance the war and organize machinery for marketing United States government securities.

The plan called for financing the war to the greatest extent possible through taxation and domestic borrowing.2 Paying for the war through levies on current incomes would minimize inflationary pressures, promote economic expansion during the war, and promote economic stability when peace returned.

To direct the savings of American citizens into the war effort, the Treasury and Federal Reserve marketed a range of securities that would fit the needs of all classes of investors, from small savers who wished to invest for the duration of the war to large corporations with temporarily idle funds. To distribute these securities, the twelve Federal Reserve Banks organized Victory Fund committees and established plans to market war bonds in cooperation with commercial banks, businesses, and volunteers.

To keep the costs of the war reasonable, the Treasury asked the Federal Reserve to peg interest rates at low levels. The Reserve Banks agreed to purchase Treasury bills at an interest rate of three-eighths of a percent per year, substantially below the typical peacetime rate of 2 to 4 percent. The interest-rate peg became effective in July 1942 and lasted through June 1947. The Reserve Banks reduced their discount rate to 1 percent and created a preferential rate of one-half percent for loans secured by short-term government obligations, substantially below the 3 to 7 percent that had been common during the 1920s. All of the Reserve Banks implemented these rates in the spring of 1942. The rates remained in effect until January 1948.3

The Federal Reserve focused on supporting war financing while minimizing inflationary consequences. Inflation was a fear because wartime policies increased incomes, employment, and the money supply, while restricting the available supply of consumer goods. When more money chases fewer goods, prices typically rise. To prevent price increases from undermining the war effort, the government instituted an array of programs. These included regulations on the prices of goods and wages of workers and a rationing program for scarce commodities and consumer durables. The Federal Reserve aided these efforts by regulating consumer credit. The Board’s Regulation W imposed large down payments and short maturities on loans to purchase a wide range of consumer durables. Installment loans were limited to twelve months. Single-payment loans were limited to ninety days.

To enable the Federal Reserve to accomplish its wartime tasks, the Board of Governors asked Congress to amend the Federal Reserve Act. One amendment enabled the Board to change reserve requirements in banks in New York City and Chicago, known as central reserve cities, without changing requirements for other banks. A second amendment authorized the System to purchase government securities directly from the Treasury. A third amendment exempted war loan deposits from reserve requirements for the duration of the emergency.

The president also issued a series of executive orders that shaped the System’s wartime roles. Executive Order 9112, issued on March 26, 1942, established a program of guaranteed loans to industry for war production. Executive Order 9336, issued on April 24, 1943, expanded the scope of the program. For this program, the Board devised the general policies, after consulting with the Reserve Banks as well as the War Department, Navy Department, Maritime Commission, Office of Lend-Lease Administration, and the War Shipping Administration. The Reserve Banks and branches acted as fiscal agents for those organizations. The banks and branches analyzed the financial integrity of loan applicants, determined the types of financing best suited to meet the borrowers’ needs, prepared the necessary documents, and, for all loans under $100,000 (i.e., more than half of all loans), expedited the process by handling the loan on the spot. This swift, decentralized procedure expedited operations for the government and loan applicant, speeding the rate of industrial expansion.

The twelve Federal Reserve banks and twenty-four branches played prominent roles in these efforts, and their work on behalf of the government in connection expanded throughout the war. In 1939, the Reserve Banks employed about 11,000 individuals. In 1943 and 1944, employment in Reserve Banks hit a wartime peak of over 24,000. The War Manpower Commission declared Reserve Banks’ efforts to be essential to the war effort. So, Reserve Bank employees were not subject to the draft, although hundreds of Federal Reserve employees volunteered for military service.

About half the System’s total personnel were engaged in fiscal agency activities. The majority of those employees were assigned to savings bond operations. The bond drives entailed considerable work by employees and officers of the reserve banks, including the bank presidents.

The handling of war savings bonds was the largest single operation performed by the Federal Reserve Banks. The Federal Reserve cooperated fully with the Treasury in the task of organizing and administering the war loan drives. The work included assistance in the preparation and distribution of publicity materials such as manuals and letters of instruction to workers in the drives, printing and distribution of subscription blanks, and tabulation of detailed reports on the results of the drives.

The Reserve Banks issued savings bonds directly to the public, and, as fiscal agents, maintained consignment accounts with thousands of banks and other agents who issued savings bonds. The Reserve Banks coordinated their activities as well as the activities of thousands of volunteers and companies who helped to market the bonds. The majority of the bonds issued were in small denominations ($25 or less), which explains the tremendous amount of work involved. As the bonds were sold, reports and remittances were received as well as the bond stubs, which indicated who purchased each bond. The stubs were consolidated with those representing bonds issued directly by Reserve Banks, and then tabulated and forwarded to the Treasury. The Reserve Banks were the sole redemption agency for the bonds outside of Washington, DC. Many Reserve Banks and branches set up separate savings bond redemption centers outside their regular banking quarters.

The Federal Reserve Board and Banks marketed war bonds to their own employees. Each entity tracked total sales and publicized it in the workplace. Employees of the New York Fed, for example, purchased over $87,000 worth of bonds in April 1943, enabling the army to purchase a 105mm howitzer and a P-51 Mustang fighter plane. In August 1944, the New York Fed received a letter and photograph of the plane, named the “N.Y. Federalist,” which was based in England and flew operations over France and Germany

The Federal Reserve Bank of Chicago rendered a special service to the Treasury in handling cases of reissued savings bonds that could not be settled without clearance from the Treasury. The Chicago Fed handled all of these cases, from all parts of the country, whether submitted through a reserve bank or directly through the Treasury. The Chicago Fed also provided a safekeeping service for all savings bonds purchased by personnel of the War Department. The Federal Reserve Bank of Cleveland provided safekeeping services for savings bonds purchased by naval personnel.

The Federal Reserve Bank of New York carried out operations of the Exchange Stabilization Fund in accordance with authorizations and instructions from the Treasury. These operations included the purchase and sale of gold and foreign exchange and the maintenance of accounts for various foreign central banks and foreign governments in connection with relations between the United States and its allies overseas. The NY Fed engaged in foreign transactions on an extensive scale. It held gold and dollar accounts for fifty-nine foreign nations. It became increasingly involved in handling official remittances from the United States to foreign countries, particularly in connection with the maintenance abroad of American armed forces.

All of the Reserve Banks acted as agents for the Treasury’s foreign funds control operations. The goal was to facilitate legitimate transactions while erecting barriers against Axis manipulation of dollar assets and Axis access to international markets. The Reserve Banks processed applications for licenses and reports of transactions.

In sum, the Federal Reserve played important roles during World War II. The Fed helped to finance the war, fund our allies, embargo our enemies, stabilize the economy, and plan the postwar return to peacetime activities.

While the Fed helped on the home front, thousands of Federal Reserve employees and millions of Americans enlisted in the armed forces; over 400,000 of those who served, including scores of Fed employees, gave their lives for their country. Men from the Federal Reserve fought and died in the hedgerows in Normandy, the Bulge in Belgium, the mountains of Italy, and the beaches of the Pacific. In an oral history interview, a career employee of the Federal Reserve Bank of Dallas recounted her most memorable day at work: December 8, 1941. She and her coworkers listened to the radio as President Roosevelt described the attack on Pearl Harbor and announced Congress’s declaration of war against Japan. Afterward, silently, one after another, seven men rose from their desks and left the building to volunteer for service.