Home > Federal Reserve History > Time Period: WWII and After > The Second World War and Its Aftermath

The Second World War and Its Aftermath

Monetary policy fundamentally changed from the onset of World War II in 1941 to the Treasury-Fed Accord in 1951. 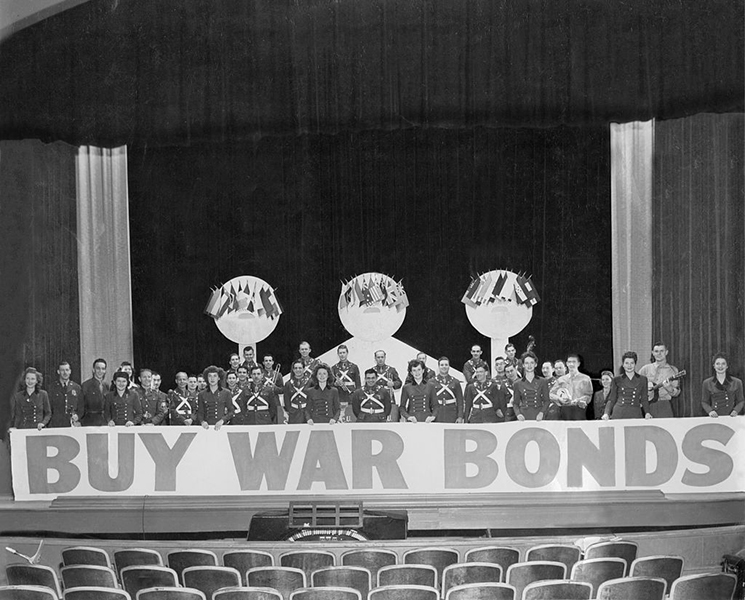 The outbreak of war in Europe substantially changed the way in which the Federal Reserve System was expected to operate as the nation’s central bank in a period during which US participation in the conflict was imminent. The most important challenge for the System was to deal with the possibility of very large fiscal deficits due to increased war expenditures. Even before the period of active US participation in the conflict, the expansion of the defense program and the decision to help finance allies’ purchases of war material from the United States (under the so-called lend-lease program) significantly increased US government financing needs. After the decision to actively participate in the conflict, the US government substantially increased its expenditures, confirming previous expectations. Despite the fact that the Treasury relied more heavily on taxation than in World War I and despite increased tax revenue from the substantial expansion of industrial production, the active participation in the war resulted in a sharp increase in the federal deficit.

Perhaps the most important actions performed by the System during the war were to control government bond prices to promote stable financial markets and (even more critical) to help reduce the interest rates on financing the extraordinarily large fiscal deficits associated with active participation in the war. In 1939, shortly before the beginning of the conflict in Europe, the System made some open-market purchases to influence the yields on short-term government bonds. The goal was to promote stability in short-term funding markets and prevent market disorder in the face of uncertainty at the outset of the war. Once the United States formally entered the conflict, the system made a firm commitment to support government bond prices. In April 1942, the Federal Open Market Committee announced that it would maintain the annual rate on Treasury bills at three-eighths of 1 percent by buying or selling any amount of Treasury bills offered or demanded at that rate. For longer-maturity government securities, the System also established a maximum yield (or a minimum price) by standing ready to buy whatever amount of these securities was necessary to prevent their yields from rising above the maximum yield. Such a commitment to maintain low yields (high prices) of government bills and bonds necessarily resulted in the purchase of a significant volume of government securities, producing a substantial expansion of the System’s balance sheet and, in particular, of the monetary base. Indeed, the monetary base increased by 149 percent from August 1939 to August 1948.

An additional factor contributing to the increase in the monetary base, and as an immediate consequence of the outbreak of war in Europe, was the acceleration of gold inflows as Britain and other allies paid for war materials and other supplies produced domestically by shipping gold to the United States. These two factors resulted in a vigorous expansion of the monetary base and the money supply. As a result, inflation rose significantly during the period. This happened despite price and wage controls and consumer credit controls (and despite an increased willingness of the nonbank public to hold a significant fraction of their wealth in the form of monetary assets as reflected by the marked decline in the velocity of money observed during the war).1

Most economists at the time believed that as soon as the war ended the economy would likely fall into recession and the unemployment rate would rise substantially, partly because of the experience of previous wars (and the previous decade of the Great Depression) and partly because of the widespread Keynesian view that fiscal stimulus was the most effective means of boosting domestic economic activity, and such stimulus was about to decline with the end of the war. This belief, combined with the decision to continue to hold down Treasury financing costs, certainly contributed to the continuation of the government bond support program for much longer than what would be consistent with price stability. The inability of Federal Reserve officials to persuade the Treasury to let the System abandon the government bond support program (in view of other policy considerations such as price stability) clearly demonstrated that the Federal Reserve System was effectively under Treasury control. As economist Allan Meltzer notes in his book, Chairman Marriner Eccles described his work in wartime as “a routine administrative job…[T]he Federal Reserve merely executed Treasury decisions” (Meltzer 2003, 579).

Given its inability to control growth of the monetary base through open-market operations or the discount window, under the constraints of the program to support government bond prices, the System used other tools to try to control private sector spending and curb inflation. The System imposed direct controls on consumer credit (through regulation W) by introducing minimum down payments and maximum maturities on consumer credit extended through installment loans. Because the reallocation of resources to military production restricted the supply of consumer durable goods, the controls imposed on consumer credit aimed to restrict the demand for these goods in an effort to reduce the pressure on prices. Another major action taken during the period was the increase in the reserve requirements of commercial banks in 1941. However, this measure, which was intended to restrain credit growth and the expansion of bank liabilities, had only a minor effect on the money supply and the trend in the price level.

The end of the war did not mean that the System was automatically freed from Treasury influence. Six years would go by before monetary policy was revived as a major instrument to influence aggregate spending and prices. In March 1951, the System’s policy independence from the Treasury was accomplished with the formal agreement between the Treasury and the System known as the Treasury-Federal Reserve Accord.