President Harry S. Truman signed this law on February 20, 1946, as hundreds of thousands of American soldiers returned home from World War II and the economy transitioned from wartime production. 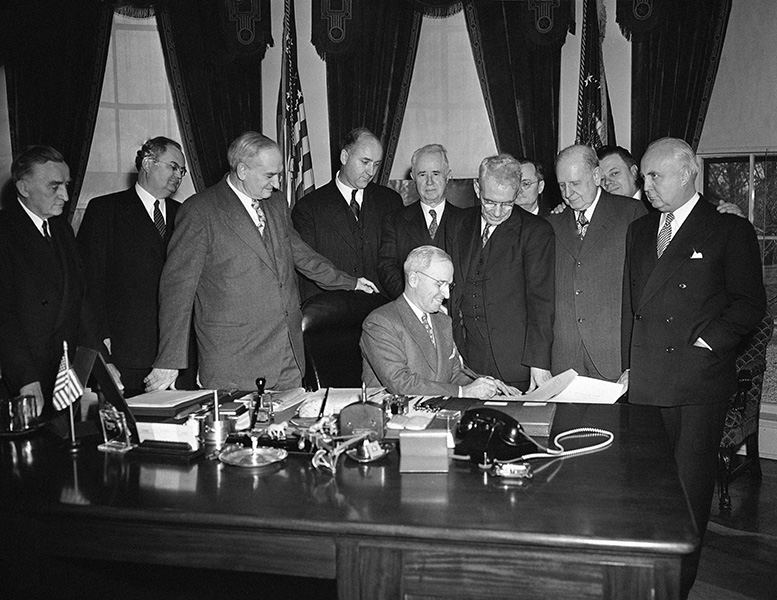 At the conclusion of World War II, with hundreds of thousands of American soldiers returning home, a large share of the workforce concerned about finding jobs as the economy transitioned from the production of wartime goods, and the specter of the Great Depression fresh in the minds of nearly all, Congress passed the Employment Act of 1946. At the heart of the act was its “Declaration of Policy”:

The Congress hereby declares that it is the continuing policy and responsibility of the federal government to use all practicable means consistent with its needs and obligations and other essential considerations of national policy with the assistance and cooperation of industry, agriculture, labor, and state and local governments, to coordinate and utilize all its plans, functions, and resources for the purpose of creating and maintaining, in a manner calculated to foster and promote free and competitive enterprise and the general welfare, conditions under which there will be afforded useful employment for those able, willing, and seeking work, and to promote maximum employment, production, and purchasing power.1

The act was the product of numerous revisions to what was originally introduced as the Full Employment Bill of 1945. It had declared:

All Americans able to work and seeking work have the right to useful, remunerative, regular, and full-time employment, and it is the policy of the United States to assure the existence at all times of sufficient employment opportunities to enable all Americans who have finished their schooling and who do not have full-time housekeeping responsibilities to freely exercise this right.2

Conspicuous in the final bill is the removal of the claim that citizens have a “right” to a job; so, too, is the acknowledgment of the importance of maintaining purchasing power — that is, the need to keep inflation in check. Stephen Kemp Bailey has attributed such changes, in large measure, to opposition among certain members of the House of Representatives who viewed the original bill as too radical and wished to produce a substitute that would “exclude the last remnants of … dangerous federal commitments and assurances (including the wording of the title), but would provide for an economic planning mechanism of some sort in the Executive and legislative branches, and for a moderate program of public works” (Bailey 1950, 165).

The Employment Act of 1946 created the Council of Economic Advisers (CEA), a three-member board that advises the president on economic policy; required the president to submit a report to Congress within ten days of the submission of the federal budget that forecasts the future state of the economy and presents the administration’s domestic and international economic priorities; and established the Joint Economic Committee – composed of members of both political parties from both the House and Senate – that is charged with, among other things, reviewing the president’s report and making recommendations to the Senate and House on economic policy.

While the 1946 act did not prescribe any specific actions, federal economic policy generally has conformed to the spirit of its language, argues Murray Weidenbaum, an economist at Washington University in St. Louis who served as chairman of the CEA during the early 1980s. He has written:

Viewed in the most fundamental light … the legislation has been successful: the act’s then-controversial statement of national policy has become adopted as part of the federal government’s bureaucratic fabric and the two new institutions the 1946 act established are still in operation. A substantial government responsibility for the overall performance of the economy is widely presumed (Weidenbaum 1996, 880).

During the three decades immediately following the passage of the 1946 act, the American economy generally performed quite well. While there was significant inflation in the last half of the 1940s, annual inflation rates typically ranged from 1 percent to 5 percent during the rest of this period. The labor market also was relatively strong, with annual unemployment rates trending around 5 percent. But during the 1970s, the United States experienced high inflation and unemployment, often referred to as “stagflation.” In early 1975, worsening economic conditions prompted Congress to adopt Resolution 133, which instructed the Federal Reserve to:

In 1977, Congress amended the Federal Reserve Act to incorporate the provisions of Resolution 133, but only after debating more ambitious proposals.

In 1978, Congress passed the Full Employment and Balanced Growth Act, better known as the Humphrey-Hawkins Act, which amended the Employment Act of 1946 and was signed into law by President Carter. The Humphrey-Hawkins Act specified explicit unemployment and inflation goals. Within five years, unemployment should not exceed 3 percent for people 20 years or older, and inflation should be reduced to 3 percent or less, provided that its reduction would not interfere with the employment goal. And by 1988, the inflation rate should be zero, again provided that pursuing this goal would not interfere with the employment goal.4

Congress could not simply mandate such unemployment and inflation rates; it could set them only as targets. Still, the act did call for, as needed, “expansion of private employment through Federal assistance” as well as “expansion of public employment.” It also included an eight-point agenda for maintaining price stability, including “the establishment of stockpiles of agricultural commodities and other critical materials to help stabilize prices, meet emergency needs, and promote adequate income to producers.” But, like the bill it amended, the final version of the Humphrey-Hawkins Act was considerably less interventionist than what was initially proposed. Earlier versions of the bill came quite close to stating that all Americans had a right to a job, just as the Full Employment Bill of 1945 had (Santoni 1986).