This amendment to the Employment Act of 1946 was signed in October 27, 1978, by President Jimmy Carter, establishing new goals for the nation’s economic policymakers. 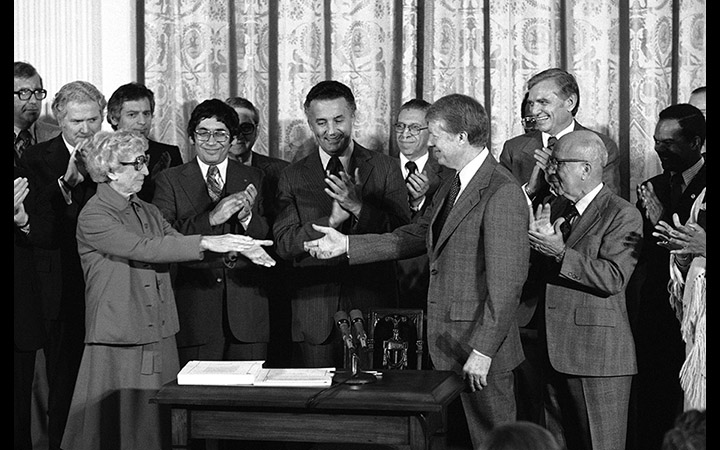 The Employment Act of 1946 stated that it is the responsibility of the federal government to create “conditions under which there will be afforded useful employment for those able, willing, and seeking work, and to promote maximum employment, production, and purchasing power.”1 In a 1976 hearing, Sen. Hubert Humphrey commented, “It is my judgment that that law has, from time to time, been conveniently ignored” (Meltzer 2010, 987). He wanted to adopt legislation that would enumerate more explicit employment goals, and if those goals were not met, to have the government provide jobs to achieve the target. Humphrey also wished to give the executive branch a greater role in the execution of monetary policy: The president would submit his recommendations for monetary policy, and the Federal Reserve Board of Governors would have to respond within fifteen days to explain any proposed deviation. Neither proposal passed, but Humphrey and his colleague in the House, Augustus Hawkins, continued to push for similar legislation. In 1977, the Federal Reserve Act was amended to instruct the Fed to pursue three goals: stable prices, maximum employment, and moderate long-term interest rates, though the last of those three objectives is rarely mentioned now in policy discussions and the Fed is widely viewed as having only a “dual mandate.”2

Humphrey died in January 1978, but later that year the Full Employment and Balanced Growth Act, better known as the Humphrey-Hawkins Act, amended the Employment Act of 1946 and was signed into law by President Carter. The Humphrey-Hawkins Act contained numerous objectives. Among them, unemployment should not exceed 3 percent for people 20 years or older, and inflation should be reduced to 3 percent or less, provided that its reduction would not interfere with the employment goal. And by 1988, the inflation rate should be zero, again provided that pursuing this goal would not interfere with the employment goal.3

Not long after the Humphrey-Hawkins Act was passed, the Federal Reserve came under scrutiny for ignoring one side of its dual mandate. Under the leadership of Chairman Paul Volcker, the Federal Reserve pursued an aggressive set of policies designed to reduce inflation. While those policies did bring inflation down from more than 13 percent in 1980 to roughly 3 percent in 1983, unemployment rose sharply during that period, from roughly 7 percent to more than 10 percent, the highest in the postwar period up to that point.

Volcker defended the Fed’s actions in 1981 testimony to the Senate Committee on Banking, Housing, and Urban Affairs:

I am wholly convinced — and I think I can speak for the whole Board and whole Open Market Committee — that recognizing that that objective for unemployment [4 percent] cannot be reached in the short run — the kinds of policies we are following offer the best prospect of returning the economy in time to a course where we can combine as full employment as we can get with price stability.

I bring in price stability because we will not be successful, in my opinion, in pursuing a full employment policy unless we take care of the inflation side of the equation while we are doing it. I think that philosophy is actually embodied in the Humphrey-Hawkins Act itself. I don’t think that we have the choice in current circumstances — the old tradeoff analysis — of buying full employment with a little more inflation.

We found out that doesn’t work, and we are in an economic situation in which we can’t achieve either of those objectives immediately. We have to work toward both of them; we have to deal with inflation. And the Federal Reserve has particular responsibilities in that connection. 4

Eventually, the Fed’s policies of steadfastly pursuing price stability did contribute to a favorable macroeconomic environment, with the economy growing and unemployment dropping sharply during the mid-to-late 1980s. Inflation remained relatively tame during this period as well, ranging from roughly 2 percent to 5 percent annually, with most years seeing an increase in prices of 3 percent to 4 percent, ushering in a period widely referred to as the Great Moderation. As a result of this apparent success, talk of the Fed’s responsibility to pursue its dual mandate largely dropped from public discourse until the mid-1990s, when some members of the Federal Open Market Committee (FOMC) wanted the Fed to consider adopting an explicit inflation target. Others expressed discomfort with the proposal, due, at least in part, to the belief that such a target would not give the Fed sufficient discretion to pursue its mandate of achieving maximum employment, or maximum sustainable employment, as some people had begun to refer to the Fed’s charge.

In particular, Vice Chairman Alan Blinder was opposed to such a change in Fed policy. At the January 31–February 1, 1995, meeting of the FOMC, he stated:

As usual, let me defend the status quo. We have a dual objective in the Federal Reserve Act now. I think it works very well. I think the case that it is broken and needs fixing is very thin. … There is no existing evidence — and I can’t say this too strongly — that having such targets leads to a superior trade-off. None at all. It is not one of those cases in which the evidence is equivocal. There is nothing that can be cited (Board of Governors of the Federal Reserve System 1995, 52).

While the idea that the Federal Reserve should pursue a “dual objective” — “dual mandate,” as Blinder and many in the media soon began to call it — had been around for decades, the term itself did not emerge in common parlance until 1995. Since then, its usage has become widespread among policymakers and journalists.

However, it was not until recently that the FOMC addressed employment explicitly in its policy statement. Instead, the FOMC preferred to mention sustainable economic growth and price stability. As Daniel L. Thornton of the Federal Reserve Bank of St. Louis has written:

… until the September 21, 2010, meeting, there was no reference to the objective of maximum employment elsewhere in the policy directive or in the FOMC’s statement. The September statement read, “Measures of underlying inflation are currently at levels somewhat below those the Committee judges most consistent, over the long run, with its mandate to promote maximum employment and price stability (Thornton 2011, 2).

Even more recently, the FOMC adopted an explicit inflation target. In January 2012 the FOMC stated:

The inflation rate over the longer run is primarily determined by monetary policy, and hence the Committee has the ability to specify a longer-run goal for inflation. The Committee judges that inflation at the rate of 2 percent, as measured by the annual change in the price index for personal consumption expenditures, is most consistent over the longer run with the Federal Reserve’s statutory mandate (Board of Governors of the Federal Reserve System 2012).

In that same statement, the FOMC noted the limits of monetary policy in achieving a specific unemployment rate:

The maximum level of employment is largely determined by nonmonetary factors that affect the structure and dynamics of the labor market. These factors may change over time and may not be directly measurable. Consequently, it would not be appropriate to specify a fixed goal for employment; rather, the Committee's policy decisions must be informed by assessments of the maximum level of employment, recognizing that such assessments are necessarily uncertain and subject to revision.

During its nearly 100-year history, the Federal Reserve has evolved considerably regarding both the scope of its duties and the actions it has taken to meet them. Prominent during most of its existence, though, has been the idea that it is responsible for both securing the purchasing power of the nation’s currency as well as promoting employment, which was formalized in the Employment Act of 1946 and then again in the Humphrey-Hawkins Act of 1978. As Chairman Ben Bernanke stated in a July 2013 speech, “In general, the Federal Reserve’s policy framework inherits many of the elements put in place during the Great Moderation. These features include the emphasis on preserving the Fed's inflation credibility, which is critical for anchoring inflation expectations, and a balanced approach in pursuing both parts of the Fed’s dual mandate in the medium term” (Bernanke 2013).

Bernanke, Ben S., “The First 100 Years of the Federal Reserve: The Policy Record, Lessons Learned, and Prospects for the Future,” Address at a conference sponsored by the National Bureau of Economic Research, Cambridge, MA, July 10, 2013.

Board of Governors of the Federal Reserve System. “FOMC Statement of Longer-Run Goals and Policy Strategy.” January 25, 2012.

Thornton, Daniel L. “What Does the Change in the FOMC’s Statement of Objectives Mean?” Federal Reserve Bank of St. Louis Economic Synopses no. 1 (2011).