Home > Federal Reserve History > Time Period: After the Accord > The Treasury-Fed Accord

In March 1951, the US Treasury and the Federal Reserve reached an agreement to separate government debt management from monetary policy, laying the foundation for the modern Fed. 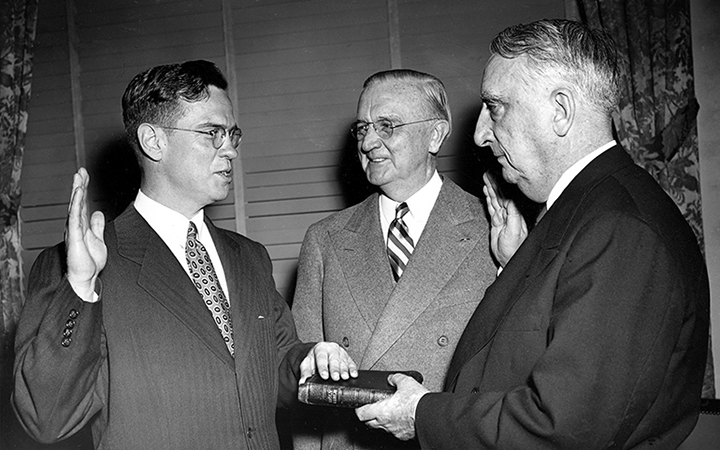 In April 1942, at the request of the Department of the Treasury, the Federal Reserve formally committed to maintaining a low interest-rate peg of 3/8 percent on short-term Treasury bills. The Fed also implicitly capped the rate on long-term Treasury bonds at 2.5 percent. The goal of the peg was to stabilize the securities market and allow the federal government to engage in cheaper debt financing of World War II, which the United States had entered in December 1941.

To maintain the peg, the Fed was forced to give up control of the size of its portfolio as well as the money stock. Simply put, the Fed maintained the low interest rate by buying large amounts of government securities, which also increased the money supply. Because the Fed was committed to a specific rate, it had to keep buying securities even if the members of the Federal Open Market Committee (FOMC) might have preferred a different monetary policy.

Marriner Eccles, Fed chairman at the time, favored financing the war via other means, such as tax increases coupled with wage and price controls. But ultimately, he and his colleagues on the FOMC concluded that winning the war was the most important goal, and that providing the government with cheap financing was the most effective way for the Fed to support that goal.2

After the war ended in 1945, most policymakers were concerned with preventing another Great Depression. But inflation proved to be a much greater concern: Between June 1946 and June 1947 Consumer Price Index (CPI) inflation was 17.6 percent, and from June 1947 to June 1948 it was 9.5 percent. The Fed's priority thus switched from financing the war to restricting inflation, but President Truman and Secretary of the Treasury John Snyder were both strong supporters of the low interest-rate peg in order to protect the value of war bonds.

The United States entered the Korean War in June 1950. With inflation on the rise, the FOMC felt strongly that the continuation of the peg would lead to excessive inflation. Throughout that year, the FOMC tried various tactics to raise short-term interest rates, but was successfully opposed by the Treasury.

By February 1951, CPI inflation had reached an annualized rate of 21 percent. As the Korean War intensified, the Fed faced the possibility of having to monetize a substantial issuance of new government debt, which would have placed even greater upward pressure on prices. But the administration continued to urge the Fed to maintain the peg, a position the FOMC found increasingly untenable.

The conflict came to a head when Truman invited the entire FOMC to a meeting at the White House. After the meeting, he issued a statement saying that the FOMC had “pledged its support to President Truman to maintain the stability of Government securities as long as the emergency lasts.” But in fact the FOMC had made no such pledge. With conflicting stories about the dispute appearing in the press, Eccles decided to release the FOMC’s own account of the meeting with the president--without consulting the rest of the committee (Marriner S. Eccles Document Collection 1951). As Eccles wrote in his memoir, “The fat was in the fire” ( Eccles 1951).

Shortly after that meeting, the Fed informed the Treasury that as of February 19, 1951, it would no longer “maintain the existing situation.” Needing to refund existing debt and possibly issue new debt, the Treasury knew it had to put an end to the uncertainty and public dispute. With Snyder in the hospital for cataract surgery, Assistant Secretary William McChesney Martin, Jr. met with Robert Rouse, Woodlief Thomas, and Winfield Riefler from the Fed. They negotiated a compromise under which the Fed would continue to support the price of five-year notes for a short time, but after that the bond market would be on its own.

On March 4, 1951, the Treasury and the Fed issued a statement saying they had “reached full accord with respect to debt management and monetary policies to be pursued in furthering their common purpose and to assure the successful financing of the government’s requirements and, at the same time, to minimize monetization of the public debt” (William McChesney Martin, Jr., Collection 1951).

At the time, it was not known how profound an effect that statement would have. But the accord marked the start of the development of a strong free market in government securities, which continues today. In addition, the debate over the consequences of interest rate pegging marked a shift in thinking at the Fed. Monetary policymakers began focusing actively on bank reserves and the control of money creation in order to stabilize the purchasing power of the dollar. But most important, by establishing the central bank’s independence from fiscal concerns, the accord set the stage for the development of modern monetary policy.