The Great Moderation from the mid-1980s to 2007 was a welcome period of relative calm after the volatility of the Great Inflation.1 Under the chairmanships of Volcker (ending in 1987), Greenspan (1987-2006) and Bernanke (starting in 2006), inflation was low and relatively stable, while the period contained the longest economic expansion since World War II. Looking back, economists may differ on what roles were played by the different factors in contributing to the Great Moderation, but one thing is sure: Better monetary policy was key. Unfortunately, the financial crisis of 2007-08 and the ensuing Great Recession broke the calm of the Great Moderation. An important question for Federal Reserve policymakers—and for other policymakers in the United States and worldwide—is whether the disruption beginning in 2007 was a temporary blip or reflects a shift to a more volatile economy going forward.

The significant decline in macroeconomic volatility that began in the mid-1980s and came to be known as the Great Moderation has been documented by many, including Stock and Watson (2003), Bernanke (2004), and Clark (2009). It was not simply a US phenomenon; it occurred around the same time in many other advanced economies. 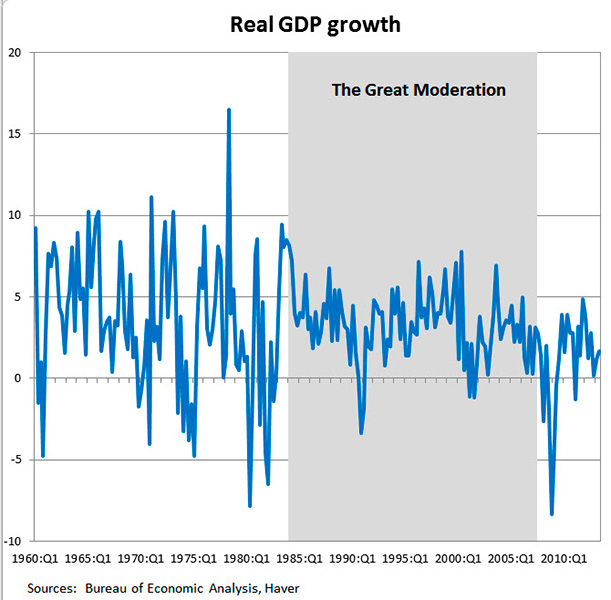 Chart 1 and Chart 2 visually illustrate the Great Moderation by showing real GDP growth and personal consumption expenditure inflation from 1960 to the present. While economists have reached no consensus on the period’s exact start and end dates, the chart dates the Great Moderation as between 1984 and mid-2007. The chart clearly shows the decline in volatility both in real GDP growth and in inflation.

What Caused the Great Moderation?

Reducing inflation and establishing basic price stability laid the foundation for the Great Moderation. But, in looking for deeper reasons, economists have generally proposed three reasons: changes in the structure of the economy, good luck, and good policy.

Changes in the structure of the economy can reduce volatility. For example, since manufacturing tends to be volatile, the shift that occurred from manufacturing to services would tend to reduce volatility. Another structural change would be the adoption of “just-in-time” inventory practices, which reduces the volatility of the inventory cycle. Similarly, advances in information technology and communications may have allowed firms to produce more efficiently and monitor their production processes more effectively, thereby reducing volatility in production—and thus in real GDP. Deregulation of many industries may have contributed to the increasing flexibility of the economy and thereby allow the economy to adjust more smoothly to shocks of various kinds, thus leading to its greater stability. Finally, more open international trade and capital flows may have helped make the economy more stable. 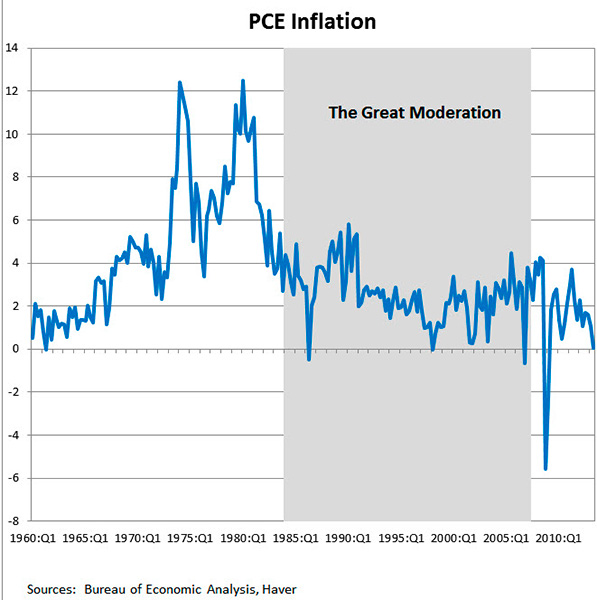 Good luck is another possible explanation. Perhaps the United States was simply lucky that shocks hitting the economy during the Great Moderation were smaller than the large, adverse shocks of the 1960s and 1970s. The powerful oil price shocks of that earlier period are the most obvious example. Economists who argue for the “good luck” story generally rely on estimating statistical models. For example, Stock and Watson (2003) consider the estimated residuals from their models as proxies for shocks to the economy and conclude that volatility declined due to good luck.

However, as Bank of England Deputy Governor Charles Bean pointed out in 2009, “shocks are not measured directly, only their consequences” (Bean 2009). In this view, rather than “good luck” or “smaller shocks,” it could be that structural changes and good policy had reduced the economy’s vulnerability to the shocks that occurred.

One bit of evidence supporting this assertion is the actual number of “large shocks” that did hit the US economy during the Great Moderation. Many of the event studies associated with this essay—the Latin American debt crisis of the 1980s, the failure of Continental Illinois Bank in 1984, the stock market crash of 1987, the Asian financial crisis in 1997, the collapse of Long-Term Capital Management in 1998, and the dot-com crash in 2000—suggest that the economy was hit by many large shocks during the time of the Great Moderation. These events, and others, lead us to wonder if the Great Moderation really was a period of “smaller shocks.”

While most explanations of the Great Moderation focus on these three factors, there is considerable disagreement on which explanation is the main reason. For example, Stock and Watson (2003) believe that “smaller shocks” are the key factor. However, as Federal Reserve Board Governor (but not yet chairman) Ben Bernanke noted in 2004, “each of the three classes of explanation I have described probably contains elements of truth… My view is that improvements in monetary policy, though certainly not the only factor, have probably been an important source of the Great Moderation” (Bernanke 2004).

What Role Did Monetary Policy Play in the Great Moderation?

During the Great Moderation, the Federal Reserve responded more systematically than it had before to deviations of inflation and output from their desired levels. The setting of policy turned out to be broadly consistent with what is known as a Taylor-type rule, named after the economist John B. Taylor, who first proposed his rule in 1993. Under this kind of rule, the central bank tightens monetary policy when output is above its potential or inflation is high relative to the policymaker’s desired inflation rate and eases policy when the circumstances are reversed. But importantly, the “Taylor Principle” dictates that the federal funds rate should be increased by more than an increase in inflation. In this way, monetary policy, as measured by the “real” federal funds rate, increases in response to an increase in inflation.

A more systematic monetary policy following the Taylor Principle means less policy instability, which should reduce macroeconomic volatility. Prior to the Great Moderation, monetary policy often followed what was called a “go-stop” policy. In general, monetary policy was eased to fight recessions during the “go-phase” and was tightened to combat rising inflation during the “stop-phase.” However, prior to the Great Moderation, the Fed would often maintain easy policy for too long leading to higher inflation. It would then tighten policy to fight rising inflation, but not for long enough. As a result, inflation generally rose in an erratic pattern during the 1960s and 1970s.2  By reducing the episodes of “go – stop” policies, a more systematic monetary policy reduces volatility.

Changes in the Federal Reserve’s approach to communicating about its monetary policy probably also contributed to the Great Moderation. Better communication and more transparency meant monetary policy could be more effective, for example, by better anchoring inflation expectations, which allows policy to have greater flexibility in responding to short-run developments. Asset prices would reflect the systematic part of policy, which also has a stabilizing influence. And there was less chance for the public and financial markets to be surprised by monetary policy actions. With fewer surprises, there was less cause for volatility. Before 1994, the Federal Reserve’s rate-setting Federal Open Market Committee (FOMC) had not announced its policy decisions: Changes had to be inferred by market participants from actions taken by the Open Market Desk of the New York Fed. But on February 4, 1994, the FOMC started issuing a brief statement announcing a decision to change policy. It has expanded that practice since, and it now issues a substantial statement following every FOMC meeting.

The FOMC also became more open in communicating about the likely future path of monetary policy. Beginning in February 2000, the FOMC provided assessments of risks facing the economy. It did so with relatively fixed language initially but used more flexible language later on. The new communications amounted to indirect guidance about the likely path of monetary policy. For example, when the FOMC says it sees a risk of higher inflation, markets conclude the FOMC may soon move toward tighter policy. The FOMC took another step toward more explicit guidance on August 12, 2003, when it said that policy accommodation can be maintained “for a considerable period.” Over the next few years, the Committee introduced new phrases, such as “patient,” and “measured,” to convey information about the likely future path of its policy. Starting in August 2011, after the Great Recession, the FOMC began to use date-based guidance by saying, for example, low interest rates were likely to continue “at least through mid-2013.” Longer-term guidance was provided by the FOMC in its “Statement of Longer-Run Goals and Monetary Policy Strategy,” which was first issued in January 2012 and gave a desired rate of 2 percent for inflation. Similar precision for the longer-run normal rate of unemployment is not feasible given its dependence on a multitude of nonmonetary factors that may evolve over time, but the Committee has noted its participants’ longer-run projections for the unemployment rate, as noted in its Survey of Economic Projections.3

More recently, the central bank began describing economic conditions that would warrant consideration of a change in the federal funds rate, going so far as to specify numerical thresholds for the unemployment rate and inflation that could lead authorities to consider tightening policy.4  The form that the FOMC’s communication and forward guidance takes depends on the circumstances. So, as circumstances change, so will the FOMC’s communication. For example, when the federal funds rate is constrained by the zero lower bound, the FOMC will necessarily need to communicate its intended policy differently than when the federal funds rate is not constrained by the zero lower bound and more fully reflects the Committee’s intended policy.5

Monetary policy also contributed to the Great Moderation through its attention to financial stability. For example, on the day after the October 19, 1987, stock market crash, the Federal Reserve issued the following short statement: “The Federal Reserve, consistent with its responsibilities as the Nation’s central bank, affirmed today its readiness to serve as a source of liquidity to support the economic and financial system.” The Federal Reserve also quickly responded to the September 11 terrorist attacks by providing liquidity through the discount window and extending credit through its check clearing role (Neely 2002). In both cases, the Federal Reserve’s action provided important liquidity to keep markets functioning and prevent an even worse crisis. However, as Chairman Bernanke recently noted, “for the most part, financial stability did not figure prominently in monetary policy discussions during these years [of the Great Moderation]” (Bernanke 2013).

Has the “Great Moderation” Ended?

Bean, Charles, “The Great Moderation, the Great Panic and the Great Contraction,” Schumpeter Lecture at the Annual Congress of the European Economic Association, Barcelona, Spain, August 25, 2009.

Bernanke, Ben S., “A Century of U.S. Central Banking: Goals, Frameworks, Accountability,” Remarks at “The First 100 Years of the Federal Reserve: The Policy Record, Lessons Learned, and Prospects for the Future,” a conference sponsored by the National Bureau of Economic Research, Cambridge, MA, July 10, 2013.