A financial crisis started in Thailand in July 1997 and spread across East Asia, wreaking havoc on economies in the region and leading to spillover effects in Latin America and Eastern Europe in 1998. 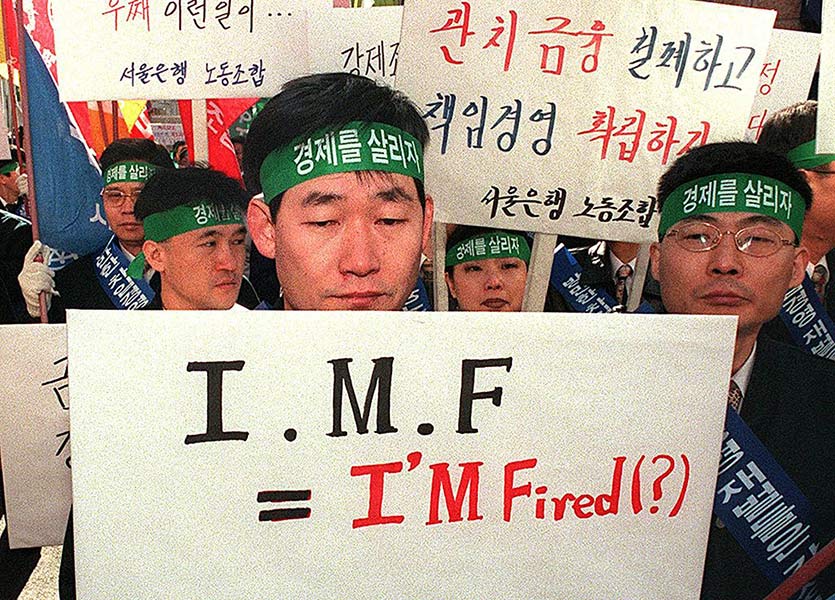 On July 2, 1997, Thailand devalued its currency relative to the U.S. dollar. This development, which followed months of speculative pressures that had substantially depleted Thailand’s official foreign exchange reserves, marked the beginning of a deep financial crisis across much of East Asia. In subsequent months, Thailand’s currency, equity, and property markets weakened further as its difficulties evolved into a twin balance-of-payments and banking crisis. Malaysia, the Philippines, and Indonesia also allowed their currencies to weaken substantially in the face of market pressures, with Indonesia gradually falling into a multifaceted financial and political crisis. Hong Kong faced several large but unsuccessful speculative attacks on its currency peg to the dollar, the first of which triggered short-term stock market sell-offs across the globe.  And severe balance-of-payments pressures in South Korea brought the country to the brink of default.

The events that came to be known as the Asian Financial Crisis generally caught market participants and policymakers by surprise. While some vulnerabilities were well recognized before the crisis erupted, especially in Thailand, these countries’ economies were also viewed as having many strengths. Indeed, the most affected economies were among the world’s most successful in the decade heading into the crisis.  Business-friendly policies and cautious fiscal and monetary management had translated into high rates of savings and investment, supporting GDP growth rates exceeding 5 percent and often approaching 10 percent.

However, as the crisis unfolded, it became clear that the strong growth record of these economies had masked important vulnerabilities. In particular, years of rapid domestic credit growth and inadequate supervisory oversight had resulted in a significant build-up of financial leverage and doubtful loans. Overheating domestic economies and real estate markets added to the risks and led to increased reliance on foreign savings, reflected in mounting current account deficits and a build-up in external debt. Heavy foreign borrowing, often at short maturities, also exposed corporations and banks to significant exchange rate and funding risks—risks that had been masked by longstanding currency pegs. When the pegs proved unsustainable, firms saw sharp increases in the local currency value of their external debts, leading many into distress and even insolvency.

A Bangkok, Thailand, shop offers 50% off in a desperate attempt to lure customers who have lost their spending power after the economic crash of 1997. (Photo: Peter Charlesworth/Light Rocket/Getty Images)

The unfolding crisis in Thailand illustrated how problems in the banking sector could lead to a pullback by foreign investors, setting off a spiral of depreciation, recession, and amplified banking sector weakness.  The result was contagion, with foreign creditors pulling back from other countries in the region seen as having similar vulnerabilities. Japan’s deteriorating economic and financial situation also played a role, with Japanese banks—formerly an important source of credit—pulling back from lending activity in the region. In the face of these pressures, foreign exchange intervention often proved counterproductive, with some countries depleting the bulk of their official reserves and suffering even larger subsequent depreciations.

In response to the spreading crisis, the international community mobilized large loans totaling $118 billion for Thailand, Indonesia, and South Korea, and took other actions to stabilize the most affected countries. Financial support came from the International Monetary Fund, the World Bank, the Asian Development Bank, and governments in the Asia-Pacific region, Europe, and the United States. The basic strategy was to help the crisis countries rebuild official reserve cushions, and buy time for policy adjustments to restore confidence and stabilize economies, while also minimizing lasting disruption to countries’ relations with their external creditors.

To address the structural weaknesses exposed by the crisis, aid was contingent on substantial domestic policy reforms. The mix of policies varied by country, but generally included measures to deleverage, clean up and strengthen weak financial systems, and to improve the competitiveness and flexibility of their economies. On the macro side, countries hiked interest rates to help stabilize currencies and tightened fiscal policy to speed external adjustment and cover the cost of bank clean-ups. However, over time, as markets began to stabilize, the macro policy mix evolved to include some loosening of fiscal and interest rate policy to support growth.

The Federal Reserve played an active role in informing and supporting the U.S. and global policy responses. Behind the scenes, the Federal Reserve provided timely analysis of the underlying adjustment challenges and closely monitored the risks the crisis posed to U.S. banks, and the condition and funding profiles of Asian bank offices in the United States, coordinating policy with other bank supervisors in the United States and internationally. The Fed also acted as an agent for the U.S. Treasury, including by helping arrange a bridge loan for Thailand in the early stages of the crisis.

Perhaps most visibly, the Federal Reserve played a catalytic role in an official sector effort to encourage banks to act in their collective self interest in helping South Korea avoid a disorderly default.  Following a meeting on December 24, 1997, hosted by the Federal Reserve Bank of New York, U.S. banks with the largest exposures to South Korean banks voluntarily committed to roll over their short-term loans, and to work with South Korean authorities to restructure them into medium-term loans. Similar meetings and other forms of outreach took place in other G-10 countries. In the ensuing months, the Federal Reserve and other central banks oversaw banks’ cooperation with their rollover commitments, pending completion of the restructuring in April 1998.

The combination of strong policy measures by the affected countries and external support from the international community ultimately contained the crisis and set the stage for a subsequent strong recovery.

For the United States, the adverse direct trade impact resulting from the Asian crisis proved manageable, and was partly offset by some other more positive spillovers, including reduced inflation pressures (from cheaper Asian imports and weaker global commodity prices) and lower bond yields (from a flight to dollar assets). The adverse fallout for some other countries was more substantial. In particular, a number of emerging market economies in Latin America and Eastern Europe, including Brazil and Russia, faced significant balance-of-payments pressures in 1998, reflecting spillovers from the Asia crisis as well as home grown vulnerabilities, some of which were quite different from those at the heart of Asia’s crisis.

Board of Governors of the Federal Reserve System. “FOMC: Transcripts and Other Historical Materials, 1997.” Last updated August 2, 2013, http://www.federalreserve.gov/monetarypolicy/fomchistorical1997.htm.

Board of Governors of the Federal Reserve System. “FOMC: Transcripts and Other Historical Materials, 1998.” Last updated August 2, 2013, http://www.federalreserve.gov/monetarypolicy/fomchistorical1998.htm.

Blustein, Paul. The Chastening: Inside the Crisis that Rocked the Global Financial System and Humbled the IMF. New York: PublicAffairs, 2001.