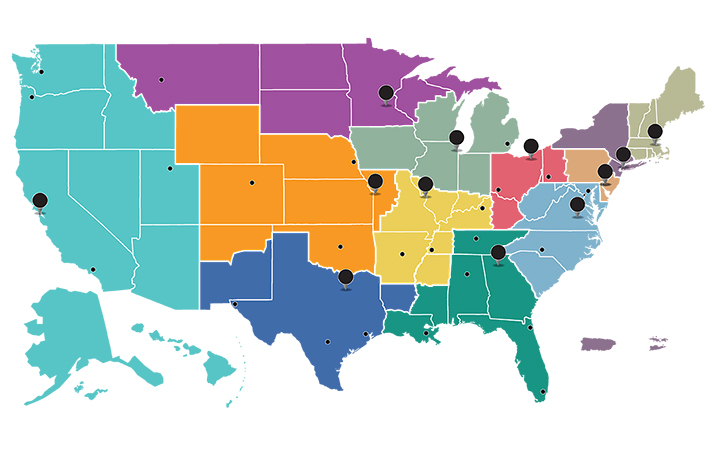 What Are the Federal Reserve Banks?

The Reserve Banks are decentralized by design and are located in Boston, New York, Philadelphia, Cleveland, Richmond, Atlanta, Chicago, St. Louis, Minneapolis, Kansas City, Dallas, and San Francisco. This structure ensures that the reserves and decisions of the Fed are distributed across the country and that the conditions of communities from every part of the nation are considered when the Fed sets monetary policy.

Each Reserve Bank operates within its own geographic area of the United States, known as Federal Reserve Districts. The Banks and their 24 Branches serve banks, the U.S. Treasury, and the public.

What Do the Federal Reserve Banks Do?

Supervision and Examination of Member Banks

The Reserve Banks monitor for financial risk and supervise bank and financial holding companies (companies that own banks and other financial institutions) as well as state-chartered banks that are members of the Federal Reserve System to ensure soundness, stability, and compliance in the financial system. With a stable system, financial institutions and markets can provide households, businesses, and communities access to the resources they need.

Federal Reserve Banks examine banks to ensure and enforce compliance with consumer protection and fair lending laws and promote local community development to ensure that they responsibly meet the financial needs of their communities.

The Federal Reserve Banks provide key financial services to the nation’s payment system including distributing the nation’s cash and coin to banks and clearing checks.

Currency and coin are placed into or are withdrawn from circulation in response to changes in the public's need for cash. Reserve Banks process cash daily to ensure that currency is clean and in good condition. Almost all U.S. currency now consists of Federal Reserve notes, which were first issued in 1914.

Federal Reserve Banks also provide check collection and processing services to banks and other financial institutions. Due to the rise of electronic payment instruments, nearly all checks processed by the Reserve Banks are electronic. In early 2010, paper check processing was reduced to one location, down from 45 locations in 2003.

In addition, Federal Reserve Banks provide services to banks such as loans, currency and coin storage, and safekeeping services. The Reserve Banks finance their operations through providing these services as well as interest on government securities. Excess earnings are transferred to the U.S. Treasury.

Support for the U.S. Treasury

Economists and employees in each District provide expert knowledge about their local economies. That information (presented in a publication known as the "Beige Book") is used to prepare Bank presidents for FOMC meetings and monetary policy decisions and factors into decisions made by the Board of Governors.4

Reserve Banks also promote economic well-being in their District and distribute information about the economy to the public through publications, speeches, educational resources, research, and more.

How Have Federal Reserve Banks Changed Over Time?

Like the first and second central banks of the United States, the original charter of the twelve Banks was set to expire in 1934, twenty years after they opened. Congress not only rechartered the Federal Reserve Banks seven years early, but it also rechartered them into perpetuity.

In the late 1910s and early 1920s, several Reserve Banks opened Branch offices in their Districts to help handle payment systems like clearing checks and distributing cash. Some cities that had originally appealed the decision of the RBOC in an effort to get the Banks moved later became Branch locations for their Reserve Bank District.

More restructuring came in 1977 when the Federal Reserve Reform Act was enacted to increase the Fed’s transparency and accountability to Congress, clarify the Federal Reserve’s objectives and change the selection criteria for Reserve Bank directors. These changes were made to increase accountability during the 1970s, a period marked by “stagflation,” a moniker for high inflation and unemployment.

Also enacted in 1977, the Community Reinvestment Act encouraged banks to better serve low- and moderate-income (LMI) communities. Because of such legislation, banks now receive public CRA ratings from federal banking regulators, including the Federal Reserve, which evaluate the extent to which banks meet the credit needs of LMI neighborhoods.

Three years later, in 1980, the Depository Institutions Deregulation and Monetary Control Act was signed into law. This important law deregulated institutions that accept deposits and sought to improve the Federal Reserve’s control over monetary policy. Previously, depository institutions suffered a disadvantage as control over interest rates on deposits were limited by laws from the Great Depression. In addition, the Federal Reserve began charging member banks for services it provided, including currency storage and check clearing and collection.

Motivated by the Great Recession, the Dodd-Frank Act was passed in 2010 and imposes stricter supervision and orderly liquidation of banks and other institutions to protect consumers. Additionally, the Office of Minority & Women Inclusion was established and tasked with all matters relating to diversity in management, employment, and business activities.

Today, the Federal Reserve Banks are better equipped to pursue their mission of promoting financial stability and serving the public through providing many vital services to the economy.