The twelve locations of the decentralized component of the Federal Reserve System opened for business on November 16, 1914, just seven months after the locations were selected. 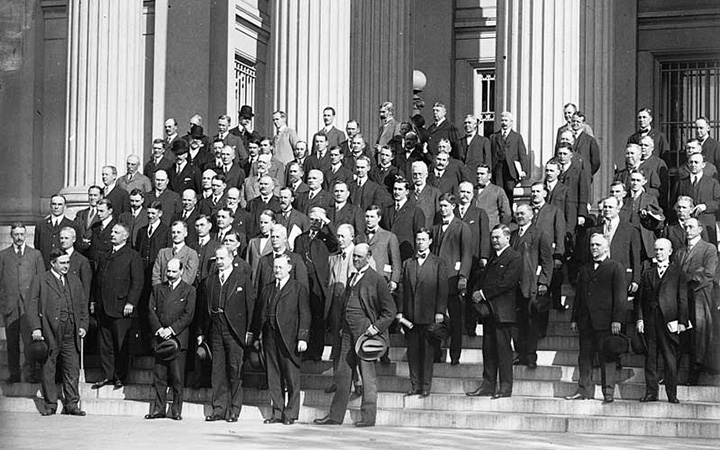 “The opening of these banks marks a new era in the history of business and finance in this country. It is believed that they will put an end to the annual anxiety from which the country has suffered for the past generation about insufficient money and credit to move the crops each year, and will give such stability to the banking business that the extreme fluctuations in interest rates and available credits which have characterized banking in the past will be destroyed permanently.”

Some seven months after the Reserve Bank Organization Committee announced which cities and districts were selected, all twelve Reserve Banks opened on the same day, Monday, November 16, 1914. There was a sense of urgency to open the Reserve Banks, as World War I was affecting commerce and banking, but there were many organizational hurdles to overcome.

The Federal Reserve Act specified that each Reserve Bank would have a governor to oversee the day-to-day operations of the Bank (the Banking Act of 1935 changed the titles of chief executive officers of Federal Reserve Banks to president). The Reserve Banks were also staffed with bankers; clerks, including a cashier, an auditor, a bookkeeper, a credit manager, and a discount clerk; some currency handlers; as well as support staff, such as stenographers and messengers. On opening day, some Reserve Banks had as few as eight employees (Minneapolis), though most had around twenty. The largest Reserve Banks, located in Chicago and New York, had forty-one and eighty-five employees, respectively, on opening day.

Organizing, staffing, furnishing office equipment, and even finding a building to operate out of had to happen very quickly for most Reserve Banks in order to open on November 16, 1914. In Atlanta, the bank’s first location was chosen just sixteen days before opening. Some districts had to arrange temporary offices in established banks, as in Minneapolis, where Reserve Bank staff first operated out of the board room and teller cages of the Minnesota Loan & Trust Company. Treasury Secretary McAdoo instructed the Reserve Banks, “Buy a few chairs and pine-top tables. Hire some clerks and stenographers, paint ‘Federal Reserve Bank’ on your office door and open up. The way to begin is to begin. When you make a start, everything will be smoothed out by practice.”

Fisher, Richard. “Vignettes of Dallas Fed History on the Eve of Our Centennial.” Remarks before the Dallas Historical Society, Dallas, Texas, June 26, 2012.