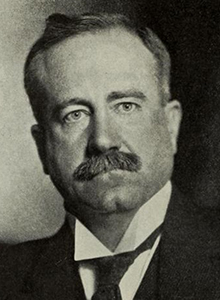 Williams was born in Powhatan County, Virginia, in 1865. After receiving his education at the University of Virginia, he became a railroad executive and then an increasingly influential banker.1 In April 1913, President Woodrow Wilson appointed him to the office of first assistant secretary of the Treasury. One of his first acts was to order the segregation of work areas at the Bureau of Engraving and Printing, part of the Treasury under his authority.*2

In January 1914, President Wilson named Williams the comptroller of the currency, and he took office February 2.3 On August 10, 1914, Williams became an ex officio member of the new Federal Reserve Board, where he served along with Secretary of the Treasury William McAdoo and the five newly appointed Board members. Williams served as comptroller for the entirety of World War I. As comptroller, Williams was aggressive in his oversight of the banking industry and was often at odds with the Fed.4

Williams was reappointed by President Wilson in 1919. His nomination was strongly opposed by House Banking committee chairman Louis McFadden5 (who would later sponsor the McFadden Act) among others. Hearings on the nomination lasted nearly a month6 and included an investigation of Williams's involvement in the Office of the Comptroller's 1915 legal case against Riggs National Bank.7 Despite controversy, his renomination was approved.

During the recession of 1920-1921, Williams recommended specific discount window policies for the Federal Reserve Banks but the Banks did not act on his advice.8 He resigned as comptroller on March 2, 1921. After leaving public service, he went on to be an outspoken critic of the Federal Reserve.9 His charges that the Federal Reserve had deliberately created deflation to hurt the interests of farmers and small banks led to the formation of a congressional joint committee to investigate the matter.10

* To our readers: This website provides information about individuals who played important roles in Federal Reserve history, some of whom embraced, advocated, or advanced public policies that are wholly inconsistent with our values. This profile and others on this website acknowledge these problematic views and actions. The Federal Reserve History website is committed to transparency in documenting the stories that Fed history reveals and doing so in a manner that is consistent with the Federal Reserve’s commitment to education, diversity, equity, and inclusion.

Written by the Board of Governors of the Federal Reserve System. Updated September 2021 by Genevieve Podleski. See disclaimer.

4 Robertson, Ross M. The Comptroller and Bank Supervision: a Historical Appraisal. Office of the Comptroller of the Currency, 1968, p. 113.