The Reserve Bank Organization Committee soon began surveying commercial banks about their preferences for the location of Federal Reserve Banks. It also evaluated proposals from thirty-seven cities seeking Federal Reserve Banks, and held public hearings in eighteen cities. On April 2, 1914, the Committee announced that twelve Federal Reserve districts would be formed, identified the boundaries of those districts, and named the cities that would have Reserve Banks.1  The Banks were quickly organized, officers and staff were hired, and boards of directors appointed. The Banks opened for business on November 16, 1914.

Congress’s objective in establishing the Federal Reserve System was monetary and financial stability. They sought to create a monetary system that could respond effectively to stresses in the banking system. Banking panics had occurred every few years during the nineteenth and early twentieth centuries. Panics were marked by depositor runs, suspensions of payments to depositors, sharp spikes in interest rates, and sometimes serious economic recessions. Panics were widely attributed to the nation’s “inelastic” currency, the concentration of bank reserves in New York City and other major financial centers, and investment of those reserves in short-term loans to stock market speculators.2  The Federal Reserve Act addressed these perceived shortcomings by creating a new national currency—Federal Reserve notes—and requiring members of the Federal Reserve System to hold reserve balances with their local Federal Reserve Banks.

All national banks, i.e., those with federally issued charters, were required to become members of their local Reserve Bank. State-chartered banks were also eligible for membership if they met certain criteria. State members became subject to federal banking regulations and supervision, however, which in many cases were more strict than state regulations and oversight. Consequently, few state banks joined the Federal Reserve System in the early years.

Federal Reserve Banks provided various financial services, such as check clearing and collection, for their members. Perhaps the most important benefit of becoming a member of the Federal Reserve System was access to the Fed’s “discount window.” Member banks could obtain additional reserves or Federal Reserve notes by “rediscounting” short-term commercial and agricultural paper (bank loans) with their Reserve Bank.3  The Fed’s founders expected that the ability of member banks to rediscount eligible paper at the Fed’s discount window would provide the flexibility or “elasticity” to the nation’s money supply needed to end the problem of banking panics. Moreover, by restricting the types of paper eligible for rediscounting with the Fed, the System’s founders sought to distance the banking and monetary system from the financing of speculative activities, which they believed contributed to financial instability. However, these restrictions may have made the Fed less effective as lender of last resort for the banking system. For example, during the Great Depression, many member banks could not borrow from the Federal Reserve because they had little paper that was eligible for rediscounting. The Fed may have also been less effective as lender of last resort than the founders had intended because so many state banks remained outside the Federal Reserve System and therefore did not have access to the Fed’s discount window.4

The paramount goal of the Fed’s founders was to eliminate banking panics, but it was not the only goal. The founders also sought to increase the amount of international trade financed by US banks and to expand the use of the dollar internationally. By 1913 the United States had the world’s largest economy, but only a small fraction of US exports and imports were financed by American banks. Instead, most exports and imports were financed by bankers’ acceptances drawn on European banks in foreign currencies. (Bankers’ acceptances are a type of financial contract used for making payments in the future, for example, upon delivery of goods or services. Bankers’ acceptances are drawn on and guaranteed, i.e., “accepted,” by a bank.) The Federal Reserve Act allowed national banks to issue bankers’ acceptances and open foreign branches, which greatly expanded their ability to finance international transactions (Eichengreen 2011, pp.25-26; Broz 1997). Further, the Act authorized the Reserve Banks to purchase acceptances in the open market to ensure a liquid market for them, thereby spurring growth of that market.

World War I began in Europe in August 1914, before the Federal Reserve Banks had opened for business. The war had a profound impact on the US banking system and economy, as well as on the Federal Reserve. The start of the war triggered a brief financial panic and a gold outflow from the United States. US exports began to rise within a few months, however, and gold began to pour into US banks. The Fed lacked the resources to offset the gold inflow; consequently, the nation’s money stock rose and inflation followed.

War disrupted European financial markets and reduced the supply of trade credit offered by European banks, providing US banks with an opening. Low US interest rates, abundant reserves, and new authority to issue trade acceptances enabled American banks to finance a growing share of world trade. By the second half of the 1920s, over half of US imports and exports were financed by dollar-denominated acceptances, as was a large share of the international trade of other countries (Eichengreen 2011, p.30). The strength of the US economy and the greater use of the dollar for making international payments made the dollar the world’s leading reserve currency; by the mid-1920s, foreign governments and central banks held more of their foreign-exchange reserves in dollars than in any other currency (Eichengreen 2011, p.32).

When the United States entered World War I in 1917, the Federal Reserve played a major role in helping to finance the war effort. The Fed assisted in selling government securities to banks and the public, with Reserve Bank governors serving as chairmen of committees in each Federal Reserve district to sell Liberty bonds to the public (Meltzer 2003, p.85).5  Further, the Reserve Banks encouraged their member banks to purchase Treasury securities by establishing preferential discount rates on loans secured by government notes and bonds (Meltzer 2003, pp.85-86).

The United States emerged from World War I with the world’s strongest and most vibrant economy. The Federal Reserve Banks held substantial gold reserves and discount loans to their member banks. A modest gold outflow and rising inflation prompted the Fed to increase its discount rate sharply in 1920. The price level then began to fall and the US economy entered a recession. The recession was relatively short, however, and the US economy grew at a moderately high and stable rate, with low inflation, over the remainder of the decade.

In their classic book, A Monetary History of the United States, Milton Friedman and Anna J. Schwartz (1963) attribute the good performance of the US economy in the 1920s to enlightened Federal Reserve policy. Under the leadership of Federal Reserve Bank of New York Governor Benjamin Strong, Friedman and Schwartz write, the Federal Reserve developed its first macroeconomic stabilization policy aimed at moderating the business cycle and maintaining price stability. Strong was also an ardent proponent of the international gold standard, which he viewed as fundamental to economic and financial stability. Throughout the decade, Strong worked closely with governors of foreign central banks to promote and expand the international gold standard.6 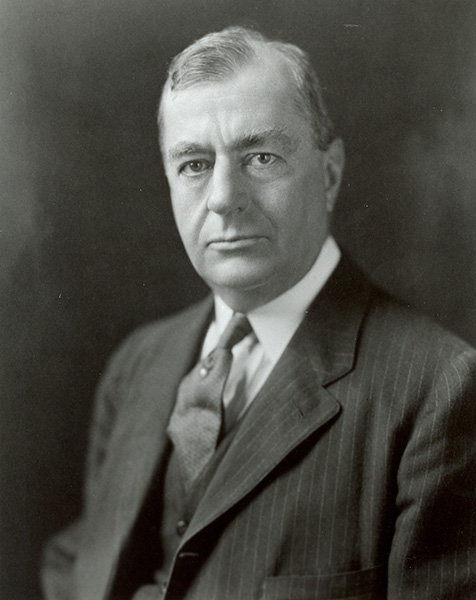 The Fed’s founders had not conceived of monetary policy in the modern sense. Although each Reserve Bank set a discount rate, subject to Federal Reserve Board approval, Federal Reserve credit was supplied at the initiative of member banks when they came to the discount window to borrow reserves or obtain currency. The Federal Reserve Act did permit Reserve Banks to purchase (and sell) government securities in the open market, however; by the early 1920s, Strong and other Fed officials had discovered that these operations influenced market interest rates and credit conditions. The Reserve Bank governors began to informally coordinate their operations in government securities. In 1923 the Open Market Investment Committee was established, with Strong as chair, to determine open-market operations for the System. The Fed then began to use open-market operations proactively to achieve broad economic objectives—that is, to conduct monetary policy.7

The Federal Reserve made substantial open-market purchases in both 1924 and 1927. By lowering US interest rates, the purchases both promoted recovery from recessions in the United States and supported the international gold standard. However, in 1928 the Fed’s focus turned toward the booming US stock market. Officials debated what, if any, steps they could take to ensure Federal Reserve credit was not used to fuel financial speculation. The Fed sold government securities and increased Reserve Bank discount rates. In early 1929 the Federal Reserve Board issued new guidelines intended to prohibit banks that made stock market loans from borrowing at their Federal Reserve Banks. The extent to which tighter monetary policy ended the economic expansion of the 1920s and ushered in the Great Depression is still debated. However, disagreements and sharp divisions arose within the Federal Reserve System over how to respond to financial speculation and in general how to use open-market purchases to stimulate economic activity. This strife hampered the Fed’s responsiveness to the subsequent financial instability and economic contraction in the Great Depression.