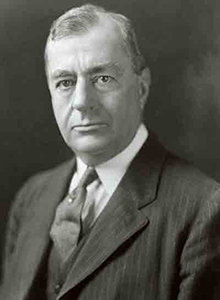 Benjamin Strong Jr. was elected president (then called governor) of the Federal Reserve Bank of New York at its first board of directors’ meeting on October 5, 1914. He was forty-one at the time, and serving as president of Bankers Trust Company of New York.

Born in 1872 in Fishkill-on-Hudson, New York, Strong entered the banking industry after he graduated from public high school. He quickly embarked on his financial career by joining Jesup, Paton and Company as a clerk. In 1891, he joined Cuyler, Morgan and Company, an investment and financial management firm. He later became assistant secretary of Atlantic Trust Company, and following several mergers, he was named secretary of Bankers Trust Company in 1904; vice president in 1909; and president in 1914. During his fourteen years in office as the first president of the New York Fed, Strong’s knowledge of the banking history of the United States, coupled with his intense interest in international affairs, made him a dominant force in U.S. monetary and banking affairs.

Strong was instrumental in the efforts to provide American financial support to the Allies through the Liberty Loan campaigns held in the Second Federal Reserve District, as the United States entered into World War I after 1917. After the close of the Great War, Strong advocated a loose monetary policy to alleviate the effects of recession.

Throughout the 1920s, Strong promoted more effective cooperation among the world’s central banks, and he traveled extensively to carry out this objective. At the conclusion of World War I, he recognized that world trade and the trade of the United States could not be restored to normal levels until the currencies of the major economies of the world were stabilized. He was deeply concerned with the rehabilitation of the finances of the European countries, giving them invaluable assistance in their efforts to return to a gold basis. His advice was sought in the formulation of many important matters affecting world finance.

Strong died in 1928 while still leading the New York Fed. He left both a moral and monetary legacy to the people of the Bank. He bequeathed in his will that it was his "sincere desire that said legacy shall be used at the discretion of the officers of [the Bank] for the benefit of the [Federal Reserve] Club organized and maintained by the clerks of the Bank." 1  The fund is used to this day to assist employees in monetary need. 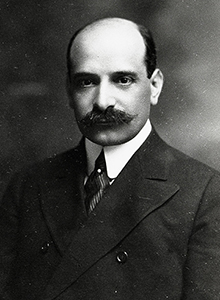