The banking panics in 1930 and early 1931 were regional in nature. The nature of the financial crisis changed in the fall of 1931, when the commercial banking crisis spread throughout the entire nation.

On September 21, 1931, Great Britain left the gold standard—that is, withdrew its promise to provide a specific amount of gold in exchange for its bank notes (Wicker 1996). Foreigners became concerned the United States would do the same and began converting their dollar assets to gold. This external drain caused a large reduction in the US gold supply. At the same time, depositors became concerned about the safety of banks and withdrew currency from their accounts, creating an internal drain on the banking system (Friedman and Schwartz 1963). Together, these external and internal drains reduced the money supply, deepening the deflation which propagated the depression.

The Federal Reserve Bank of New York responded to the external drain in the gold stock by raising its discount rate and acceptance buying rate in early October (Friedman and Schwartz 1963). The goal was to encourage investors to deposit money in the United States by providing a relatively higher relative yield on US financial assets (Wheelock 1992). According to Friedman and Schwartz, the internal drain wouldn’t have been so severe if the Fed had increased open market purchases as well.

Although the external drain on the US gold stock ended by late October, bank failures continued. To try to relieve the strain in the banking system, in January 1932, the US Congress created the Reconstruction Finance Corporation (RFC), which had the authority to lend to banks, other financial institutions, and railroads. In addition, the Fed began a program of large-scale open market purchases in April 1932; by the time the program had ended in August, the Fed had purchased about $1 billion in government securities. During the first half of 1932, the bank failure epidemic ended (Friedman and Schwartz 1963).

Economic conditions improved by the summer of 1932, but relief did not last. The Midwest and West, especially, saw an increase in bank failures toward the end of 1932; in early 1933, a national panic arose. Many factors contributed to the national banking panic, including uncertainty over the economic policies of President Roosevelt, who was elected in November 1932 but did not take office until March 1933. Banks could have borrowed from the RFC but were reluctant to do so, in part because their names would be published and their action might be seen as a sign of weakness, which might then lead to a run on the bank (Friedman and Schwartz 1963).

A bank run on individual banks in a given state threatened other banks in that state. For this reason, states began declaring state banking holidays (Nevada was first, on October 31, 1932), which temporarily relieved banks of meeting their debt obligations. The spread of these statewide banking holidays increased the demand for currency in other states, with New York City banks feeling the most pressure. The Fed and commercial banks once again were concerned about a potential external drain of the US gold stock. During this period, fears that Roosevelt would devalue the currency led private banks and others with dollar assets to accumulate foreign currencies (Friedman and Schwartz 1963). According to Wicker, following Michigan’s banking holiday, which was declared on February 14 after troubled Detroit banks were unable to secure loans from the RFC, the drain on gold reserves accelerated. (For additional information, see the Federal Reserve Board’s annual report for 1933.) 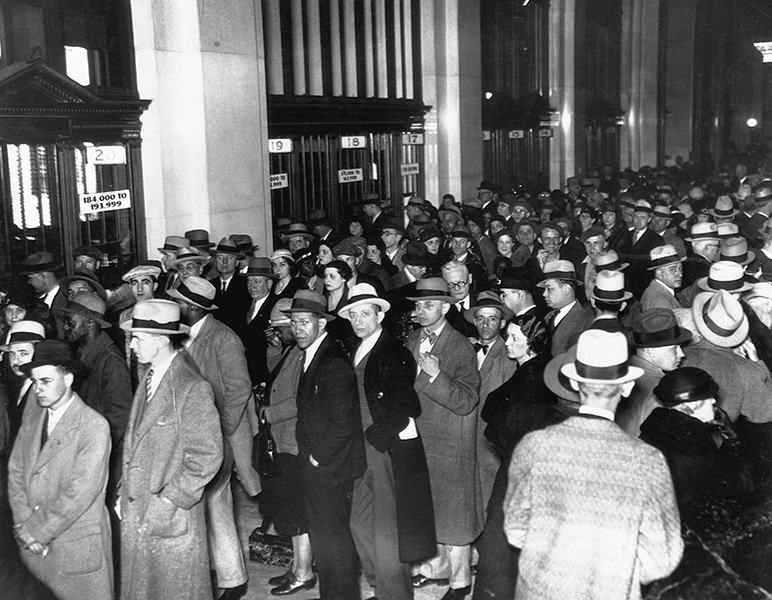 The Fed again raised discount rates and acceptance buying rates in February 1933, as it had during the fall of 1931, to help slow the drain on gold reserves. Interest rates rose across the board. But once again, the Fed did not increase its open market purchases significantly (Friedman and Schwartz 1963). In response to the large gold losses in New York, the Chicago Fed provided loans to the New York Fed on March 1 and 2, but refused the New York Fed’s request for another loan on March 3 out of concern for its own reserve ratio. The Federal Reserve Board then suspended the gold reserve requirement on March 3 (Wicker 1996). Rather than containing the panic, “The System itself shared in the panic that prevailed in New York” (Friedman and Schwartz 1963, 327), and even the Federal Reserve Banks were closed on March 4. The crisis ended when Roosevelt declared a national bank holiday beginning March 6, 1933, and announced the suspension of gold shipments (Wheelock 1992).

According to Friedman and Schwartz, the Federal Reserve System as a whole had no policy in place in the two months leading up to the national banking holiday. Likewise, Wicker noted that the lack of agreement among the twelve Reserve Bank governors on a strategy (that is, more vigorous open market purchases) contributed to the need to suspend payments. Wicker also suggested that, rather than the RFC having lender-of-last-resort responsibilities, the Fed could have provided support to troubled banks whose failure would cause fear and uncertainty to spread (as was the case in Detroit).

Acknowledging lessons learned from the 1930s, the Fed responded differently to the recent financial crisis. For instance, the Fed invoked its lender-of-last-resort responsibilities and provided extensive liquidity to the banking system—for example, through discount window lending (Bernanke 2010). The Fed also provided liquidity to other critical institutions through emergency lending programs. Chairman Bernanke sums up the different responses in the following quote:

“Unlike in the 1930s, when policy was largely passive and political divisions made international economic and financial cooperation difficult, during the past year monetary, fiscal, and financial policies around the world have been aggressive and complementary. Without these speedy and forceful actions, last October’s panic would likely have continued to intensify, more major financial firms would have failed, and the entire global financial system would have been at serious risk.”

Bernanke, Ben S., “Implications of the Financial Crisis for Economics,” Speech delivered at the Conference co-sponsored by the Center for Economic Policy Studies and the Bendheim Center for Finance, Princeton University in Princeton, NJ, September 24, 2010.