Like its 1973–74 predecessor, the second oil shock of the 1970s was associated with events in the Middle East. 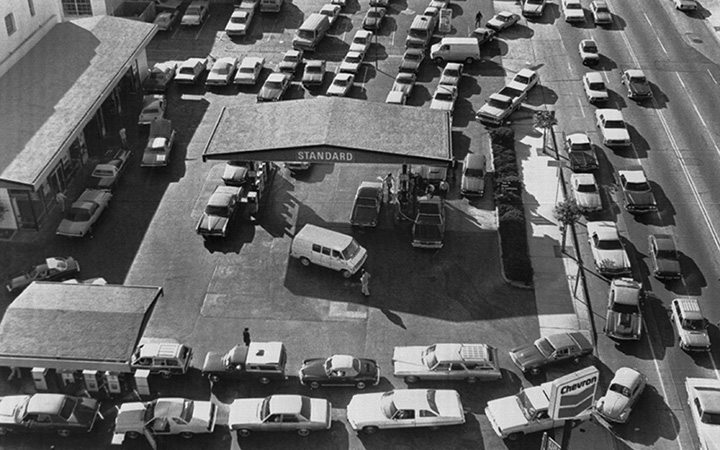 May 9, 1979: Cars line up outside a filling station on the first day of gas rationing imposed on nine California counties following the revolution in Iran that caused a shortage of crude oil. (Bettmann/Bettmann/Getty Images)
by Laurel Graefe, Federal Reserve Bank of Atlanta

Like its 1973–74 predecessor, the second oil shock of the 1970s was associated with events in the Middle East, but it was also driven by strong global oil demand. The Iranian Revolution began in early 1978 and ended a year later, when the royal reign of Shah Mohammad Reza Pahlavi collapsed and Sheikh Khomeini took control as grand ayatollah of the Islamic republic. In conjunction with the revolution, Iranian oil output declined by 4.8 million barrels per day (7 percent of world production at the time) by January 1979. However, this supply disruption may not have been the most important factor pushing oil prices higher. Rather, the Iranian disruption may have prompted a fear of further disruptions and spurred widespread speculative hoarding.

Oil prices began to rise rapidly in mid-1979, more than doubling between April 1979 and April 1980. According to one estimate, surging oil demand—coming both from a booming global economy and a sharp increase in precautionary demand—was responsible for much of the increase in the cost of oil during the crisis.

Through early 1978, the Federal Reserve had maintained a highly accommodative stance of monetary policy, hoping to combat rising unemployment. Ultimately, though, the policies showed little success in stifling the deterioration in the unemployment rate and likely fostered an environment that allowed the rising energy prices to be transmitted into more general inflation. Consumer inflation, which had already begun to accelerate in the United States, continued to rise—from below 5 percent in early 1976 to nearly 7 percent by March 1979. By that time, unease among members of the Federal Open Market Committee (FOMC) that inflation could continue to rise was growing. Records from the meeting of the FOMC on February 28, 1978, indicate that “considerable concern was expressed that the rate of inflation might accelerate significantly as the year progressed [and could] pose difficult questions concerning the appropriate role of monetary policy.” Nevertheless, the committee voted unanimously to keep the policy rate unchanged.

Despite increasing concern among the public and members of the FOMC about the declining value of the dollar and rising pace of inflation, the committee remained hesitant to raise interest rates too aggressively, fearful of stifling fragile economic growth. The Fed raised the federal funds rate from 6.9 percent in April 1978 to 10 percent by the end of the year. The increase was a clear move to try to curb rising inflation. However, modern economic historians now see the increases as timid and insufficient to stem a surge in inflationary pressure, which had already become entrenched in the American psyche and economy. Twelve-month consumer price index inflation rose to 9 percent by the end of 1979.

The Carter administration’s decision to appoint Paul Volcker as Fed chairman in August 1979 was a strong endorsement of using more aggressive monetary policy to try to break inflation’s stranglehold on the US economy. As the president of the Federal Reserve Bank of New York, Volcker had been an outspoken proponent of using monetary policy to combat rising inflation. According to Volcker, “If all the difficulties growing out of inflation were going to be dealt with at all, it would have to be through monetary policy…. [No] other approach could be successful without a successful demonstration that monetary restraint would be maintained.” Volcker and the policy-setting FOMC made taming inflation their top priority, even if it came at the detriment of short-term employment. The policies ultimately proved successful in breaking the cycle of stagflation in the United States. Volcker guided the Fed in raising the federal funds rate from 11 percent at the time he took office to a peak of 19 percent in 1981, and the policy moves successfully lowered the rate of twelve-month inflation from a peak of nearly 15 percent to 4 percent by the end of 1982. Though the Fed’s resolve under Volcker was effective in reducing inflation, the monetary contraction—combined with the impact from the oil price shock—pushed the economy into the most severe recession since the Great Depression and spurred strong popular opposition.

Eventually, slowing economic activity in industrial countries and investments in additional energy production and energy conservation technologies helped to saturate the market with oil and brought an end to the oil crisis. Beginning in mid-1980, real oil prices began to subside, igniting a secular decline that would last for much of the next twenty years.

Board of Governors of the Federal Reserve System. “Meeting of Federal Open Market Committee June 20, 1978: Minutes of Actions.” June 20, 1978.