From the vantage point of policymakers in the Federal Reserve, an oil embargo by Arab producers against the U.S. further complicated the macroeconomic environment of the early 1970s. 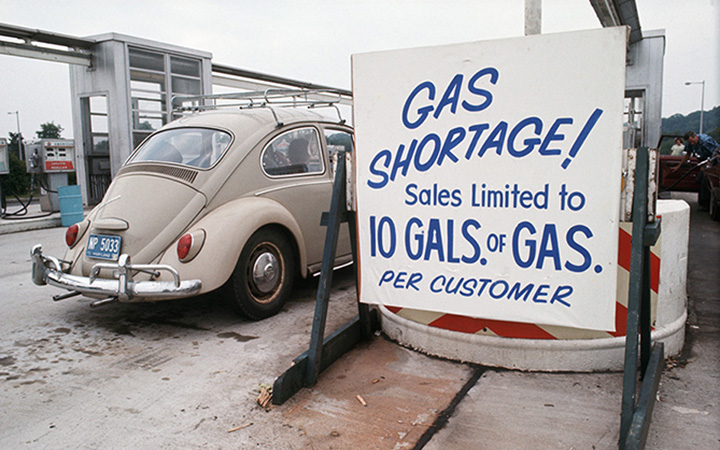 On October 19, 1973, immediately following President Nixon’s request for Congress to make available $2.2 billion in emergency aid to Israel for the conflict known as the Yom Kippur War, the Organization of Arab Petroleum Exporting Countries (OAPEC) instituted an oil embargo on the United States (Reich 1995). The embargo ceased U.S. oil imports from participating OAPEC nations, and began a series of production cuts that altered the world price of oil. These cuts nearly quadrupled the price of oil from $2.90 a barrel before the embargo to $11.65 a barrel in January 1974. In March 1974, amid disagreements within OAPEC on how long to continue the punishment, the embargo was officially lifted. The higher oil prices, on the other hand, remained (Merrill 2007).

As Arthur Burns, the chairman of the Federal Reserve at the time, explained in 1974, the “manipulation of oil prices and supplies by the oil-exporting countries came at a most inopportune time for the United States. In the middle of 1973, wholesale prices of industrial commodities were already rising at an annual rate of more than 10 per cent; our industrial plant was operating at virtually full capacity; and many major industrial materials were in extremely short supply” (Burns 1974). In addition to these cost pressures, the U.S. oil industry had a lack of excess production capacity, which meant it was difficult for the industry to bring more oil to market if needed (Alhajji 2005). Thus, when OAPEC cut oil production, prices had to rise because the American oil industry could not respond by increasing supply. Additionally, non-Organization of the Petroleum Exporting Countries (OPEC) oil sources were declining as a percentage of the world oil industry, and OPEC was therefore gaining a larger percentage of the world oil market. These market dynamics, matched with the effect of OPEC nations’ greater participation rights in the industry, allowed OPEC to wield a much larger influence over the price setting mechanism in the oil market since their formation in 1960 (Merrill 2007).

The devaluation of the dollar that was experienced in the early 1970s was also a central factor in the price increases instituted by OAPEC. Since the price of oil was quoted in dollar terms, the falling value of the dollar effectively decreased the revenues that OPEC nations were seeing from their oil. OPEC nations resorted to pricing their oil in terms of gold and not the dollar (Hammes and Willis 2005). Due to the ending of the Bretton Woods agreement, which had pegged gold to a price of $35, the price of gold rose to $455 an ounce by the end of the 1970s. This drastic change in the value of the dollar is an undeniably important factor in the oil price increases of the 1970s.

The Role of the Federal Reserve

From the vantage point of policymakers in the Federal Reserve, the 1973-74 oil crisis served to further complicate the macroeconomic environment, particularly in regard to inflation. Fed Chairman Burns argued in 1979 that the inflation appeared to be the result of a plethora of forces: “the loose financing of the war in Vietnam. . .the devaluations of the dollar in 1971 and 1973, the worldwide economic boom of 1972-73, the crop failures and resulting surge in world food prices in 1974-75, and the extraordinary increases in oil prices and the sharp deceleration of productivity” (Burns 1979). The intellectual consensus among policymakers at the time was that cost-push inflation (the type of inflation arising from an increase in the prices of inputs to the economy, i.e., worker wages) was outside the influence of monetary policy (Romer and Romer 2012). In the words of an economist who presented to the Federal Open Market Committee in May of 1971, “the question is whether monetary policy could or should do anything to combat a persisting residual rate of inflation ... The answer, I think, is negative. ... It seems to me that we should regard continuing cost increases as a structural problem not amenable to macro-economic measures” (Romer and Romer 2012).

Economists have since come to understand that a central bank can influence the extent to which supply shocks affect inflation, but they face a trade-off. Higher oil prices, because of the widespread effect they have on commodities throughout the economy, will tend to generate both inflationary pressures and slower growth. In the short run, these forces tend to have an inverse relationship, meaning when one rises, the other falls and vice versa. Ben Bernanke for example, discussed this in 2004: “How then should monetary policy react? Unfortunately, monetary policy cannot offset the recessionary and inflationary effects of increased oil prices at the same time. If the central bank lowers interest rates in an effort to stimulate growth, it risks adding to inflationary pressure; but if it raises enough to choke off the inflationary effect…it may exacerbate the slowdown in economic growth.” He goes on to explain that the decision to tighten or ease monetary policy ultimately depends on how policymakers balance the risks inherent in pursuing employment and price stability objectives (Bernanke 2004).

Ultimately, the oil crisis of 1973 and the accompanying inflation was a result of many factors culminating in a perfect economic storm. The oil embargo of 1973 was just one of many complicating factors that led U.S. policymakers to overestimate our national potential and to underestimate their own role in the broad inflation that occurred throughout the 1970s.