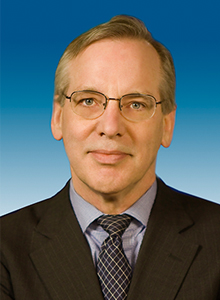 William C. Dudley became the tenth president and chief executive officer of the Federal Reserve Bank of New York on January 27, 2009. He also served as the vice chairman and was a permanent member of the Federal Open Market Committee (FOMC).

Dudley was born in Springfield, Massachusetts. Although he spent his freshman year of college at Columbia University in New York City he received his bachelor's degree from New College of Florida in 1974. He received his doctorate in economics from the University of California, Berkeley in 1982.

Prior to joining the New York Fed, Dudley was a partner and managing director at Goldman, Sachs & Company and was the firm's chief US economist for a decade. Before he joined Goldman Sachs in 1986, he was a vice president at the former Morgan Guaranty Trust Company. Prior to that, he was an economist at the Board of Governors of the Federal Reserve System in Washington, DC, from 1981 to 1983, so he was not a stranger to the Federal Reserve System when he joined the New York Fed in 2007.

Dudley served as executive vice president of the Markets Group, where he also managed the System Open Market Account for the FOMC. As a leader of both the Markets Group and of the Reserve Bank at large, he has seen the New York Fed weather through the most devastating economic storm since the Great Depression. On identifying himself as a "New York Fed person," Mr. Dudley said that "people are here [at the New York Fed] because they want to work on policy and want to make a difference…contributing something very positive to society."1