Rice was born in Florence, South Carolina, in 1919. He earned a bachelor’s degree in 1941 and a master’s in business administration in 1942, both from the City College of New York. Shortly after his graduation, Rice was drafted into the US Air Force and rose to the position of captain as a member of the Tuskegee Airmen.

In the early 1950s, while Rice worked as an assistant in the economics department at the University of California, Berkeley, he received a Fulbright fellowship. The opportunity took him to India, where he became a research associate at the nation’s central bank. Rice’s studies regarding economic development in India became the foundation for his doctoral dissertation. He would go on to earn his doctorate in economics from Berkeley.

Rice taught economics at Berkeley and Cornell before taking a sabbatical in 1960 to work as an economist at the Federal Reserve Bank of New York. In 1962, the United States Agency for International Development offered Rice a post in the newly independent nation of Nigeria, where he helped establish the Central Bank of Nigeria.

In 1964, Rice became deputy director, and later acting director, of the Office of the Developing Nations for the Treasury Department, where he helped formulate financial policies affecting countries in Africa, Asia, and the Middle East. In 1966, Rice was appointed by President Lyndon B. Johnson as alternate director for the United States at the World Bank. In 1972, Rice accepted a position with The National Bank of Washington, eventually rising to senior vice president.

In April 1979, President Jimmy Carter appointed Rice to the Board of Governors. During his tenure, Rice helped to shape the country’s monetary policy during a severe two-year recession as well as during the savings and loan crisis of the 1980’s. In addition, Rice directed the Board of Governors’ administrative team, and oversaw the Board’s international organizations and outreach programs.After leaving the Federal Reserve, Rice served on the boards of several civic organizations, including the Federal City Council; Federal City Housing Corporation; Greater Washington Business Resource Center; the DC Chapter of American Red Cross; the Center for Municipal and Metropolitan Research; the Washington Performing Arts Society; and the Consortium of Universities.

Emmett was the father of Susan Rice, former US ambassador to the United Nations and the country’s former National Security Advisor. 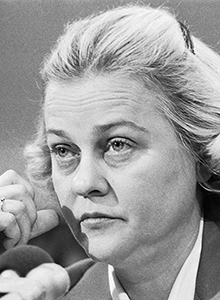