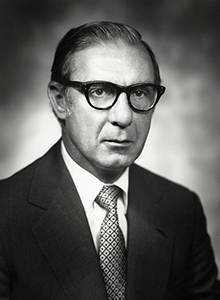 Gramley was born in Aurora, Illinois. After serving in the military during World War II, Gramley entered Beloit College at Aurora University. In 1951, he earned a bachelor’s degree with honors and membership in Phi Beta Kappa. He went on to study economics at Indiana University, earning a master’s degree in 1952 and a doctorate in 1956.

In 1955, Gramley joined the Federal Reserve Bank of Kansas City as a financial analyst. In 1962, Gramley accepted an associate professorship of economics at the University of Maryland. Two years later, he joined the Board of Governors as a senior economist, rising to the position of director of the Division of Research and Statistics in 1974.

In 1977, Gramley left the Board of Governors to become one of the three members of the President’s Council of Economic Advisers (CEA). During his tenure at the CEA, Gramley advised President Jimmy Carter on several economic issues, including international market turmoil and the oil shock of 1978–79.

In April 1980, President Carter nominated Gramley to the Board of Governors. During his tenure, he helped steer the country through many economic stresses, including a significant recession from 1981 to 1982 as well as a savings and loan crisis. Gramley delivered a series of noteworthy speeches during his term, including "Supply-Side Economics: Its Role in Curing Inflation," "The Outlook for Economic Expansion in 1984" and "Our Internal and External Deficits and the Relationship Between Them."

After leaving the Board, Gramley accepted a position as chief economist at the Mortgage Bankers Association of America. In 2002, he became a senior economic adviser at the Schwab Washington Research Group. In 2007, he joined Soleil Securities Corporation.  Gramley served as a senior adviser at Potomac Research Group in Washington, DC.