On July 26, 1933, the Columbus Dental Manufacturing Company applied to the Federal Reserve Bank of Cleveland for $10,000 in pure gold. The next day, the Bank approved the application, sending the firm twenty-nine gold bars weighing 476.92 ounces and valued at $9,867.14. In the depths of the Great Depression, why was the Cleveland Fed supplying gold to a firm that made false teeth, rather than supplying gold coins and a gold-backed currency to banks? Does the Federal Reserve supply gold to dentists today?

Answers to these questions revolve around Roosevelt’s gold program. The program, which began in 1933, first restricted the private use of gold, requiring businesses like the Columbus firm to apply to the Fed for gold bars. The Gold Reserve Act of 1934 was the culmination of this program; President Roosevelt signed the Act on January 30, 1934.

Section 2 of the act transferred ownership of all monetary gold in the United States to the US Treasury. Monetary gold included all coins and bullion held by individuals and institutions, including the Federal Reserve. In return, individuals and institutions received currency at a rate of $35 per ounce of gold. This rate reduced the gold value of the dollar to 59 percent of the value set by the Gold Act of 1900, which equaled $20.67 per ounce. That rate had prevailed until the spring of 1933, when the Roosevelt administration began its campaign to devalue the dollar.

Sections 5 and 6 of the act prohibited the Treasury and financial institutions from redeeming dollars for gold, inverting the system that had prevailed in the United States since the nineteenth century. Under that system, the government converted paper currency to gold coins, whenever citizens desired to do so. Now, the government converted gold into dollars, regardless of whether citizens wanted to engage in the exchange.

Sections 3, 4, and 11 of the act regulated the use of gold within the United States. Regulations governed the use, acquisition, transportation, importing, exporting, and possession of gold. For example, monetary gold had to be held as bars. Coins were forbidden. Bars could be obtained for certain industrial uses, such as the manufacture of dental appliances, jewelry, and electronics. Gold items could be bought and sold if they weighed less than fifteen ounces, but transactions for heavier items required licenses. Violators faced stiff penalties.

Section 10 of the act established a stabilization fund of $2 billion under control of the Treasury. These funds came from the profits the government earned when it raised the price of gold. The Treasury could use the Exchange Stabilization Fund (ESF) to buy or sell gold, foreign currencies, financial securities, and other financial instruments in order to control the dollar’s value and to conduct open-market operations without the assistance (or approval) of the Federal Reserve. The Treasury could also use the ESF to transfer funds clandestinely to neutral nations and international allies; this tool proved useful during World War II.2

Section 12 of the act authorized the president to establish the gold value of the dollar by proclamation. The president did this the day after he signed the act. Then, Roosevelt explained the purpose of these actions was to increase the supply of credit, “to stabilize domestic prices and to protect the foreign commerce against the adverse effect of depreciated foreign currencies” (Roosevelt 1934). 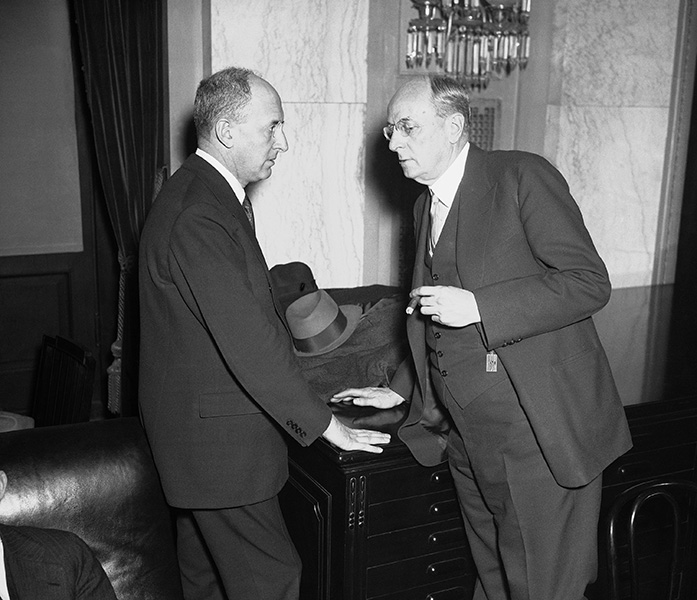 “The plain and unvarnished fact is that the Federal Reserve System of today is not the one established 20 years ago, any more than it is the system which existed a year back. The present organization has been shorn of its power to formulate an independent credit policy and it can no longer regulate the flow of funds into and out of this country, as it did when the United States was on the gold standard. The gold reserve act of 1934 not only took from the system all of its gold, but in doing so definitely deprived it of future control over gold movements, although of course that power had been lost as a result of the gold embargo and subsequent monetary manipulations. With the passage of this act, therefore, the central banking system of this country formally surrendered one of the chief privileges and duties which it had exercised prior to suspension of gold payments. … The Administration has assumed responsibility for defining our monetary policies” (Washington Post  February 17, 1934, 8).

As an agent for the Treasury, the Federal Reserve executed Treasury policies, which included supplying dental manufacturing companies with gold to make false teeth.

Today, you might ask, do dentists still get gold from the Federal Reserve? No is the answer. The provisions of the Gold Reserve Act of 1934 applied to the stock of monetary gold in the United States at that time. The preponderance of that gold remains the property of the Treasury, although much of it physically resides in the vaults of the Federal Reserve Bank of New York.

The act’s provisions did not apply to gold in foreign countries or gold mined after the passage of the act. That gold forms the foundation for the modern gold market, which is held in the hands of individuals and firms, which is where dentists (and everyone else) buy gold today. US citizens have been able to do this freely and legally since 1974, when President Ford signed an act of Congress permitting US citizens to own and deal in gold. A few years before that, the Nixon administration had severed the dollar’s last link to gold.

Given these changes during the 1970s, a reasonable question may be: Does the Gold Reserve Act of 1934 have a legacy today? The answer is yes. As we mentioned earlier, the act established the ESF. The US Treasury has used the ESF to promote exchange rate stability and counter disorderly conditions in foreign exchange markets. It did this by buying and selling foreign currency and by providing short-term credit to foreign governments and international monetary authorities. During the financial crisis in the fall of 2008, the US Treasury used the ESF to establish a temporary insurance program for money-market mutual funds (Blinder 2013, 145-7; Humpage 2008). Operations of the ESF are normally conducted through the Federal Reserve Bank of New York, operating in its capacity as a fiscal agent for the Department of Treasury.3

Blinder, Alan S. After the Music Stopped: The Financial Crisis, The Response, and the Work Ahead. New York: Penguin Press, 2013.