President Richard Nixon’s actions in 1971 to end dollar convertibility to gold and implement wage/price controls were intended to address the international dilemma of a looming gold run and the domestic problem of inflation. The new economic policy marked the beginning of the end of the Bretton Woods international monetary system and temporarily halted inflation.

The international monetary system after World War II was dubbed the Bretton Woods system after the meeting of forty-four countries in Bretton Woods, New Hampshire, in 1944. The countries agreed to keep their currencies fixed (but adjustable in exceptional situations) to the dollar, and the dollar was fixed to gold. Since 1958, when the Bretton Woods system became operational, countries settled their international balances in dollars, and US dollars were convertible to gold at a fixed exchange rate of $35 an ounce. The United States had the responsibility of keeping the dollar price of gold fixed and had to adjust the supply of dollars to maintain confidence in future gold convertibility.

Initially, the Bretton Woods system operated as planned. Japan and Europe were still rebuilding their postwar economies and demand for US goods and services—and dollars—was high. Since the United States held about three-quarters of the world’s official gold reserves, the system seemed secure.

In the 1960s, European and Japanese exports became more competitive with US exports. The US share of world output decreased and so did the need for dollars, making converting those dollars to gold more desirable. The deteriorating US balance of payments, combined with military spending and foreign aid, resulted in a large supply of dollars around the world. Meanwhile, the gold supply had increased only marginally. Eventually, there were more foreign-held dollars than the United States had gold. The country was vulnerable to a run on gold and there was a loss of confidence in the US government’s ability to meet its obligations, thereby threatening both the dollar’s position as reserve currency and the overall Bretton Woods system.

Many efforts were made to adjust the US balance of payments and to uphold the Bretton Woods system, both domestically and internationally. These were meant to be “quick fixes” until the balance of payments could readjust, but they proved to be postponing the inevitable.

In March 1961, the US Treasury’s Exchange Stabilization Fund (ESF), with the Federal Reserve Bank of New York acting as its agent, began to intervene in the foreign-exchange market for the first time since World War II. The ESF buys and sells foreign exchange currency to stabilize conditions in the exchange rate market. While the interventions were successful for a time, the Treasury’s lack of resources limited its ability to mount broad dollar defense.

From 1962 until the closing of the US gold window in August 1971, the Federal Reserve relied on “currency swaps” as its key mechanism for temporarily defending the US gold stock. The Federal Reserve structured the reciprocal currency arrangements, or swap lines, by providing foreign central banks cover for unwanted dollar reserves, limiting the conversion of dollars to gold.

In March 1962, the Federal Reserve established its first swap line with the Bank of France and by the end of that year lines had been set up with nine central banks (Austria, Belgium, England, France, Germany, Italy, the Netherlands, Switzerland, and Canada). Altogether, the lines provided up to $900 million equivalent in foreign exchange. What started as a small, short-term credit facility grew to be a large, intermediate-term facility until the US gold window closed in August 1971. The growth and need for the swap lines signaled that they were not just a temporary fix, but a sign of a fundamental problem in the monetary system.

International efforts were also made to stem a run on gold. A run in the London gold market sent the price to $40 an ounce on October 20, 1960, exacerbating the threat to the system. In response, the London Gold Pool was formed on November 1, 1961. The pool consisted of a group of eight central banks (Great Britain, West Germany, Switzerland, the Netherlands, Belgium, Italy, France, and the United States). In order to keep the price of gold at $35 an ounce, the group agreed to pool gold reserves to intervene in the London gold market in order to maintain the Bretton Woods system. The pool was successful for six years until another gold crisis ensued. The British pound sterling devalued and another run on gold occurred, and France withdrew from the pool. The pool collapsed in March 1968.

At that time the seven remaining members of the London Gold Pool (Great Britain, West Germany, Switzerland, the Netherlands, Belgium, Italy, and the United States) agreed to formulate a two-tiered system. The central banks agreed to use their gold only in settling international debts and to not sell monetary gold on the private market. The two-tier system was in place until the US gold window closed in 1971.

These efforts of the global financial community proved to be temporary fixes to a broader structural problem with the Bretton Woods system. The structural problem, which has been called the “Triffin dilemma,” occurs when a country issues a global reserve currency (in this case, the United States) because of its global importance as a medium of exchange. The stability of that currency, however, comes into question when the country is persistently running current account deficits to fulfill that supply. As the current account deficits accumulate, the reserve currency becomes less desirable and its position as a reserve currency is threatened.

While the United States was in the midst of the Triffin dilemma, it was also facing a growing problem of inflation at home. The period that became known as the Great Inflation had started and policymakers had put anti-inflation policies in place, but they were short lived and ineffective. At first, both the Nixon administration and the Federal Reserve believed in a gradual approach, slowly lowering inflation with a minimum increase in unemployment. They would tolerate an unemployment rate of up to 4.5 percent, but by the end of the 1969-70 recession the unemployment rate had climbed to 6 percent, and inflation, as measured by the consumer price index, was 5.4 percent.

When Arthur Burns became chairman of the Board of Governors in 1970, he was faced with both slow growth and inflation, or stagflation. Burns believed that tightening monetary policy and the increase in unemployment that accompanied it would be ineffective against the inflation then occurring, because it stemmed from forces beyond the control of the Fed, such as labor unions, food and energy shortages, and OPEC’s control of oil prices. Moreover, many economists in the administration and at the Fed, including Burns, shared the view that inflation could not be reduced with an acceptable unemployment rate. According to economist Allan Meltzer, Andrew Brimmer, a Fed Board member from 1966 to 1974, noted at that time that employment was the principal goal and fighting inflation was the second priority. The Federal Open Market Committee implemented an expansionary monetary policy. 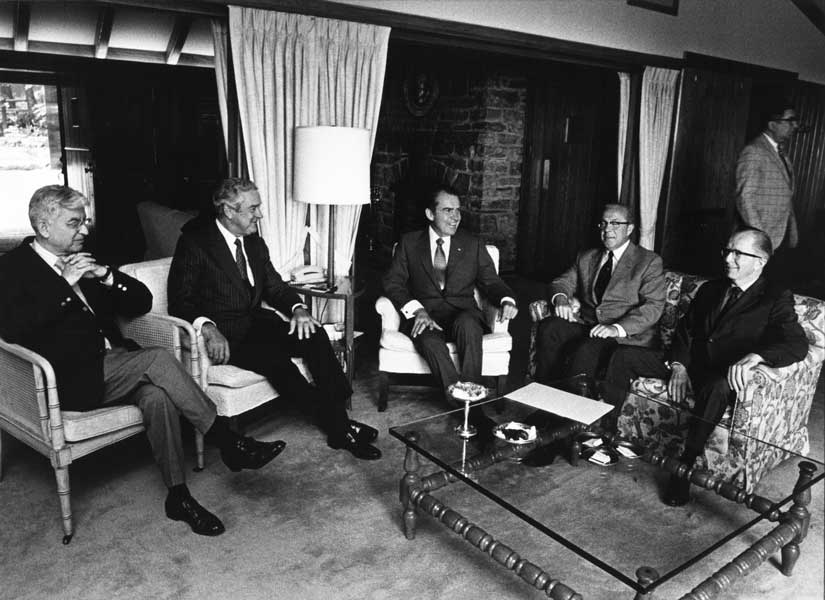 With inflation on the rise and a gold run looming, Nixon’s administration coordinated a plan for bold action. From August 13 to 15, 1971, Nixon and fifteen advisers, including Federal Reserve Chairman Arthur Burns, Treasury Secretary John Connally, and Undersecretary for International Monetary Affairs Paul Volcker (later Federal Reserve Chairman) met at the presidential retreat at Camp David and created a new economic plan. On the evening of August 15, 1971, Nixon addressed the nation on a new economic policy that not only was intended to correct the balance of payments but also stave off inflation and lower the unemployment rate.

The first order was for the gold window to be closed. Foreign governments could no longer exchange their dollars for gold; in effect, the international monetary system turned into a fiat one. A few months later the Smithsonian agreement attempted to maintain pegged exchange rates, but the Bretton Woods system ended soon thereafter. The second order was for a 90-day freeze on wages and prices to check inflation. This marked the first time the government enacted wage and price controls outside of wartime. It was an attempt to bring down inflation without increasing the unemployment rate or slowing the economy. In addition, an import surcharge was set at 10 percent to ensure that American products would not be at a disadvantage because of exchange rates.

Shortly after the plan was implemented, the growth of employment and production in the United States increased. Inflation was practically halted during the 90-day wage-price freeze but would soon reappear as the monetary momentum in support of inflation had already begun. Nixon’s new economic policy represented a coordinated attack on the simultaneous problems of unemployment, inflation, and disequilibrium in the balance of payments. The plan was one of the many prescriptions written to cure inflation, which would eventually continue to rise.