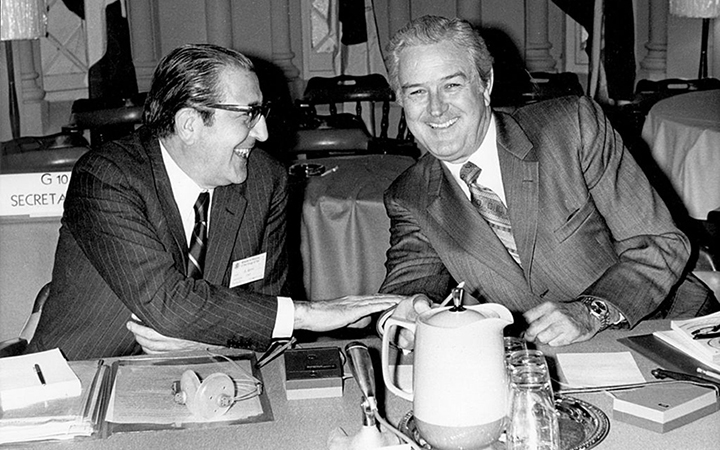 Rinaldo Ossola, deputy governor of the Bank of Italy (left) chats with John Connally (right), U.S. Treasury Secretary and chairman of the meeting of the Group of Ten at the December 1971 meeting at the Smithsonian (Consolidated News Pictures/Hulton Archive/Getty Images)
by Owen Humpage, Federal Reserve Bank of Cleveland

In December 1971, monetary authorities from the world’s leading developed countries met at the Smithsonian Institution in Washington, DC. They hoped to rescue an international arrangement that was rapidly disintegrating, the Bretton Woods system of fixed exchange rates. The Smithsonian Agreement is what they came up with, but it proved too little, too late. Within fifteen months, the Bretton Woods system collapsed.

The basic structure of the Bretton Woods system contained a flaw that began to emerge in the early 1960s. Bretton Woods was based on gold, but the global gold stock could not meet the world’s demand for international reserves, without which pegged exchange rates were impossible. Consequently, the United States provided dollar reserves by running a persistent balance of payments deficit and promised to redeem those dollars for gold at $35 per ounce. By 1961, however, the amount of dollar claims outstanding began to exceed the U.S. government’s stock of gold. The deficit of gold implied that the United States might not be able to keep its pledge to convert dollars for gold at the official price. It might have to devalue the dollar.

The prospect of a dollar devaluation created strong incentives to exchange dollars for U.S. gold. The U.S. Treasury and the Federal Reserve tried to keep this from happening through stop-gap measures, but they could not solve the underlying paradox: Without additional dollar reserves, the system was unworkable; with additional dollar reserves, the system was unstable.

This difficult and uncertain situation became even worse after 1965. A rising U.S. inflation rate expanded the U.S. balance-of-payments deficit and pumped even more dollars abroad. Inflation in the United States rose from less than 2 percent in early 1965 to 6 percent by the end of 1969. The existing structure of fixed exchange rates seemed unsustainable in the face of such inflation. By the summer of 1971, speculators were moving funds out of dollars and into foreign currencies, and central banks were rapidly converting dollars into U.S. gold.

In August 1971, President Nixon "closed the gold window," that is, he no longer allowed foreign central banks to exchange dollars for the U.S. Treasury’s gold. While the flaws of Bretton Woods and the Federal Reserve’s monetary policy had certainly played a role in the situation, Nixon also blamed the U.S. balance-of-payments deficits on unfair trading practices and other countries’ unwillingness to share the military burden of the Cold War. He wanted foreign currencies to appreciate against the dollar, but he did not want to devalue the dollar in terms of gold (Silber 2012, 93).

Nixon’s actions sent shockwaves through the international community. A crisis atmosphere prevailed. Many key foreign currencies began to appreciate against the dollar, despite heavy intervention. Restraints on cross-border financial flows began to emerge. Monetary officials around the globe feared international monetary relations would collapse amid the uncertainty about exchange rates, the imminent spread of protectionism, and the looming prospects of a serious recession. Officials at the International Monetary Fund immediately pressed for negotiations to revamp exchange-rate parities and address other complaints about the international financial system (de Vries 1976, 531-556).

At the Smithsonian meeting, the United States agreed to devalue the dollar against gold by approximately 8.5 percent to $38 per ounce. Other countries offered to revalue their currencies relative to the dollar. The net effect was roughly a 10.7 percent average devaluation of the dollar against the other key currencies (de Vries 1976, 555).

At the Smithsonian meeting, countries also agreed to future talks on broader reforms of the international monetary system. Issues that would be discussed included the central role of the dollar, shared responsibility for exchange-rate stability, the future role of gold, a means for easing exchange-rate adjustment, and measures to deal with volatile financial flows. Foreign nations also agreed to comply with Nixon’s request to lessen existing trade restrictions and to assume a greater share of the military burden.

The Smithsonian Agreement did little to restore confidence in the Bretton Woods system. During 1972, speculators pushed many European currencies toward the tops of their permissible—but now wider—exchange-rate bands. By intervening, their central banks accumulated large amounts of unwanted dollars, which stoked inflationary pressures. Germany and Japan expanded their restraints on financial flows, and other countries began to follow suit.

Gold prices, a barometer of uncertainty, rose to around $60 an ounce by mid-1972 and $90 an ounce by early 1973. Speculation was rife. On February 12, 1973, with exchange markets in Europe and Japan closed, the United States devalued the dollar by an additional 10 percent to $42 an ounce. When markets reopened, speculation against the dollar became rampant. Within a month nearly all major currencies were floating against the dollar. The Bretton Woods system was finished (IMF 1973, 2-8).