Originally created by the Banking Acts of 1933 and 1935, the Federal Open Market Committee continues to set monetary policy for the United States. 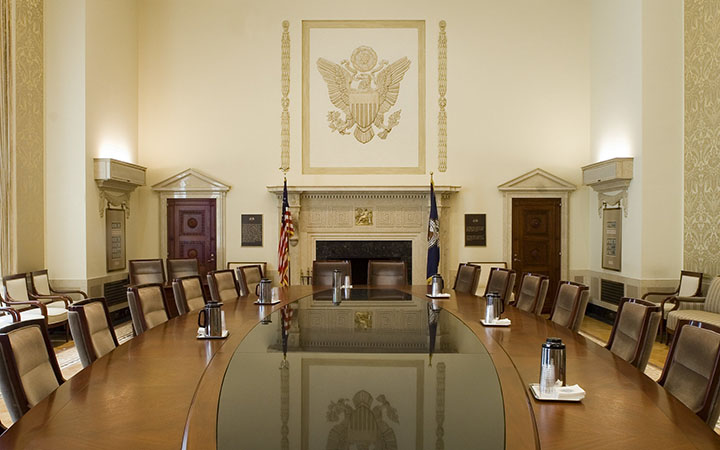 Interior of the Board room in the Marriner S. Eccles building

The FOMC is the body of the Federal Reserve System that sets national monetary policy. The FOMC makes all decisions regarding the conduct of open market operations, which affect the federal funds rate (the rate at which depository institutions lend to each other), the size and composition of the Federal Reserve’s asset holdings, and communications with the public about the likely future course of monetary policy. The FOMC makes all decisions about the “stance” of U.S. monetary policy to help move the economy toward the congressionally mandated goals of maximum employment and price stability.

Congress enacted legislation that created the FOMC as part of the Federal Reserve System in 1933 and 1935.In the early years of the Fed before the creation of the FOMC, the twelve Federal Reserve Banks undertook open market operations both separately and in coordination with one another. In 1923, they formed the Open Market Investment Committee for these coordinated efforts, which was then transformed into the Open Market Policy Conference in 1930.1 A body called the Federal Open Market Committee was first convened in 1933, following the Glass-Steagall Act; but the FOMC as we know it came into effect only in March of 1936 "as constituted by Section 12A of the Federal Reserve Act as amended by the Banking Act of 1935," as the newly named chairman, Marriner Eccles, explained at that meeting.

The way the Fed conducts monetary policy and even the way it understands the economy has changed a great deal since the 1930s, but the basics of the FOMC's regular operations have stayed mostly the same.

The FOMC holds regular meetings eight times each year—about every six weeks. Transcripts and many other historical meeting materials are available to the public on the Board of Governors' website back to 1936.4 In 2011, Chairman Ben Bernanke announced that he would hold quarterly press conferences following certain FOMC meetings. In 2019, Chair Jerome Powell began to hold those press conferences after every FOMC meeting.5

The most relevant and accurate information about the Federal Open Market Committee and its work can always be found online at federalreserve.gov.

The photo illustration for this essay, showing the room where the FOMC meets, is a U.S. government work in the public domain.