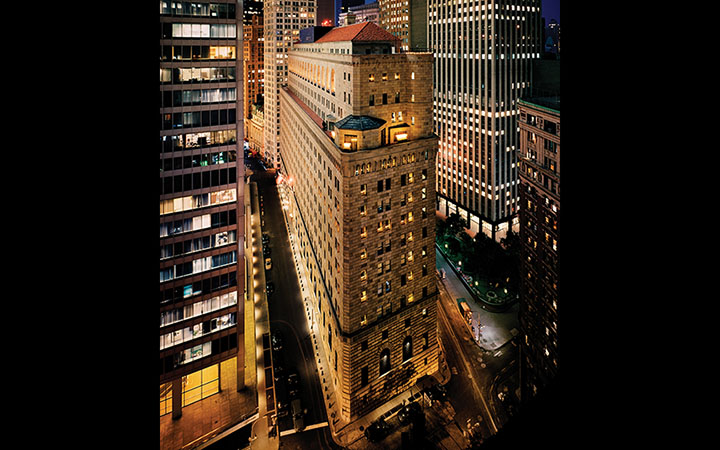 Prior to the New York Fed opening in 1914, there was some controversy regarding how prominent the New York branch would be. There was no doubt that New York would receive a Federal Reserve Bank given the city’s financial milieu. The city’s most important financiers, including J.P. Morgan, argued that the New York Fed should be of commanding importance to receive recognition from central banks in Europe.1 Financiers also argued the New York Fed should have approximately half of the entire federal reserve system’s capital. Yet many feared that giving the New York Fed so much capital would be giving too much power to the New York District. On April 2, 1914, the Reserve Bank Organization Committee announced that twelve Federal Reserve banks would be established to cover the various districts across the country. At this time, the New York Fed’s influence was maintained to New York State. Although the New York Fed was smaller in scope than the New York banking community had originally intended, it was still one of the largest and dominant within the system with over $20 million in capital stock, which was nearly four times the amount of capital of the smallest banks in the system, including Atlanta and Minneapolis.2

On November 16, 1914, the New York Fed opened for business under the leadership of Benjamin Strong, who was previously president of the Bankers Trust Company. Benjamin Strong was an influential central banker, and throughout the 1920s, he promoted more effective cooperation among the world’s central banks.3 The initial New York Fed staff consisted of seven officers and 85 clerks, many on loan from local banks. For some context of scale, today the New York Fed employs approximately 3,000 people.4 During its first day of operation, the Bank took in $100 million from 211 member banks and received its first shipment of Federal Reserve Notes. By 1917, given the rapid growth and scope of the New York Fed’s responsibilities, the Bank’s directors issued a call for the construction of a new building suited to the special needs of the Bank.5 In 1918, the Real Estate Committee purchased the new main building site which consisted of of 45,750 square feet at the total cost of $4,797,881.72.6

When it was time to design the new building, the planners intended to inspire public confidence in the recently formed Federal Reserve System through the architecture and convey a sense of strength and stability of the system. The two architects who were given the project were Edward York and Philip Sawyer. They designed the New York Fed building based on palaces of the Renaissance period, particularly the Strozzi Palace, Pitti Palace, and the Palazzo Vecchio, all of which are in Florence, Italy.

Meanwhile, during the planning of the construction of the new building, the Bank opened a branch in Buffalo, New York on May 15, 1919. This was the first branch of the New York Fed, and it served Monroe, Livingston, Alleghany, Orleans, Genesee, Wyoming, Cattaraugus, Niagara, Eric, and Chautauqua counties. The Buffalo branch was closed in October 2008.7

In 1921, construction of the new building began and at that time had the deepest basement in Manhattan, five floors (or 80 feet) below street level and 50 feet below sea level. Careful consideration was made regarding the geological foundation of the building, and the Manhattan Island bedrock was one of the few bedrock foundations deemed strong enough to support the Bank’s vault, its 90 tons nine-foot door, 140 tons door frame, and the weight of the gold that was to be held inside.8 Construction was completed in 1924, and by 1927, the vault had 10% of the world’s entire store of monetary gold. Much of the gold in the vault arrived during and after World War II as many countries wanted to store their gold reserves in a safe location. Holdings in the gold vault continued to increase and peaked in 1973, shortly after the United States ended its practice of converting dollars into gold. At its peak, the vault contained over 12,000 tons of monetary gold. Since that time, gold deposit and withdrawal activity has slowed and the vault has experienced a gradual but steady decline in overall holdings. However, the vault today remains the world’s largest known depository of monetary gold. None of the gold stored in the vault belongs to the New York Fed or the Federal Reserve System, and no individuals or private sector entities are permitted to store gold in the vault. The New York Fed acts as the guardian and custodian of the gold on behalf of account holders, which include the U.S. government, foreign governments, other central banks, and official international organizations.9

In 1976, the Bank opened a regional office in Utica, New York. The Utica office provided commercial check processing and check adjustment services to financial institutions and Federal Reserve offices throughout the country. The Utica branch was closed in March 2008.

In 1992, the Bank opened an office in East Rutherford, New Jersey to accommodate currency and check processing operations and conduct electronic payments. Today this office is known as the East Rutherford Operations Center, or EROC, where it processes more than 19 million notes deposited by depository institutions each business day.10

On September 11, 2001, and in the days, weeks, and months after, the New York Fed played an important role in ensuring that banking and financial activities still continued and that basic dollar payment systems never closed. In addition, given its close proximity to the World Trade Center, the New York Fed’s law enforcement officers, medical team, and human resources staff were available to treat pedestrians and emergency workers who needed medical attention. In the days and weeks after the attack, the Bank offered medical assistance, shower facilities, and free meals daily to the New York City police, fire department workers, the National Guard, and other rescue workers in addition to the Bank staff. The New York Fed staff was grateful to be able to offer its resources in support of the efforts of the September 11 rescue workers.11

Its operations have grown over the past hundred years, yet the New York Fed still maintains its unique responsibilities, including conducting open market operations, intervening in foreign exchange markets, and storing monetary gold for foreign central banks, governments and international agencies. Today, the New York Fed continues to share responsibilities with the other Reserve Banks to help keep the country’s economy healthy and stable, helping to fulfill the mission of the Federal Reserve System.