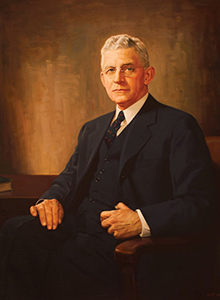 William S. McLarin Jr. was the seventh president and chief executive officer of the Federal Reserve Bank of Atlanta. He served from May 9, 1941, to his retirement on March 1, 1951.

McLarin was born in 1889 in Fairburn, Georgia. When he was seventeen, he got his first job as a runner for Atlanta National Bank and then worked several years in the collection department of the Atlanta Clearing House. He took a job at the Atlanta Fed in 1916 as chief clerk, first in the transit department, then in the auditing department.

McLarin’s career was interrupted by overseas service during World War I; he was a captain upon leaving the military. He returned to the Federal Reserve and worked in Jacksonville for ten years, starting in 1921, first as cashier and then managing director. He returned to the Atlanta Fed in 1931 as assistant deputy governor. From 1932 to 1937, he also was the district manager of the Reconstruction Finance Co., an independent government agency. At the Atlanta Fed, he moved through the ranks as assistant vice president, vice president, vice president and cashier, and first vice president before being elected president in 1941. He served as president until his retirement in 1951.

During his tenure, World War II started and the Fed helped the US Treasury finance the war effort. McLarin wrote an article advocating the purchase of war bonds.

At the Atlanta Fed during World War II, employment boomed to handle the large number of savings bonds entrusted to the Bank. Women played a more active role in the workforce, as men were called up for military service. In 1945, women made up 78 percent of the Atlanta Fed’s workforce.

McLarin was still president after the war, when the Federal Reserve shifted its focus from accommodating the government’s financing needs to rising inflation in the postwar economy.

McLarin was a life member of the Capitol City Club, the Atlanta Chamber of Commerce, American Legion Post 134, and the Masonic Order. He also served as a member of the Fulton County Board of Public Welfare. 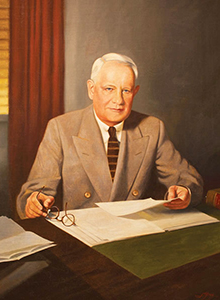