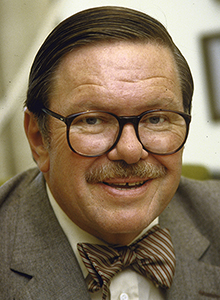 J. Charles Partee became a member of the Board of Governors of the Federal Reserve System on January 5, 1976. He served in that position until February 7, 1986.

Partee was born in 1927 in Defiance, Ohio. He graduated from Indiana University, where he received a bachelor’s degree in business (with distinction) in 1948 and a master’s degree in business administration in finance in 1949. Partee joined the Federal Reserve Bank of Chicago in 1949 as an economist specializing in consumer finance, mortgage markets, and savings. In 1956, he joined Northern Trust Company of Chicago as an associate economist and later served as second vice president (1958-61).

Before becoming a Board member, Partee also served as senior economist for the Federal Open Market Committee and as the Federal Reserve’s representative on the board of directors of the Securities Investor Protection Corporation. He was the US representative to (and vice chairman of) the Committee on Financial Markets of the Organisation for Economic Co-operation and Development from 1970 to 1975.

As a governor, Partee was the Board’s representative on the Federal Financial Institutions Examination Council, a statutory body devoted to seeking greater uniformity in supervision, examination, and reports among the five federal agencies regulating depository institutions. He also served as chairman of the board of directors of the Neighborhood Reinvestment Corporation. In addition, Partee was a member of the Gold Commission, which was established by Congress to assess the role of gold in domestic and international monetary systems.

After his retirement in 1986, Partee spent time boating and wintering in the Florida Keys and limited his professional activities to membership on the board of State Farm Insurance and serving as a trustee for a family of mutual funds.