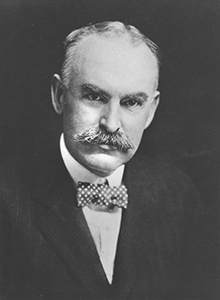 Archibald C. Kains served as the Federal Reserve Bank of San Francisco’s first governor (a position that was later redesignated president) when it opened on November 16, 1914, and resigned on July 6, 1917.

Kains worked at the Canadian Bank of Commerce for twenty-five years. He was manager of the San Francisco branch for several years when, in 1908, he was unanimously elected the San Francisco Clearing-house Association’s first clearing-house examiner. According to a San Francisco Chronicle article from March 7, 1908, “The new official will have the same power over the banks under his supervision that the State bank commissions have over all banks in the State, and the books of all the banks will be open at all times to his scrutiny.”

The new position gave Kains supervisory power over member banks in order to avoid failures like that of the California Deposit and Trust Company, which closed its doors in October 1907 holding nearly $9 million in depositors’ money. “The new plan,” said the Chronicle, “will make it impossible for such a thing as the recent failure of the California Safe Deposit and Trust Company to occur.” The Chronicle also noted that Chicago had adopted a similar plan and St. Louis was considering one. In 1909, Kains spoke about “Clearing House Examination of Banks” at the California Bankers’ Association’s 15th Convention.

While Kains was governor of the San Francisco Fed, Secretary of the Treasury William McAdoo appointed him as a financial advisor to the US Section of the International High Commission. The commission was created during the May 1915 Pan-American Financial Congress in order to open up new opportunities for foreign trade. In April 1916, US delegates including Kains toured South America and met in Buenos Aires for the annual meeting of the commission. The San Francisco Chronicle noted on March 2, 1916, that President Woodrow Wilson’s Administration considered the tour “an important step toward development of closer relations among the American Republics.”

Also during his tenure at the San Francisco Fed, Kains served as chairman of the Twelfth Federal Reserve District’s first Liberty Loan committee.

Kains left the Federal Reserve to be president of the American Foreign Banking Corporation of New York, a new organization specializing in financing imports and exports. After four years, he served as president of the Federal International Banking Company of New Orleans. When that bank was dissolved in 1925, he retired and moved back to Canada.