The RBOC comprised Secretary of the Treasury William G. McAdoo, Secretary of Agriculture David F. Houston, and Comptroller of the Currency John Skelton Williams. The RBOC was charged with designating between eight and twelve cities as Federal Reserve cities and apportioning the country into districts, each of which would contain one Reserve Bank city. Furthermore, the boundaries of each district had to take into account that region’s “convenience and customary course of business” (Federal Reserve Act 1913).

In addition to holding hearings and accepting petitions from bankers and other parties, the RBOC polled national banks on their first, second, and third choices for Reserve Bank cities.

Some cities were obvious choices, such as New York, Chicago, and St. Louis, which were designated central reserve cities under the National Banking Act of 1863 and subsequent legislation. Despite the RBOC’s efforts to clarify the criteria used to draw district lines and select Reserve Bank cities, several cities nevertheless sparked controversies over the eventual decisions.

The Federal Reserve Act mandated that each Reserve Bank have a minimum capital of $4 million. Member banks had to subscribe an amount equal to 6 percent of their own capital and surplus in their Reserve Bank. To divide available capital more evenly across the districts, districts in the Northeast, with its higher concentration of commercial banks and bank capital, would necessarily be smaller geographically than districts elsewhere. The availability of bank capital, however, was just one of many factors behind drawing the districts.

On April 2, 1914, the RBOC announced its decision and published a report describing the selection process. In drawing the districts and selecting Reserve Bank cities, the committee considered the following criteria:

New Orleans and Baltimore were in an uproar when the decision was announced, as both cities were larger than some selected. Large protests were held, and some of the cities’ political leaders denounced the RBOC’s decision.

Richmond’s selection as a Reserve Bank location also engendered criticism, because Atlanta—another southeastern city—was also designated a Reserve Bank city. Some, like Henry Parker Willis, who aided the RBOC in the organization of the Federal Reserve System, argued that political pressure played a role in Richmond’s selection. Others suspected political pressures, and ties to President Wilson’s cabinet, in Cleveland’s selection over Cincinnati or Pittsburgh. Some questioned why there were two Reserve Banks in Missouri—Kansas City and St. Louis—and linked the decision to the numerous Missouri politicians then in office.

As a result of the criticism that the RBOC received from both the public and Congress, it published a statement defending its decision on April 10, 1914, and the results of the poll conducted among national banks. The RBOC explained that New Orleans didn’t receive Reserve Bank designation because although the size of the banks in New Orleans, Atlanta, and Dallas were similar at the time, the previous decade had seen the Atlanta and Dallas banking markets double, while the size of the New Orleans market had changed little. As for Richmond, the RBOC referred to the bankers’ poll that showed Richmond receiving more votes than Baltimore. 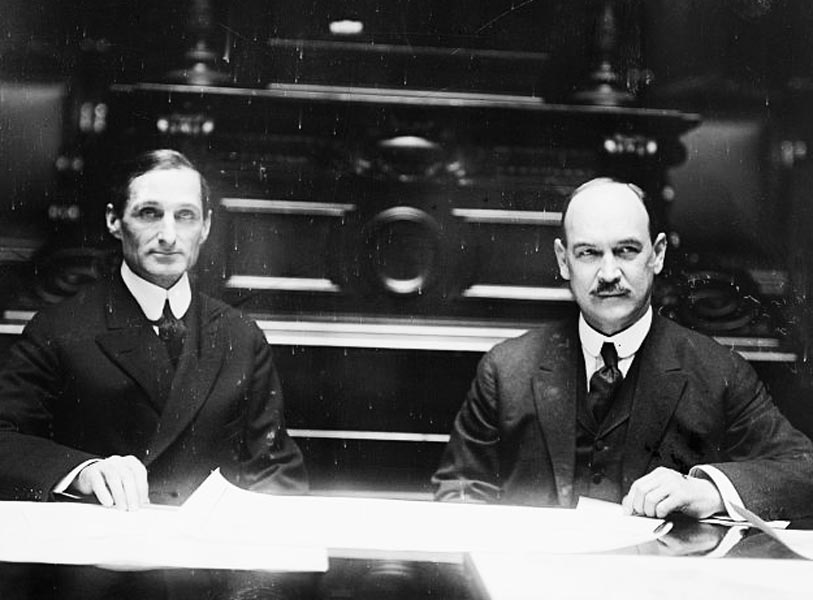 In his memoirs, Houston—the agriculture secretary and RBOC member—recalled that he and the committee were “in for a great deal of roasting no matter what we decided.” While traveling to the public hearings across the country, he and Treasury Secretary McAdoo discovered that many citizens perceived having a Reserve Bank in their city as an economic boost. However, the RBOC sought to locate Reserve Banks in cities with already-flourishing banking markets to support the functioning of the financial system.

In ninety-eight days, the RBOC completed its task of organizing the system of Reserve Banks, and the twelve Federal Reserve District Banks opened for business less than one year after the committee was formed. Despite the controversies, the Reserve Banks have remained in the twelve original cities, and district lines have seen only minor changes since they were first drawn.

Federal Reserve Bank of San Francisco. “Dr. Econ: First, why haven't the boundaries of the 12 Federal Reserve Districts been adjusted to reflect changes in population or economic growth? Second, do the western states receive similar central banking and research services from the Federal Reserve, as do other areas of the country where Reserve Banks serve smaller geographic areas or populations?” May 1, 2001.

Federal Reserve Bank of St. Louis. "Location of the Reserve Districts in the United States,” 1914, https://fraser.stlouisfed.org/title/?id=606.