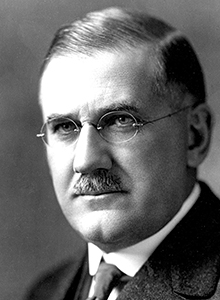 Theodore Wold was the first governor and chief administrative officer of the Federal Reserve Bank of Minneapolis, serving from the Bank’s inception in October 1914 until his resignation on October 1, 1919, when he became first vice president of the Northwestern National Bank of Minneapolis.

Wold was born on the heels of the Civil War in 1868 and educated in the Decorah, Iowa, public schools. Prior to joining the Minneapolis Fed, Wold had twenty years of banking experience in several Minnesota communities, including Elbow Lake, Little Falls, and Winona, and was president of the Scandinavian National Bank in Minneapolis from 1910 until assuming his Minneapolis Fed position.

Although leadership was shared with Federal Reserve Agent John Rich, Wold was in charge of the Bank’s day-to-day operations, and he assembled and organized the first group of employees. The Bank opened with nine officers and staff workers, but Wold oversaw massive staff growth during and following World War I, when the Bank issued war bonds as agent for the Treasury Department. By the time Wold left the Minneapolis Fed, he was coordinating a staff of nearly 500, 40 percent of whom were women, in three different Minneapolis locations.