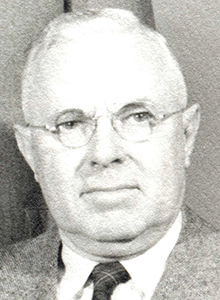 Evans was born in Cedar Rapids, Iowa, in 1890. He received a bachelor’s degree in civil engineering from Iowa State College.Evans worked with a New York construction company for a short time after graduation. In 1916, he joined Allied Machinery Company of America, leaving temporarily in 1918 to serve in the US Army for ten months. In 1921, he left his position at Allied Machinery to move to Laurens, Iowa, and become a livestock farmer.

Because of his knowledge of farming operations, Evans was appointed regional representative of the Corn-Hog Section of the Agricultural Adjustment Administration in 1933. He later became chairman of the Iowa Corn-Hog Committee in Des Moines.

In 1936, Evans became special assistant to the secretary of Agriculture in Washington, DC. He served in that capacity until October 1938, when he was appointed administrator of the Agricultural Adjustment Administration. He held that role until his appointment in March 1942 to the Board of Governors.

Evans' papers are housed at the University of Iowa Libraries.