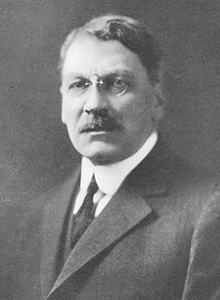 John U. Calkins became the second governor of the Federal Reserve Bank of San Francisco on May 6, 1919. He was required to retire on February 29, 1936, after the Board of Governors decided it would no longer approve appointment of any president or vice president older than seventy or who would turn seventy during a five-year term.

Calkins was born in 1863, in Ashtabula, Ohio. His start in banking came in 1882 as a messenger for the Union National Bank of Chicago, where he worked for five years. He moved to San Francisco in 1888 and worked at the Bank of California for fifteen years. In 1903 he became cashier and managing officer of the University Savings Bank of Berkeley. After some time as manager of the Mechanics Savings Bank of San Francisco, Calkins joined the San Francisco Fed.

Calkins was a paying teller for the San Francisco Fed when it opened in November 1914. He became acting deputy governor and then deputy governor in 1916. While his predecessor, James K. Lynch, focused on managing the first and second Liberty Loans during the Great War, Calkins handled many of the Reserve Bank’s executive duties. His experience made him the board of directors’ choice to replace Lynch after his unexpected death in 1919. John Perrin, chairman of the board, said in the San Francisco Chronicle on May 11, 1919, “During the difficult period of war activities he has met these responsibilities with marked ability.”

In the 1920s, the Federal Reserve System began buying and selling government securities on the open market in order to adjust the amount of reserves available to commercial banks. The Tenth Annual Report of the Federal Reserve Board, recounting 1923, noted a “considerable development in the scope, purpose, and method of these open-market operations. The results of the year have demonstrated that open-market operations, when wisely timed and well- conceived, are, in a larger measure than has hitherto been generally appreciated, capable of giving effective support to the discount policy of Federal Reserve banks without an accompanying change of rates.”

Although the San Francisco Fed had conducted open-market operations on its own (they were first used to beef up the Bank’s earnings) and participated in some of the System-wide operations of the 1920s and 1930s, Calkins often opted out. He and some other Federal Reserve Bank governors of his time thought they were making money too easily and encouraging speculation.

During a May 1924 conference of Reserve Bank governors, Calkins said the original intent was that “operations of the Open Market Investment Committee might be so carried on as to avoid fluctuation in discount rates; in other words when the market was unduly easy we might take the money out of it, and when it was low we might put some money into it.” But, he argued, the committee was doing just the opposite.

In a letter dated June 16, 1930, Calkins explained why the San Francisco Fed had not participated in a recent round of open-market purchases. “With credit cheap and redundant,” he wrote, "we do not believe that business recovery will be accelerated by making credit cheaper and more redundant.”

Calkins died in 1954, at his home in Berkeley, California. He was ninety years old. 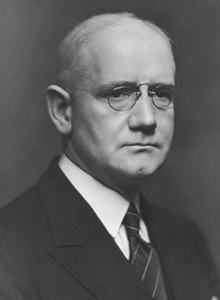