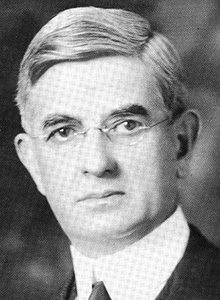 James B. McDougal was the first governor of the Federal Reserve Bank of Chicago serving from October 23, 1914, to March 1, 1934.

McDougal was born in Peoria, Illinois, in 1866. His first banking experience was with the Central National Bank and Trust Company of Peoria. After fourteen years with that bank, he received an appointment as a national bank examiner with assignments to Kentucky, Pennsylvania and St. Louis. Through his broad acquaintance among bankers, he was introduced to James B. Forgan, who at the time was president of the First National Bank of Chicago, and chairman of the Clearing House Committee for the Chicago Clearing House Association. In 1906, Forgan invited McDougal to come to Chicago to organize the Bank Examination Department of the Chicago Clearing House Association and to become its official examiner, an office he held until 1914.

When the Chicago Fed was established in 1914, McDougal was elected governor. He served for twenty years, until his retirement in 1934. As the first leader of the Chicago Fed, he was responsible for its organization, as well as the development and administration of its functions.

During McDougal’s presidency, the Chicago Fed was designated the switching center for a wire transfer network (Fedwire) that linked the twelve Reserve Banks, the Board of Governors, and the Treasury Department by Morse Code in 1918. In 1922 the new Chicago office building was completed and plans for construction of a new bank building in Detroit were approved. He also led the Chicago Fed during the bank failures in 1932 and 1933. 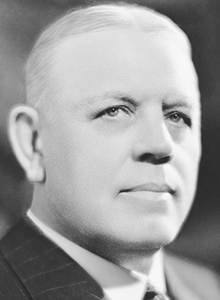