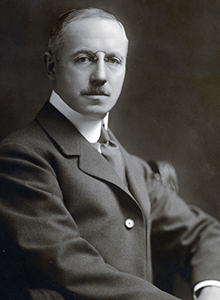 Ellis P. Passmore was the second governor of the Federal Reserve Bank of Philadelphia, serving from 1918 to 1920.

Passmore was born on a farm near Rising Sun, Maryland, in 1869. During his teen years, he worked at the National Bank of Rising Sun, starting as a general clerk and working his way up to bookkeeper during his five years on the job.

In 1889, Passmore was accepted at Swarthmore College, where he studied for several years before embarking on a career in banking. His first post after leaving college was cashier of the National Bank of Avondale, in Chester County, Pennsylvania, where he started in 1891 and remained for ten years. Upon leaving the bank in 1901, he became cashier of the Traders’ National Bank in Scranton, Penn., a position he held until 1902, when he resigned to become assistant cashier of Franklin National Bank in Philadelphia. He held that job for two years before becoming cashier, and subsequently rose to the vice presidency in 1910.

Passmore left Franklin National in 1918 to accept the governorship post at the Philadelphia Fed, the role known today as president. As World War I persisted, the Federal Reserve System was charged with helping to fund the war effort in Europe. Passmore oversaw the Liberty Loan Committee, which managed campaigns to sell war bonds to American citizens, and led five Liberty Bond drives that exceeded their subscription goals. During his time at the Philadelphia Fed, he also oversaw the Reserve Bank’s raising of its discount rate for the first time, an effort to curtail inflation and slow the pace of member bank borrowing.

After running the Philadelphia Fed for two years, Passmore resigned in 1920 to head the oldest bank in the United States, the Bank of North America, established in 1781. When that institution merged with Commercial Trust Company in 1922, he was elected as head of the new entity, the Bank of North America and Trust Co., and he remained in that position until he died in 1928.

Other positions Passmore held during his years in banking include president of the Pennsylvania Bankers’ Association, chairman of the Committee on Banking and Currency of the Philadelphia Chamber of Commerce, and director and vice president of the Bank Officers of Philadelphia. Throughout his adult life, the Phi Psi Fraternity alumnus also remained involved with Swarthmore College. He was elected a member of the school’s board of managers in 1919 and treasurer in 1922. Passmore served in those roles until the time of his death. 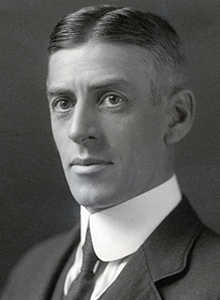 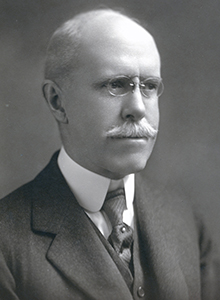