Andrew W. Mellon served as secretary of the Treasury from March 4, 1921, to February 12, 1932. Under the provisions of the original Federal Reserve Act, this meant he was also ex-officio chairman of the Federal Reserve Board.

Mellon was born in Pittsburgh, Pennsylvania, in 1855. He graduated from the Western University of Pennsylvania in 1873. In 1874, he joined his father’s banking firm, T. Mellon & Sons, and in 1882 his father transferred bank ownership to Mellon.

Mellon began expanding his firm into industrial fields such as aluminum, steel, oil, coal, and coke by providing capital for corporations. Mellon’s financial backing led to the creation of the Aluminum Company of America and the Gulf Oil Company. He also helped found the Union Steel company, which eventually merged with United States Steel Corporation. In 1889, Mellon helped organize the Union Trust Company and Union Savings Bank of Pittsburgh. By the 1920s, Mellon was one of the wealthiest men in the United States.

In 1921, President Warren G. Harding appointed Mellon to lead the Treasury. He was tasked with reducing the large federal debt that resulted from World War I. Mellon sought to increase revenue by lowering tax rates in the hopes of both stimulating economic activity as well as increasing overall tax revenue by encouraging more people to actually pay their taxes. His plan cut taxes across the board and was enacted by Congress in the Revenue Acts of 1921, 1924, and 1926. The top marginal tax rate fell from 73 percent in 1922 to 24 percent in 1929. Mellon’s policies proved effective in lowering the national debt, but the onset of the Great Depression caused the debt to rise again, and the top tax rate increased to 80 percent.

As an ex-officio member to the Federal Reserve Board, Mellon favored interest rate hikes to help curtail speculation in 1929 and was against stimulus packages. As the economy failed, Mellon’s critics called for his ousting. In 1932, he resigned from the Treasury amidst accusations of improper business ties and impeachment proceedings. He was appointed ambassador to England, a post he held from 1932 to 1933.

Mellon was an avid collector of art and in 1937 he donated $10 million to construct the National Gallery of Art in Washington, DC He also founded the Mellon Institute of Industrial Research with his brother in 1913, which later became Carnegie Mellon University. 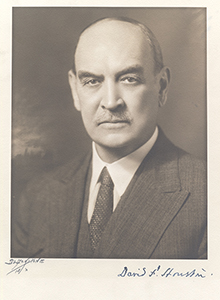 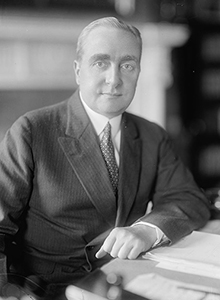